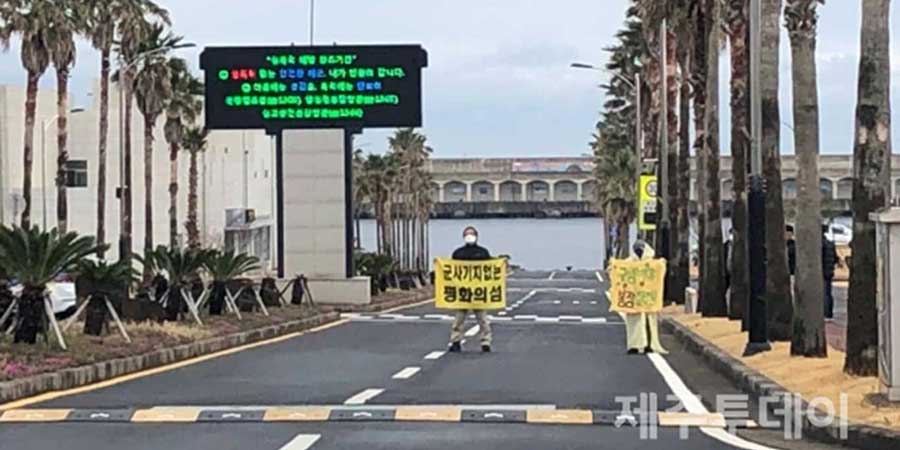 Bro Song and Bokhee hold the banners in the Jeju Naval Base on March 7, 2020

Brother Song Kang Ho and Ryu Bok Hee visited the remaining part of Gureombi Rock inside the Jeju Navy Base on March 7, 2020 in commemoration of the 8th anniversary of the blasting of Gureombi Rock in 2012. On March 30, 4,700 people signed a petition calling for the two to be released during their trial for trespassing. Ryu Bok Hee was briefly detained and released on the 30th. On April 3 the court reviewed the legality of Brother Song’s arrest warrant. Even though 2,448 people signed the petition calling for his release, Brother Song was not released.

Please take a moment to write a letter to him. There are no specific regulations about letter size, but unfortunately, sending books is not allowed.

The letter below is what we want to speak to the court, the Navy, the government and fellow citizens.

Together with Song Kang Ho and Ryu Bok Hee, we question the legitimacy of the Jeju Navy Base, established over the objections of the residents of Gangjeong Village. Jeju natives call their island the Jeju Peace Island. We stand in solidarity and work with them for peace, as Jeju, the Korean peninsula, even East Asia, and the world face the intrusion of military bases.

The state should be just and democratic, but in Jeju its methods were unjust and undemocratic. The state threatened citizens and destroyed the sacred, ecological wonder of Gureombi Rock to build a military base in 2012. President Moon Jae-in visited Gangjeong Village himself during the Fleet Review in 2018 and apologized to the Gangjeong villagers. According to the 2019 investigations of Jeju Navy Base construction incidents, government bodies and the military were directly involved in committing serious human rights violations and inciting division among Gangjeong residents. A Jeju poet witnessing this process wrote, “Gangjeong is 4.3,” referring to April 3, 1948, when the state massacred Jeju citizens for calling for unified independence and protesting U.S. control of Korea. We are citizens who have witnessed and experienced the state violence as it has continued over the past decade, and we speak out against this state violence carried out with impunity.

Song Kang Ho and Ryu Bok Hee keep raising questions so that these misfortunes do not repeat. They feel the pain of everything that is mercilessly destroyed by the military bases. Brother Song remains incarcerated for this public witness for peace and for the rights of the people.

The particulars are as follows:

Ryu Bok Hee’s banner was made with friends for this 8th anniversary of the blasting of Gureombi Rock. The state says that since its construction, the Navy Base is complete. They say it’s finished. The conflict the state and the military stirred up, is supposed to be forgotten. But we are reminded of the people, the environment, and especially the values of democracy and peace which are perpetually harmed by the persistent presence of the base. Thus we personify Gureombi as a child taking a nap, and we ask Gureombi to quickly rise up. That’s why the banner says “Gureombi, did you sleep well this spring?”

In 2005, Jeju declared itself an “Island of World Peace.” Demilitarization was an important precondition in the planning stages. The Jeju University Peace Research Center presented, ‘Tasks for designating and promoting Jeju as a World Peace Island’ on October 10, 2003, and reported the citizens’ opposition to the plans to make a navy base in Hwasun harbor. They said that Jeju did not have to be “an arena of competition between two powers, but instead it could be a buffer between two powers, and could become a neutral reconciliation zone.” As divided loyalties in Jeju began to promote the navy base construction, the road-map for making Jeju a demilitarized peace island began to collapse. However, Gangjeong Village, where the base was built, has led the anti-navy base movement and nonviolent peace movement for the demilitarization of the Jeju Peace Island. Song Kang Ho and Ryu Bok Hee have endlessly insisted that Jeju must be a demilitarized peace island, ‘Demilitarized Peace Island!’ This is why activists gathered and remain in Gangjeong Village and continue the struggle for peace. Since then, Song Kang Ho carries around his banner.

In June 1999, three women, Angie Zelter, Ulla Roder, and Ellen Moxley entered Faslane navy base in Scotland and destroyed computer and other special equipment for Trident nuclear submarines in the Maytime floating laboratory. They hung up photos of Hiroshima and Nagasaki, destroyed by nuclear bombs, and a banner reading “Stop the nuclear testing of death!” That time, as well, the police and military arrived three and a half hours later. The three women who destroyed nuclear submarine materials argued that they were not guilty. They argued that the Trident is a 48 million ton submarine that can launch a nuclear missile. Just one Trident missile has eight times the destructive capacity of the bomb dropped on Hiroshima in 1945 killing 150,000 people.

On October 20, 1999 at Greenock Sheriff Court, Judge Margaret Gimblett declared these three women not guilty. She ruled that because their crime of destroying the nuclear submarine system was an act to prevent the even greater crime against humanity posed by the nuclear submarines, it could not be considered illegal.

In Jeju, to bring about peace in the world and preserve democracy citizens must speak up when the state sanctions violence and violates its own values. The Korean government incited  division among Jeju citizens and built a military base in the face of persistent opposition. The judgement of the Korean military is that entering the Military Protection Area is a serious threat to national security. To the contrary, this kind of earnest desire and awakening for peace are just the very kind of steps we all, including the military, must take to build a momentum for true peace in the world. Brother Song Kang Ho’s body may be detained, but that will not detain the call of his conscience and his free will for true peace and just procedures.