Skip to content
Witnessing Conscience in Action: A Rare Story from Nepal

Witnessing Conscience in Action: A Rare Story from Nepal 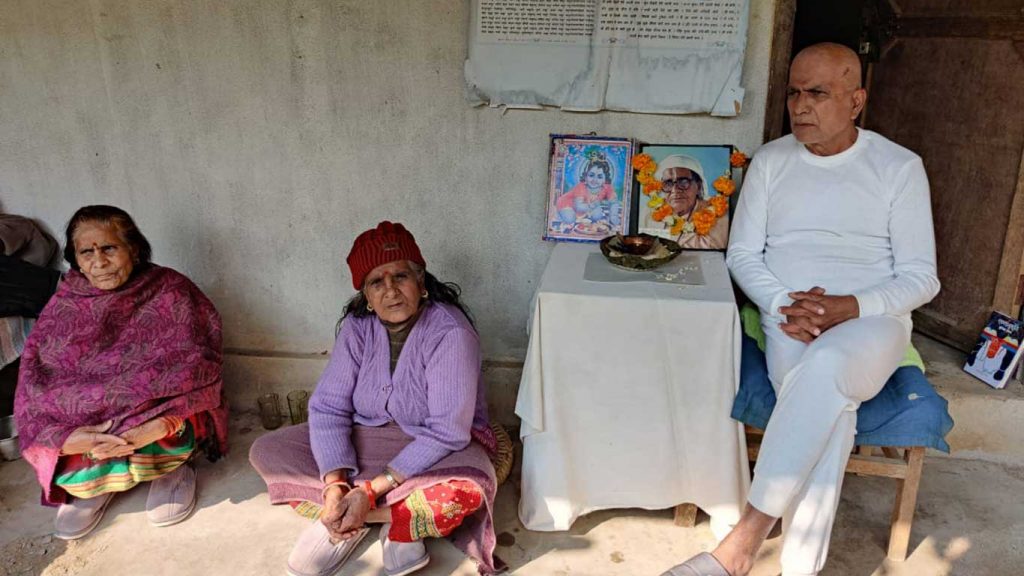 Kausila Devi Gautam- 98, from Ilam municipality in the eastern part of Nepal, passed away on 2nd December 2020. She was my maternal grandmother and a devoted Hindu. I travelled to Ilam on 3rd December to attend the funeral and mourn with the rest of the family.

When a member dies in a Hindu Brahmin family, the corpse is taken to the nearby river to be cremated. Relatives, neighbours and community join the immediate family through this ritual. Mostly, males go to the river and females carry and serve snacks for the cremators on the way back home. Once the cremation ritual is finished, the immediate family members gather at home for thirteen days to mourn along with several daily rituals led by a priest. Sons shave their heads, partially cover their bodies with unsewn clothes, and abstain from salt, alcohol, meat and spices among other things. They perform daily rituals for thirteen days. Daughters, daughters in laws and the wife in case of a husband’s death cook and clean for the mourners. From the fifth day, a priest preaches Garuda Puran (a Hindu mythical story). At the end the family, especially sons, donate several things including money and a female calf to the priest or priests, as a sacred duty. The whole purpose of those rituals is to pave the way to heaven for the departed person. If the ritual is not followed- as is believed by the society and the Brahmin caste- the dead person will go to hell and the rest of the generation will have to suffer badly! 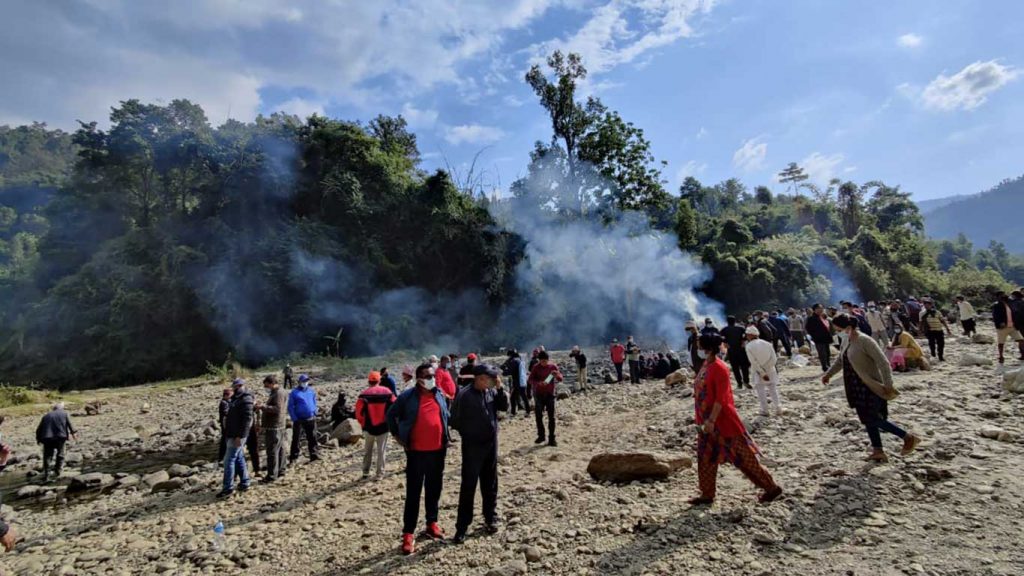 Kausila’s son, who also is my maternal uncle, Dharma, approached this whole process differently and did not follow the conventional rituals. He says- he listened to his conscience and firmly stood without fear of family, society and the religious preachers to practice what he believed was right. He cremated his mother on a river bank but unlike others buried the ashes and leftover wood in a pit. Whereas, people used to throw such ashes and leftovers on the river. He also did not follow the priestly rituals while cremating and afterwards for thirteen days at home. Because, as his conscience says-neither we nor the priest can mediate and guarantee the trail to and seat in heaven for the dead person. Rather, it is the person’s own deeds in life that will make hell or heaven. Dharma did take time to mourn- resting, eating once a day, talking with the visitors and explaining why he chose this way to mourn with his two sisters for thirteen days. He says it was his responsibility to respect his sisters’ views too while he is firmly standing for his own.

On the river bank while the dead body was being prepared for cremation- Dhama’s family members, relatives, villagers and the priests were asking, almost trying to force Dharma to follow all the rituals. He was questioned for his conscience, and told that his decision was wrong and sinful. He was directly and indirectly threatened that his next generations will have to suffer because of this. He was reminded that this is against tradition and social values. A few even whispered in the corners that he will be boycotted by relatives, Brahmins and the society. As a witness, family member and a peace worker, I was curious to observe his response to this intense atmosphere. In such a situation, where Dharma was on one side and the rest of the people were on the other side, he was still calm and able to stand firmly for what his conscience was telling him. He did not get angry or furious at anyone. He never said he is right and others are wrong. Neither did he criticize anybody or put himself up for what he was doing. He followed his heart which people can rarely do. Dharma’s choice was rare, not only in his community but also in the whole country.

Many people in Nepal have been discussing and wanting to change the existing lengthy mourning period, which is thirteen days, and the rituals. Some say it should be five days, and others say seven, but it continues to remain the same though many of the people find it unrealistic, untrue and so unnecessary. No one dares to stand to say no to what does not seem right. It has become the talk of the town and will remain so for years to come. Many are saying that there will be many others in the coming days to follow what Dharma chose to do and stood for. We needed someone to tie the bell around the cat’s neck. Dharma did.

On the last day of the mourning period, Dharma and his family donated some rice and money to a school where such support was much needed, and that was his closing ritual for his mother. Why was he able to stand against the sociocultural tide? Maybe because he knew what and why he was doing. He could face all the challenges in such a calm and gentle way maybe because he knew how to remain in his core self while the circumstances were tough. In addition, maybe he could do so because he valued more what was right and what his conscience was telling him rather than continuing to be swept along by the fear and force of the society. 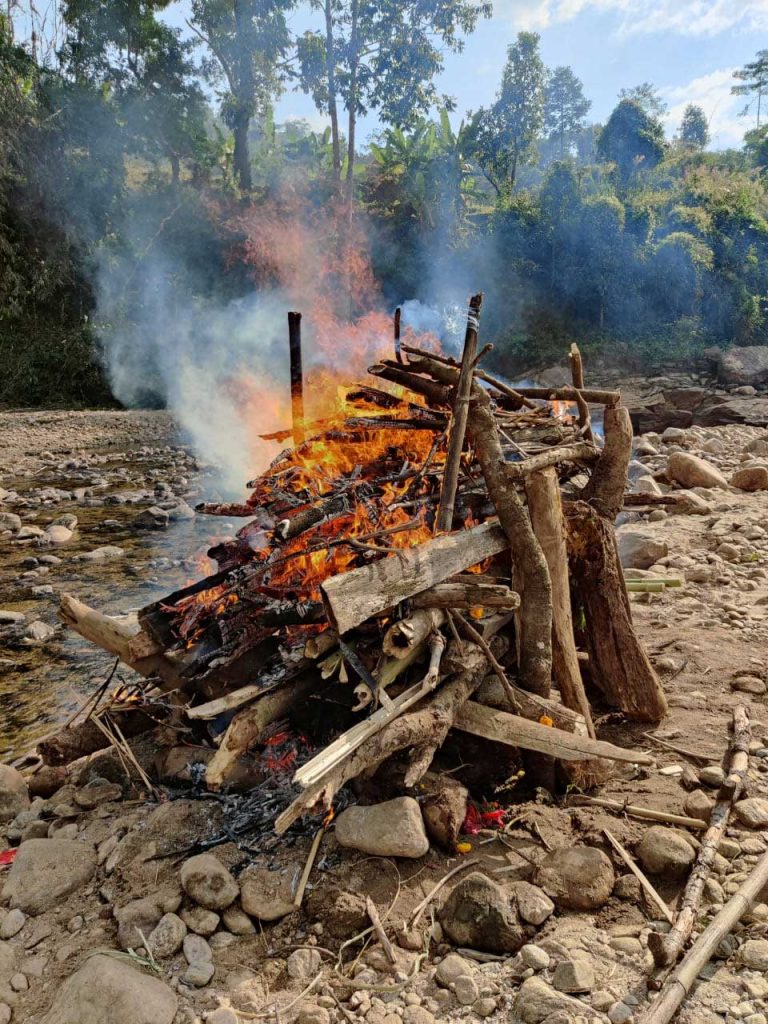