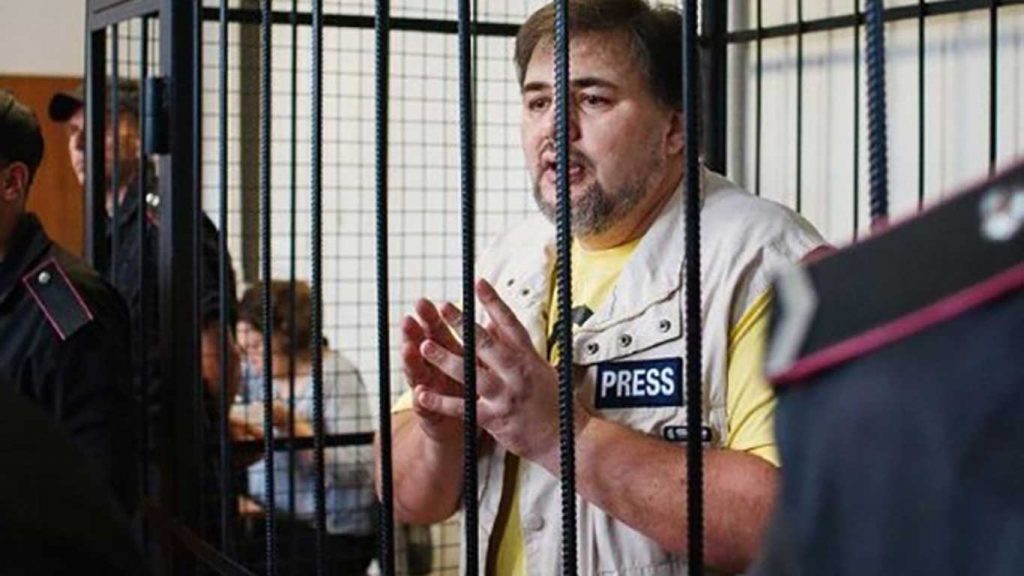 Subhash Chandra serves as an executive board member for War Resistance International (WRI). The Ukrainian Pacifist Movement (UPM) is a WRI affiliate, through which WRI supports and strengthens the pacifist movement in Ukraine. The current Russian invasion of Ukraine has been a testing ground for cyber-enhanced invasive warfare that threatens us all globally today.

“The smell of rotting human flesh haunts me from the beginning of summer when my first trip to the area of hostilities (in the Ukraine) began. I spent too many sleepless nights and saw too many smoldering corpses to be silent after that,” wrote Ruslan Kotsaba from behind bars in 2015.

Ruslan Kotsaba aired a YouTube video, with almost half million views, calling to boycott Ukrainian mobilization into the armed conflict in Eastern Ukraine. Ukrainian Security Service arrested him for treason and obstructing military operations. In the video, he said he would rather go to prison than deliberately kill his compatriots in Eastern Ukraine.

“I believe that even a bad peace is better than a good war because I am a Christian and patriot of Ukraine,” he explains, “I have recorded dozens of interviews with combatants in the warring parties, and the most regrettable thing is that both sides fight and are ready to die for their homeland.” At the trial, he said he had rarely thought about the commandment “Thou shall not kill” until he saw the hell and horrors of internationally-assisted fratricide of Ukrainians on both sides of the armed conflict. That experience crystallized his pacifist views.

Under the rule of the Soviet Union, Ruslan served his mandatory draft in the Soviet army in 1984-1986, even though he was active in the student movement demanding Ukrainian independence and condemning Russian imperialism. After serving his draft term he was educated in ecology and public administration and had a successful career in the Ukrainian civil service for over a decade. He quit to go into politics because he felt the country needed democratic reforms. He supported the Orange Revolution and became regional Chair of Yellow Pora party. 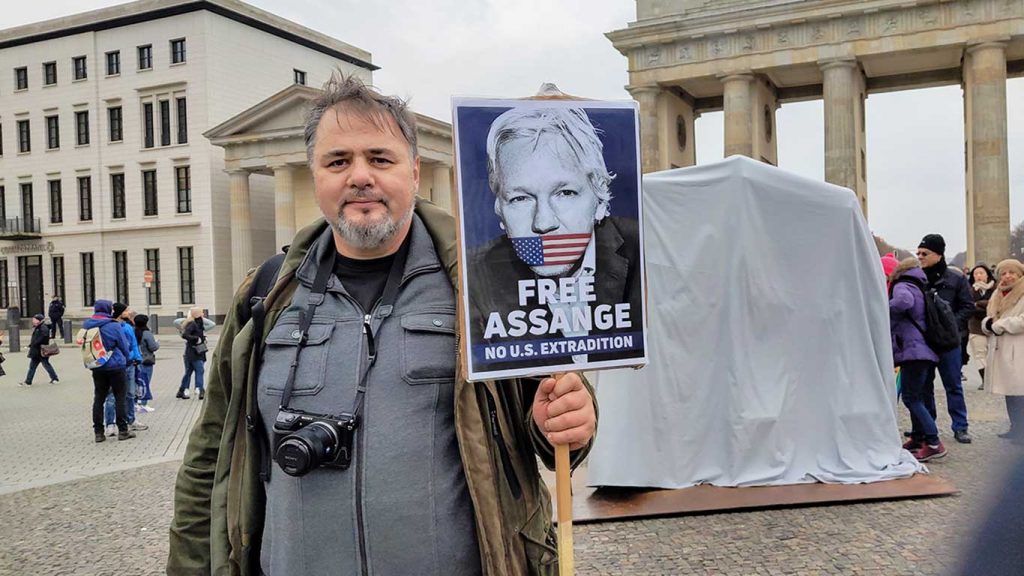 Ruslan Kotsaba then worked for three years as a local TV reporter and became a popular video blogger. In 2013, he filmed and commented on the struggle of Euromaidan and reactive Anti-Maidan political movements that led to an escalation of tensions and violence. Euromaidan, literally Eurosquare, refers to a wave of public protests in Ukraine beginning 21 November 2013 on the Nezalezhnosti Square in Kyiv, demanding Ukrainian integration with Europe rather than increasing ties with Russia. These protests led to the resignation of Prime Minister Azarov’s government and the ousting of President Yanukovych. By January 2014, protests were fueled farther by charges of widespread government corruption, abuse of power, and violation of human rights in Ukraine.

Ruslan’s videos drew attention, and he was hired by a national TV channel to report on the 2014 hostilities in Eastern Ukraine. As a war correspondent, he traveled to the frontline of the Donbass conflict going through Novoazovsk to Kramatorsk, interviewing people on both sides of the conflict. He criticized the military on TV and YouTube. In 2015, when President Poroshenko announced military mobilization, Ruslan posted a video blog entitled “I oppose the mobilization.” Ruslan Kotsaba was then invited to a Russian talk show where he called for a cease in the violence and a start to peace talks.

Ruslan Kotsaba was arrested and jailed in the Ukraine for 524 days, charged with the confiscation of property for alleged crimes of expression of his pacifist views and his vigorous refusal to kill fellow human beings. The Ukrainian prosecution demanded a 13-year prison sentence. Ukrainian human rights defenders and pacifists demanded the charges be dropped and that he be acquitted and released as a prisoner of conscience. But every day of Kotsaba’s trial the court was besieged by right-wing groups demanding to punish “the traitor.” The prosecution brought dozens of them as witnesses of alleged harm his video caused to the war effort. Most of the witnesses said that they served in Anti-Terrorist Operations in Eastern Ukraine, they were outraged by Ruslan’s video, and they believed his video obstructed military mobilization. 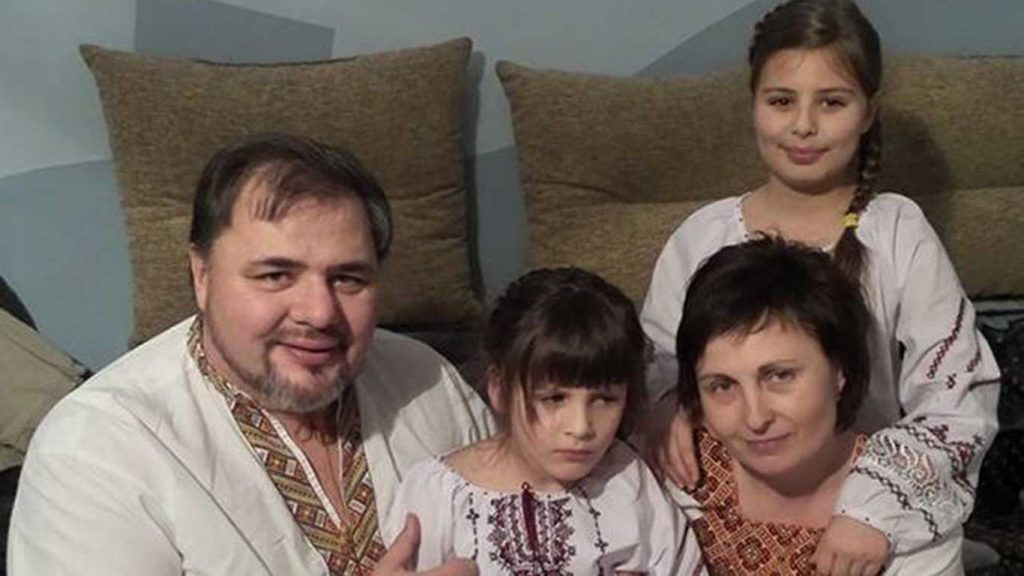 In 2016, the Ivano-Frankivsk City Court acquitted Kotsaba on the charge of treason but sentenced him to 3.5 years for “obstructing the legitimate activities of the Ukrainian Armed Forces.” Then Ivano-Frankivsk Oblast Court of Appeal acquitted him on all charges and released him in the courtroom on 14th July 2016. But the political vendetta persisted. Surrounded by an aggressive mob, the High Specialized Court on Civil and Criminal Cases quashed Kotsaba’s acquittal in 2017 and ordered a retrial. He was acquitted again, and again acquittal was quashed. Judges and local courts started to recuse themselves from the case, avoiding involvement in this political prosecution.

Ruslan Kotsaba, a 53-year-old father of two daughters, was hosting his own show and reporting political events on Ukrainian television. Last International Conscientious Objectors’ Day he launched a phone poll on TV in which 91% of the 578 participants voted against conscription. One of the recent projects in which he participated was a live-streamed dialogue between Kyiv and Donetsk public figures discussing how to achieve peace. Also, he is president of the Ukrainian Pacifist Movement which advocates for human rights, peace, and conscientious objection to military service. From the 2nd February 2021, Ruslan is out of job because the government cancelled the KRT television license claiming it opposes Russian propaganda.

Ruslan is on trial again in Kolomyia City District Court of Ivano-Frankivsk Oblast, and the threat of imprisonment persists. War Resisters’ International, European Bureau for Conscientious Objection, International Fellowship of Reconciliation, and other peace organizations called for the end of the political persecution of Ruslan.

Now Ruslan is going through a lot of hardships. The TV channels he worked with are officially proclaimed enemy voices by the government and taken out of the air. On the first day of his retrial, 22 January 2021, the violent mob attacked Ruslan, his lawyer, and his mother under the court shouting “Death to the enemies! Ukraine above all!”. But he refuses to feel intimidated or regret his 2015 video blog. Recently Ruslan Kotsaba published a new video blog, in which he remembered what happened during the six years after he spoke up, calling again to stop the war and commemorate all people, especially all the children, killed on both sides.