By German Kuznetsov-Valin, Set in Russia 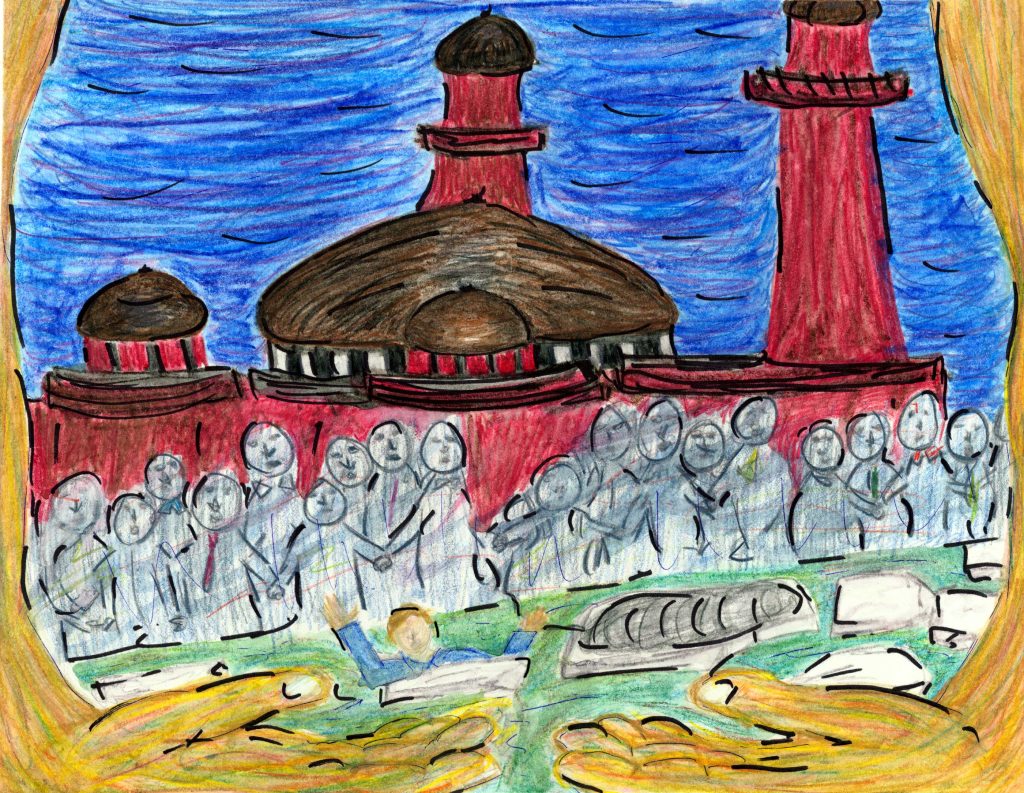 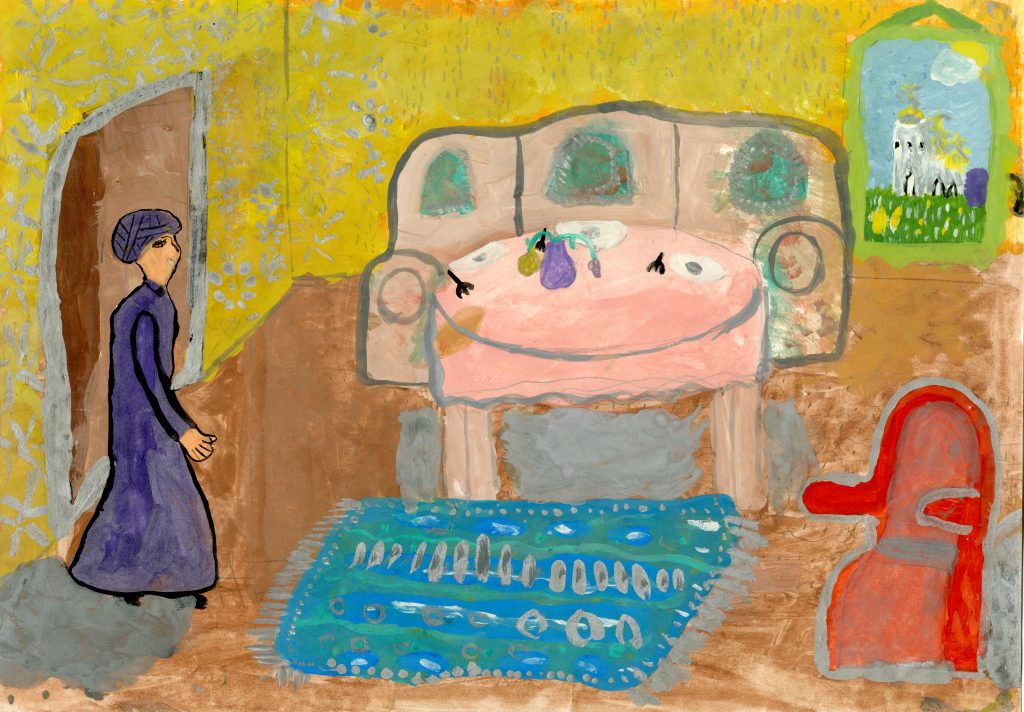 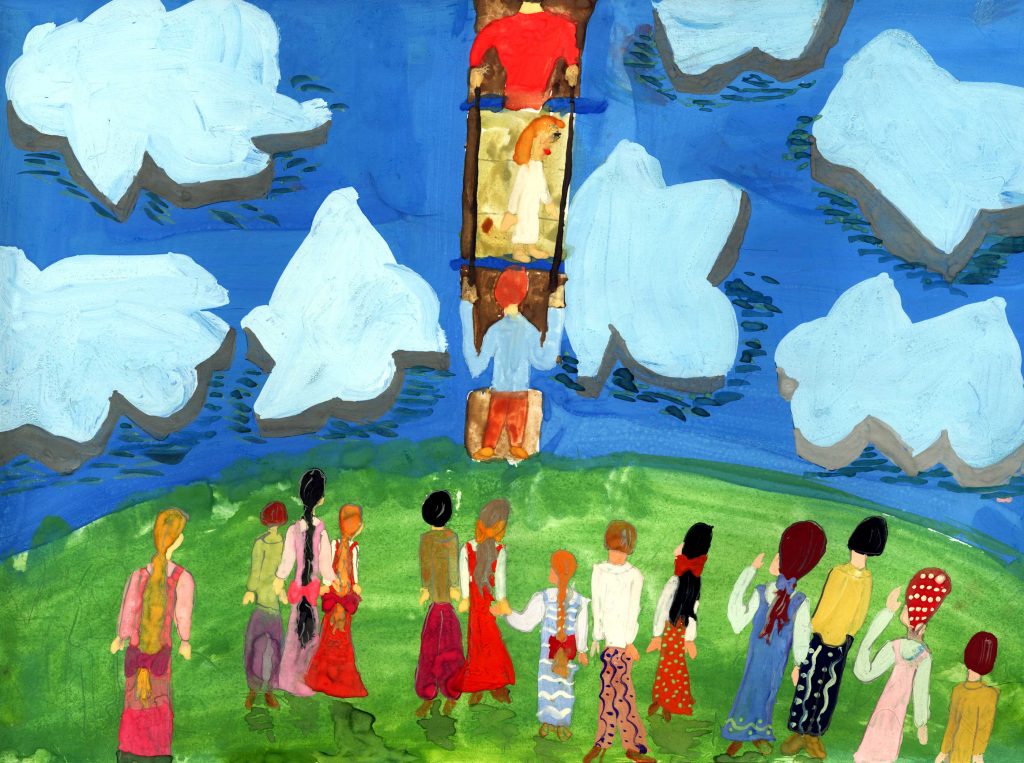 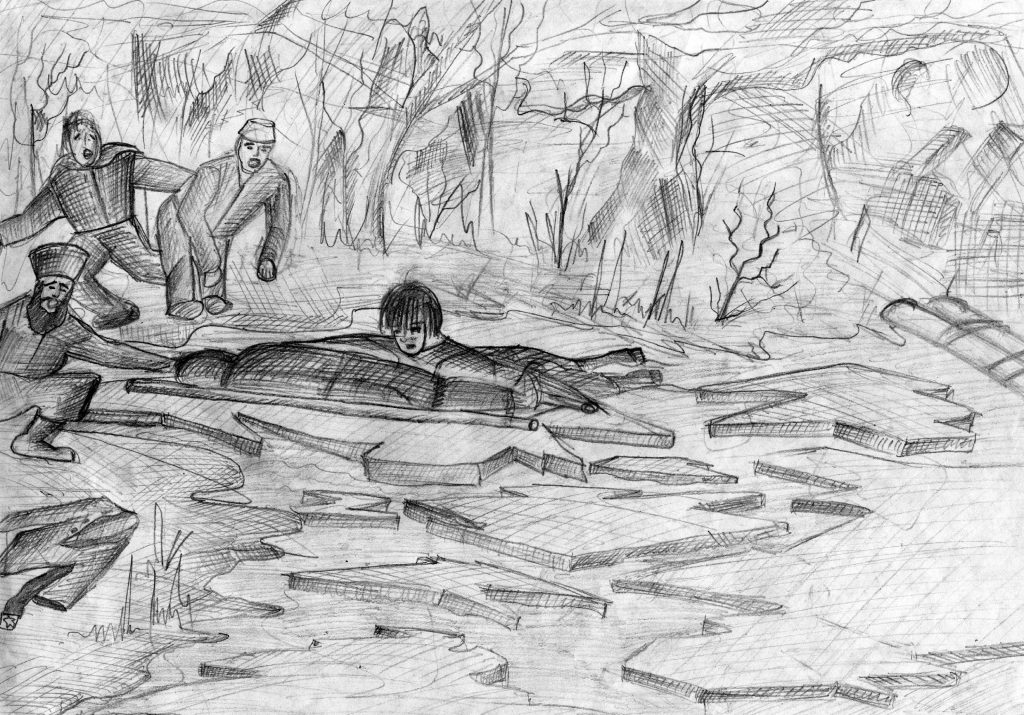 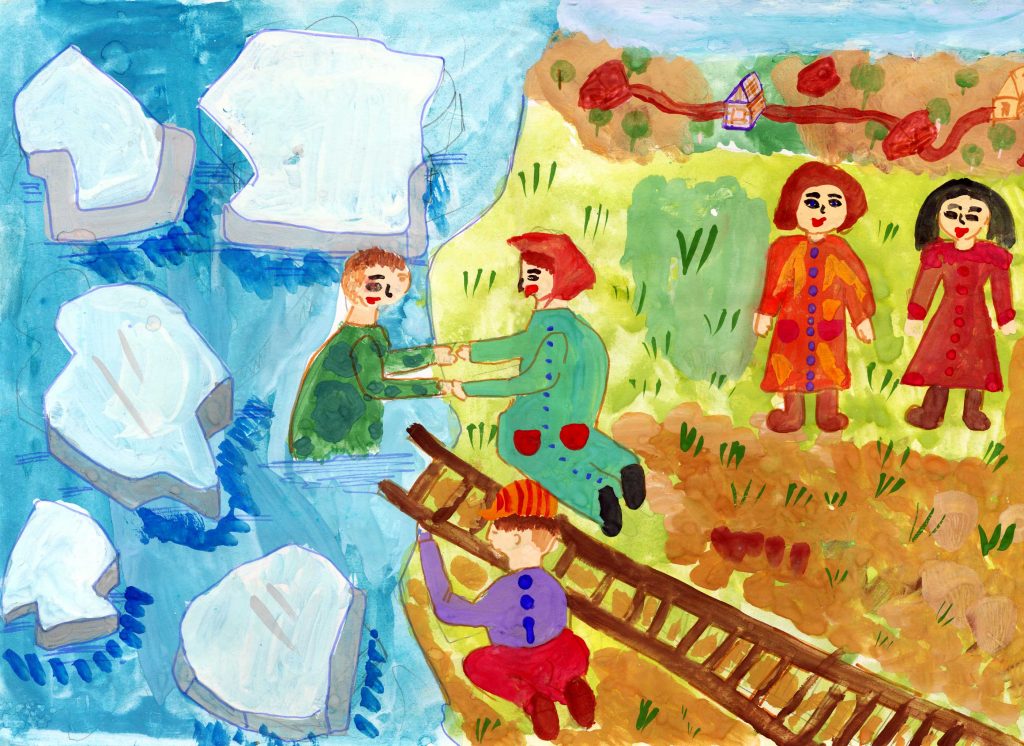 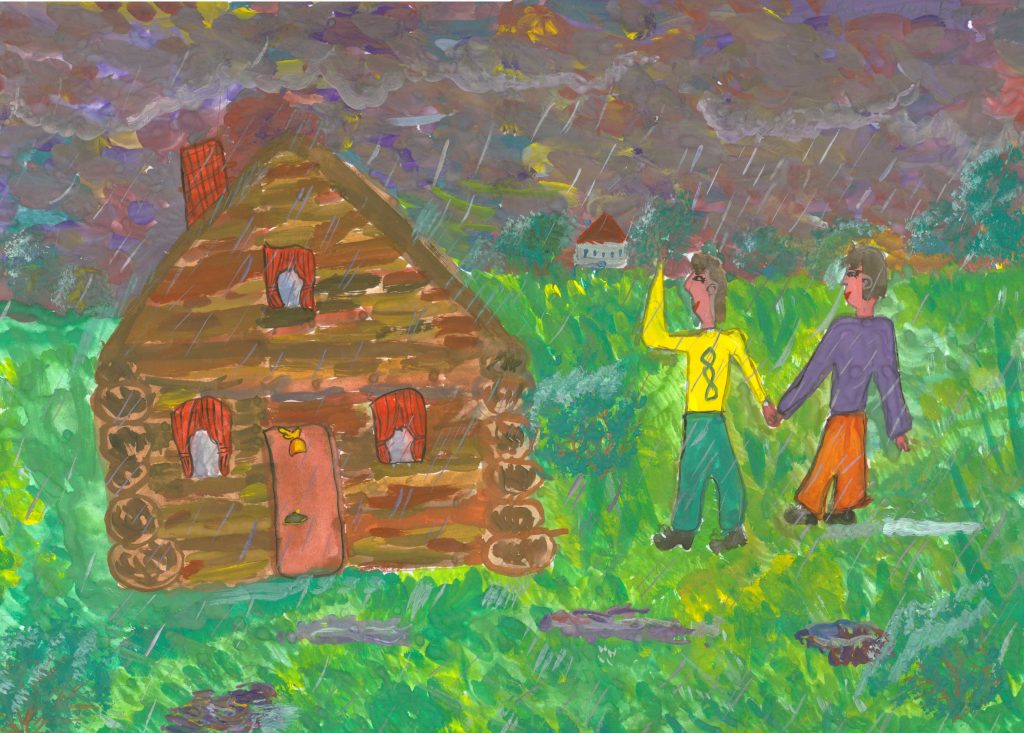 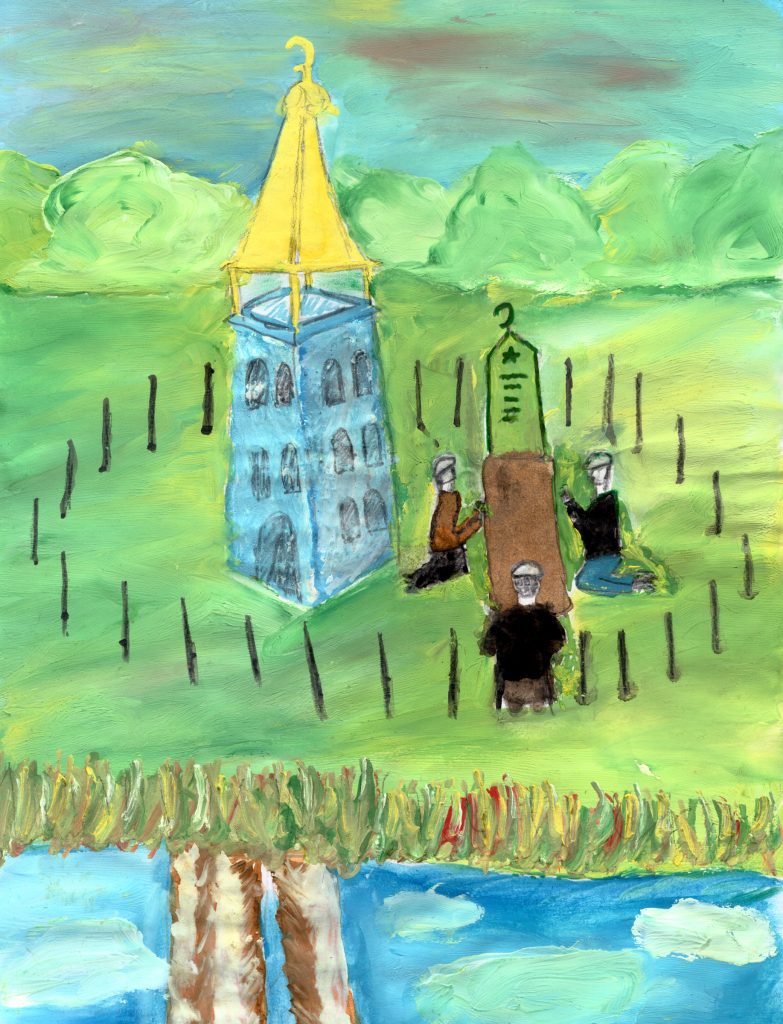 In memory of my mother, Khafiza Abdulonova, the blacksmith’s granddaughter.

One day my friend and I were caught in a cloudburst and soaked to the skin. His friend, Akhmet, who lived nearby, let us come in to dry out and gave us a warm welcome. The first thing I saw was a large color photograph on the wall in an expensive frame.

“Do you like it?” said Akhmet “They call it the Rashida Mosque. There are two very interesting stories about it. But first, let’s sit. Let’s get you warm and dry.”

As we drank tea flavored with buckwheat honey, Akhmet told us the stories.

The mosque graces the banks of the Medyanka River, which flows by the village of Medyana in the district of Nizhny Novgorod. That’s where Akhmet comes from.

The first story happened long ago.

Ismail Khairetdinov was a wonderful blacksmith. He was known throughout the area. He could make anything, and not just out of metal. There was no job he could not do. People came from far and wide to ask his help. He never turned them down.

One sad day, Ismail was found dead in the smithy. His heart had failed. The village was cast into deep grief. Grown-ups wept. The children were quiet. Everyone came out for his funeral. A long procession made its way toward the cemetery on the other side of the little river. In summertime the Medyanka River flowed calm and quietly. Now it was in full spring flood. Overnight, ice and water from the mountains had washed out all the bridges, and further down, rushed over rocks in the rapids.

They thought they had found a way, though. The men struggled to build a temporary crossing out of beams and planks, but it looked extremely dangerous to carry the bier across.

The shrouded body was tied firmly to the bier. Two men carefully crossed over to the other bank. Pulling on a rope attached to the bier, they pulled it across the bridge. When it was half way across, disaster struck. The rope, slippery from the cold, got away from their numb fingers. The bier slithered on the icy planks and slid onto a sheet of ice floating downstream. The current took hold of the ice sheet with its sad load and carried it away. The rapids were just downstream.

People ran after the bier along the bank, shouting in Tartar and Russian. They had no idea what to do. A young Russian soldier heard the cries of the Tartars and realized what was happening. He peeled off his greatcoat and leapt into the icy water. The ice-sheets knocked the rescuer off his feet, almost crushing him. The current dragged him towards the rapids.

But the soldier managed to grab the rope tied to the bier. He pulled the whole ice sheet to the bank. The villagers rushed up and hauled the soldier out of the icy water. Then they dragged the bier, bearing Ismail’s body, safely up onto the bank.

The soldier’s face and hands were streaked with blood. His clothes began to freeze. Women threw the soldier’s greatcoat over him and took him away to get warm in a nearby hut. They left the hero in the care of an old woman there and returned to the funeral procession.

It was pointless to try to take Ismael’s body across the river to the cemetery that day. They left the bier with the body in the old, tumbledown mosque. A group of leading citizens went back to the hut where the soldier had been left to thaw out. They were anxious to thank him for his good deed, but the young man was gone.

The old woman said, “The soldier was called Fyodor. He had hair as fair as flax and eyes as blue as God’s heaven.” When he took off his undershirt to wring it out, she had noticed that he wore a cross on a string around his neck. He had said he was going to see his mother. What was his surname? Where, precisely, was he going? The old woman had never thought to ask! What more could she tell them? His leave was nearly up. He had got warm and dry and then gone on his way. Next day after the funeral, the Muslims went to all the surrounding villages trying to find the Russian soldier. He was not to be found.

The second story is about the new mosque. The old mosque had been in bad shape for years. There was too much trouble and not enough money to build a new one. Finally, things got better. The Muslim villagers collected enough money for materials and invited anyone who could to help with the construction. All kinds of people worked together to build it. While the work was going on, you would hear the distinctive chatter of Muscovites, Ukrainians, Belorussians and people of the Caucasus. Everybody was friendly and nobody bothered about anyone’s nationality. A man won respect according to the work he did.

They professed different religions, but they lived together as one family. After surviving repression, war and hunger, they came together to build a house of prayer for their fellow villagers of the Muslim faith.

Vasis, a local businessman, had donated a great deal of money toward building the new place of worship, so he was asked to name the new mosque. He called it Rashida in honor of his mother.

At the opening ceremony, Vasis declared that the mosque was a gift to all the mothers of Medyana Village. Thus the mosque, bearing the name of one mother, became a symbol of the love that all the sons have for the mothers of their village.

To many, it extends beyond that to commemorate the selfless help given by people of many nations to one another, and honors the faith which people have in each other.

For Akhmet and his fellow villagers, the Rashida Mosque serves as a monument to Ismail the local blacksmith, and to the heroic deed of a young Christian Russian soldier whose life is linked with Ismail’s memory.

The tales had been told. The storm was over. It was time to go. Before I left, I looked around the room once more. A beam of sunlight set the Rashida Mosque in the photograph glowing with all the colors of the rainbow.