The House that Love Built 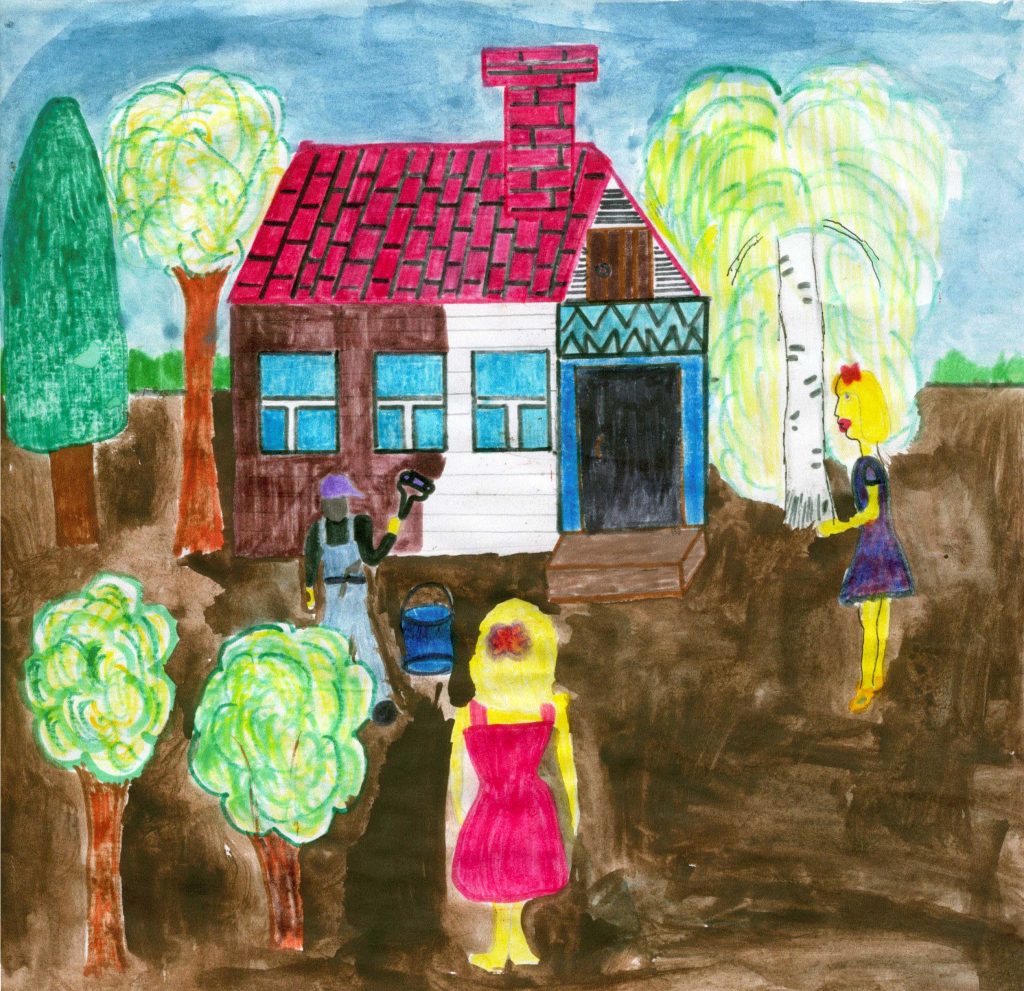 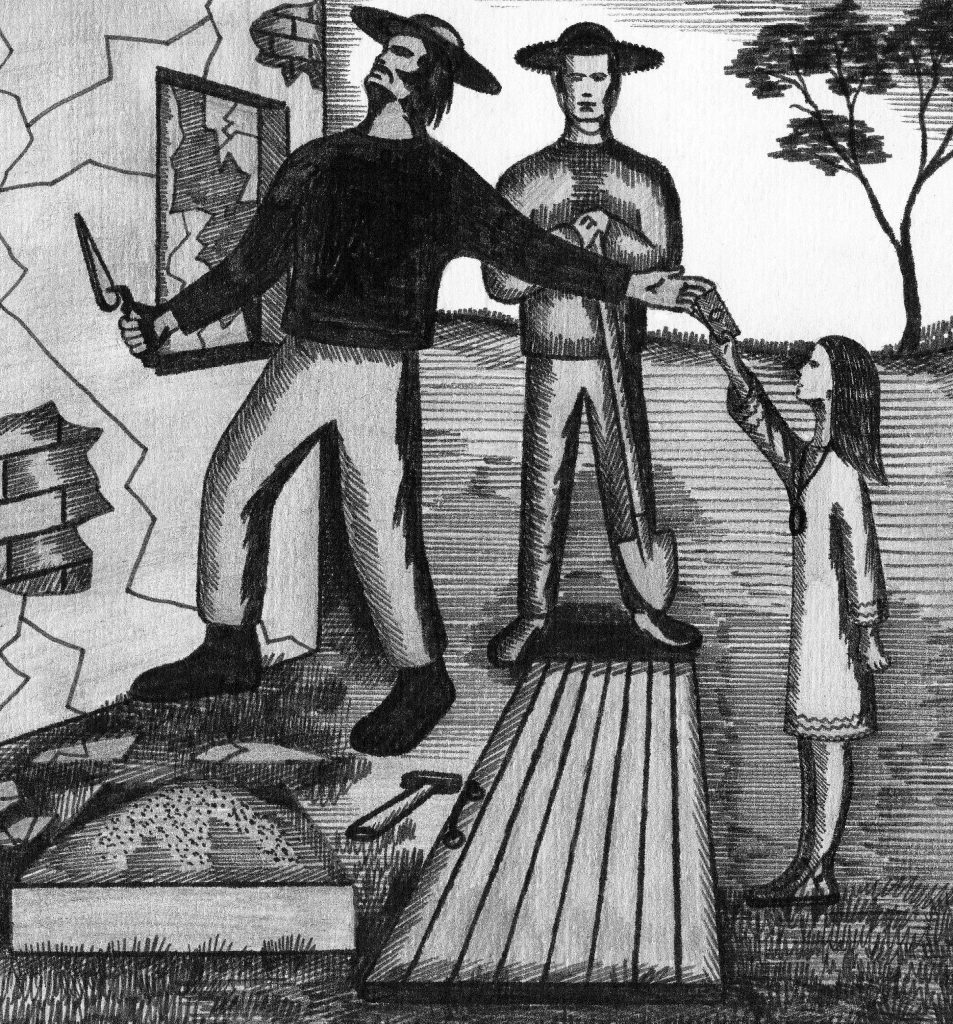 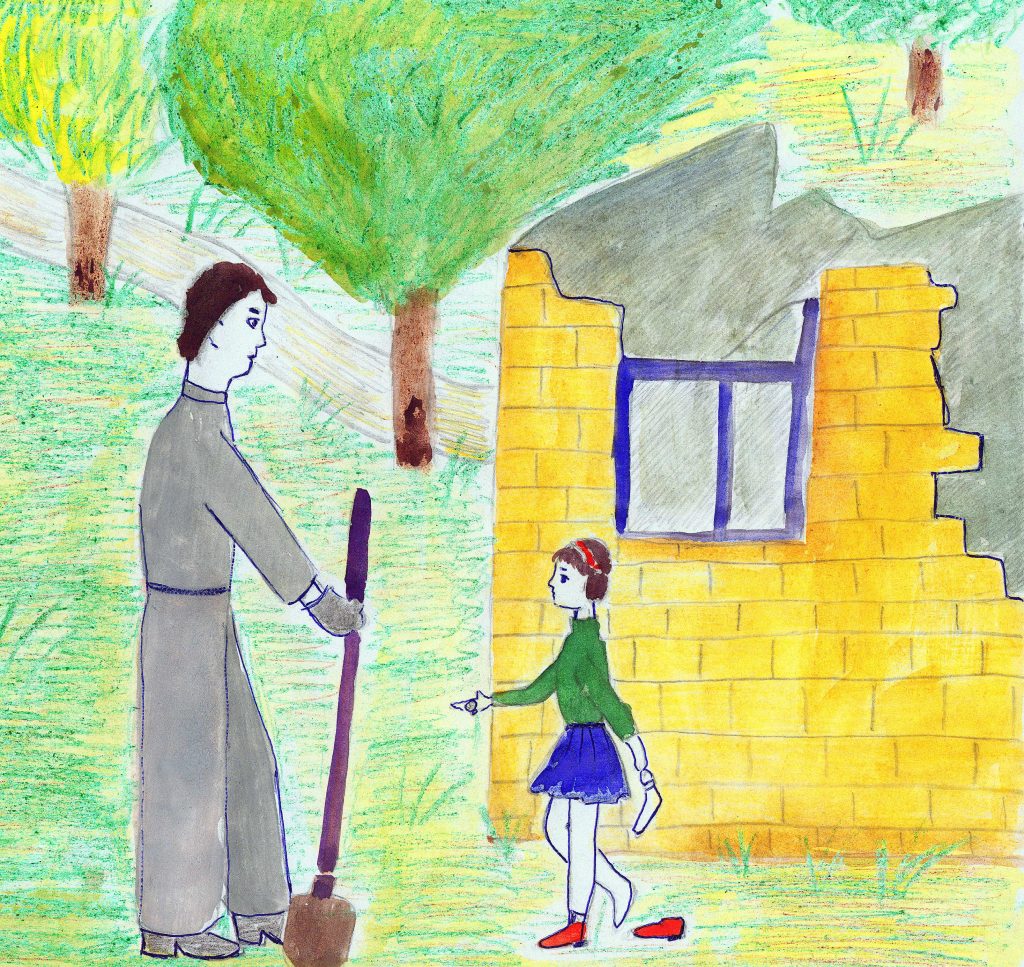 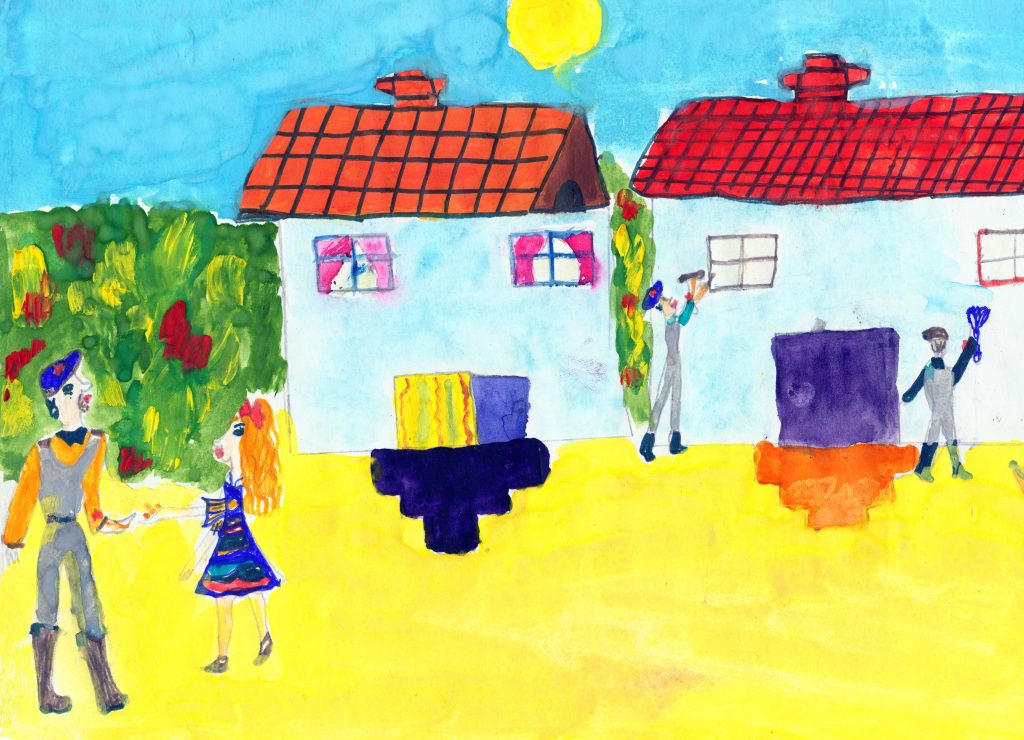 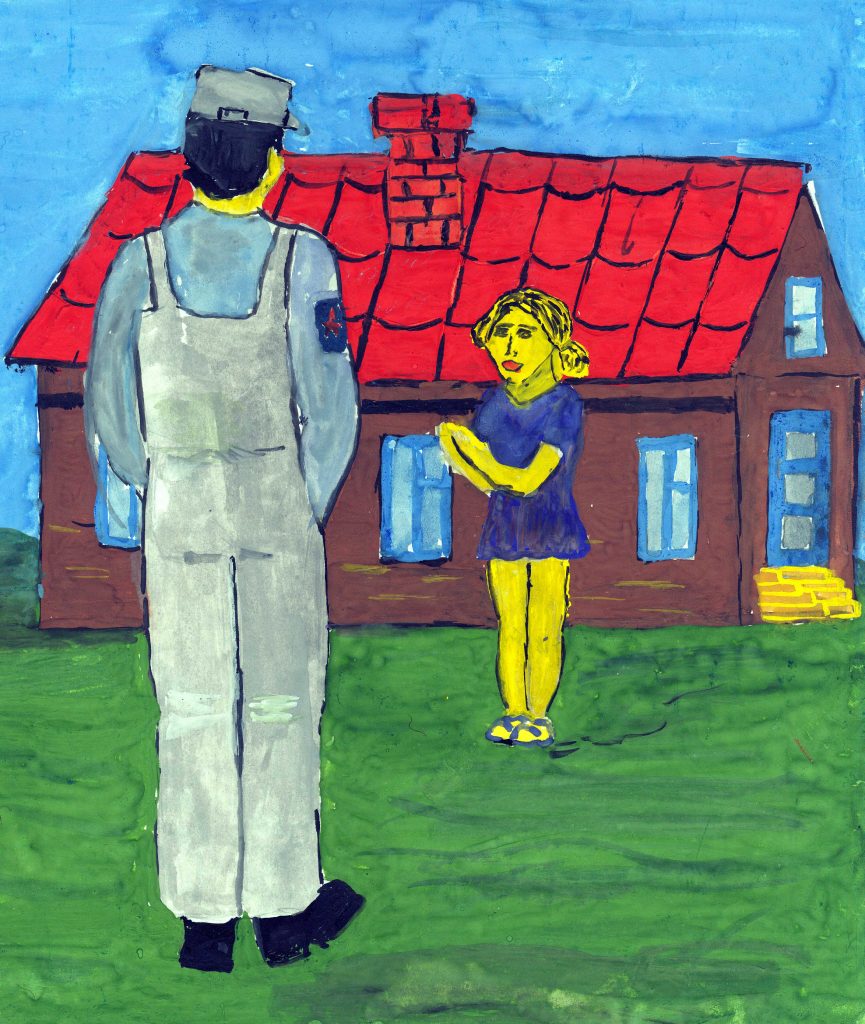 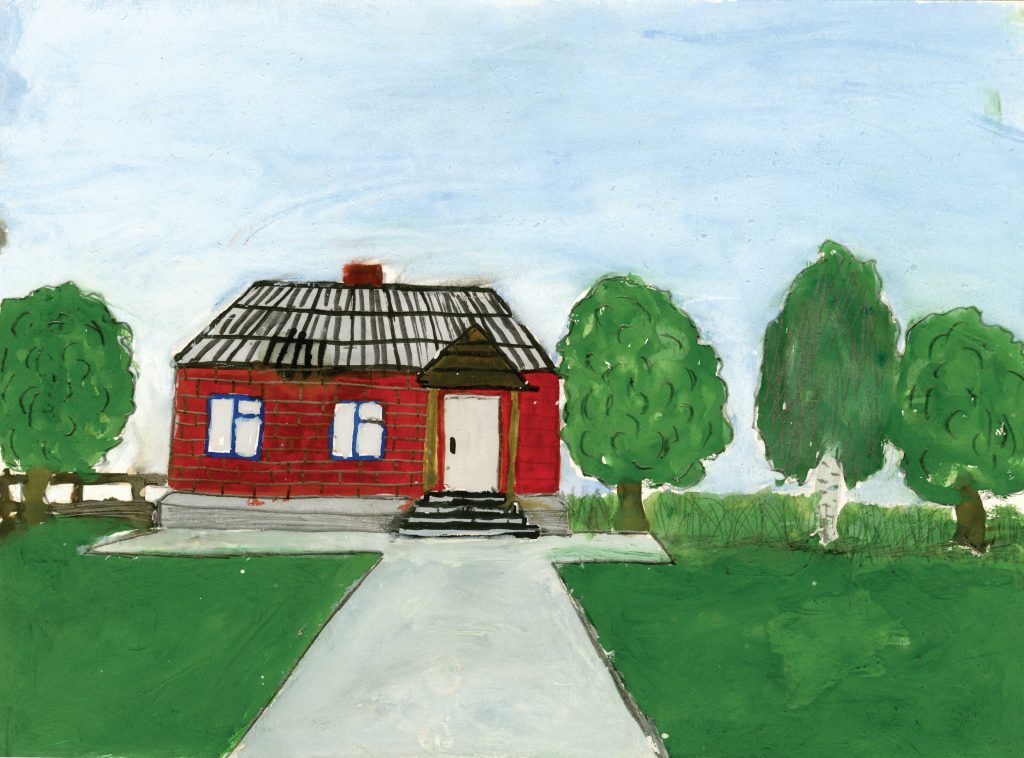 Alhazur Karimov framed: pencil and watercolor
This story is set after World War I, where a whole village had been destroyed by the fighting.

Marie woke with a start to inky blackness and the familiar smell of dirt. Her small body shivered from the damp cold. She roused herself to rearrange her rough bed of rags and burlap on the dirt floor. The nightmare that had jolted her from sleep closed around her head like a dark cloud. She had been having that nightmare every night.

It always started with a pleasant dream. She saw her beloved little French village. She could feel herself walking out of her old, cozy home with Maman and Grandmere and passing through the narrow street. Bright flowers were waving from boxes under nearly every window. The sun gleamed on the tall church steeple.

But there was another, frightening gleam creeping toward their village. It was the gleam of guns. Marie shivered again as the happy dream turned to the dreaded nightmare. Black memories rolled through her head. Terrified, Maman and Grandmere had pulled her into a clump of trees. There, the three of them had flattened themselves against the leafy ground. Blue uniformed soldiers passed in waves. Guns! Fighting! Explosions and screams! Fire! When it was over, the village was not there any more.

When the battle moved on, Marie and her mother and grandmother tearfully sorted through the rubble that had been their home. The little family moved into an old fruit cellar. “Like gophers in a hole in the ground,” Marie thought sadly.

She burrowed into her rags and fell back into a fitful sleep. The soldiers marched on and on through her head. After the French soldiers in blue uniforms, the German soldiers in green ones had come. To everyone’s relief, they soon left. Then had come the khaki uniforms of the Americans. The Americans had laughed and handed out French pennies to eager children. But when they left, the village was still in ruins.

When Marie woke again, sunlight was shining through the cracks between the old boards placed across the top of the fruit cellar as a roof. Hearing new sounds, she sat up quickly. This morning something different was happening. She wondered what the sounds could be. “Maman, have the soldiers come back?” she asked anxiously.

“No, my dear. Go up and see who has arrived,” Maman looked strangely pleased.

Marie threw off the ragged covers and climbed the rickety fruit-cellar steps. She saw immediately that new men in gray uniforms had come to the village. On their sleeves and on their caps, they wore a red and black star.

“Oh, Maman!” cried Marie excitedly after watching them for several minutes. “The star soldiers carry saws and hammers, not guns. They are building houses!” Marie thought they were soldiers because they wore uniforms. But they were not soldiers. They were workers from the British and American Quakers.

Marie thought quickly. She ran back down the old steps and grabbed an old sock. In it were six French pennies the American soldiers had given her. It was the only money that anyone in the family had. As she hurried back up, anxious hope trembled in every step. She ran over to the leader of the men in gray. Timidly, the small girl held out her tiny sock and showed the man her six pennies. “M’sieu, pouvez-vous me construire une maison pour six sous?” (Sir, can you build me a house for six cents?)

The man looked surprised and asked her to repeat her question. When he finally understood, he didn’t laugh or even smile but replied quite seriously, “Well, Mademoiselle, we’ll see what we can do.”

He didn’t say yes, but he didn’t say no either. Marie set up a daily watch to see what would happen. One by one, small houses were finished for other people. Each house was small and simple, but to Marie, they looked beautiful. How she longed for clean wooden floors to sweep and a beautiful red tile roof to keep out the rain.

Would they leave before they built a house for her family? While she waited and watched, the fruit cellar seemed darker and damper than ever. Just when she was beginning to give up hope, Marie received her answer. The answer was, “Yes!” Marie’s house, like the others, was built in just three days. To Marie, it looked like the most beautiful house in the world.

On the day it was finished, the leader of the men in gray offered the front door key to Marie with great ceremony, saying “Mademoiselle, le clef.” (Miss, the key.)

Marie took it and started to open the door officially, while her mother and grandmother and all the rest of the village looked on. But suddenly she stopped, remembering something. She had offered them her six pennies for a house, so it wasn’t really hers yet. Quickly, she ran down the old steps into the cellar and when she came up again, she walked up to the leader of the men in gray. Now that the house was finished, it looked big and the six pennies looked too small, but it was all she had. She counted them into the leader’s hand, “Un, deux, trois, quatre, cinq, six.” (One, two, three, four, five, six.) With a huge smile, Marie went inside with her family. Love and gratitude filled their hearts and their new home.