Skip to content
Transforming Community for Social Change (TCSC): Shades of Pain and Shame in Kenya 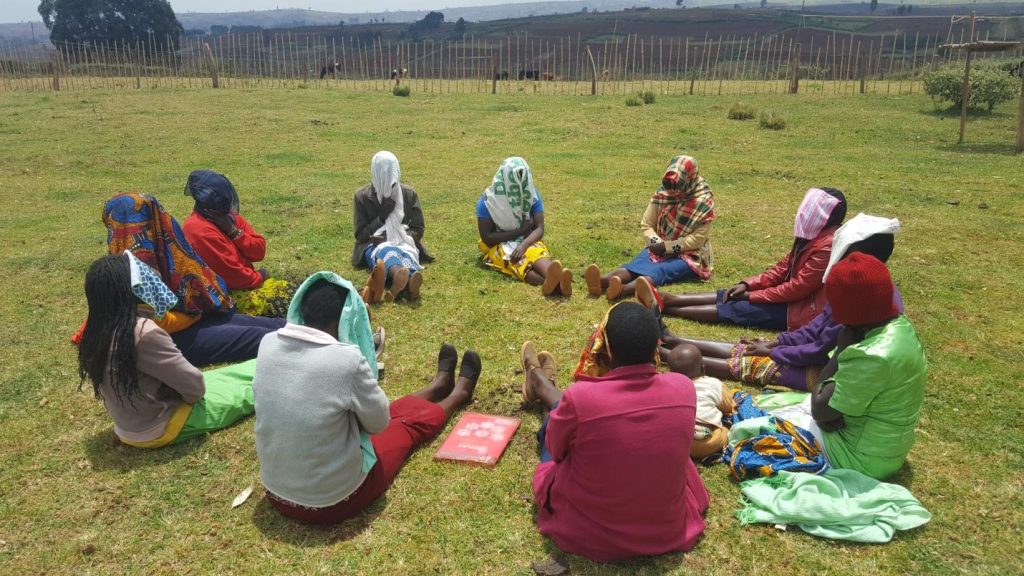 Women cover their faces in solidarity with 49 women who participated in the Trauma Healing Training, picture by Peter Serete

Due to the sensitivity of this report and the confidentiality, we are not going to use real names and other pictures of our participants in the just concluded 3 basic Healing and Rebuilding our Community (HROC) training because most of the participants are rape victims and some of their children have been abused.

Transforming Community for Social Change (TCSC) with support from African Great Lakes Initiative (AGLI) has been on the forefront in Intervening in the midst of erupted violence and unrest in parts of Mt Elgon. With continued support from AGLI, we managed to identify and mobilize all rape survives whom were taken through counseling and medication for their abused children. From the meetings, we managed to do three basic workshops, with a total of 60 women between the ages of 21 to 37 years. During the training, the rape survivor and mothers of the abused girls only 11 women accepted us to take their picture on condition they cover their faces for the fear of perpetrators, husbands and family members. The wounds of this experience were so deep. These kinds of traumatic events shatter the world as we know it, leaving these women disordered, disempowered, and feeling disconnected from other people and from life. Most of the women expressed anger, anxiety, depression, fear and asking questions like why us? Where was God and what’s the meaning of life anyway?

“My 12-year-old daughter and other girls her age have been going to the forest to fetch firewood, especially on the weekends. They are always in a small group of five to six girls of the same age. One evening, my daughter came back home without fired and she was crying. When I asked her what was wrong, she said “Blacky” slept on top of her and forcefully penetrated her. I didn’t know where to report this and again I feared exposing my daughter. I took her to Kopsiro dispensary and never shared what happened with anyone because in 2007 I was also raped when I had gone to look for building material for our house in the same forest.  I never shared what I went through because my husband would have killed me or even divorced me. How I wish I had shared what happened to me because maybe my daughter would not have been a victim today. I thank this organization for this training. Yes, I am ashamed to share my story but today I feel supported.”

“Am a window, my husband died in Jail, it was not easy to raise the five kids he left me with, I had this man who was very supportive to me, I never knew he was defiling my 13year old daughter for two years, he use to threaten her that he will kill her if she report and sometimes he could give her 10 shillings $o.1 to keep quite. One day I came back from a funeral and found him with my daughter, the man attacked me; the man pushed me on the floor and left the house. I have never seen him again. What saddened me was that as a mother I never discovered for two years this man had turned my daughter into a wife and innocently my daughter was helpless, am so sorry, my child was trapped in an abusive environment with this animal. From this training in must help her find away to preserve a sense of trust in people who are untrustworthy, safety in a situation that is unsafe.”

“The pain and shame that I carry as a woman wounds me deeply. This training has helped me. I join other women to come to terms with what we went through, unmasking my face of shame and creating a new life, don’t leave us”

As an organization, we will need to do more sensitization meetings with all community stakeholders. We will push for witness protection and proper channels for reporting to government security personnel and human right actors because most women fear reporting their cases. We will also work towards the creation of safe rescue centers for the victims and continued psychosocial support to the victims. Our Mt. Elgon Center has played a role but it does not currently have enough facility to give support to the victims.