By Elizabeth Yeats, Set in the U.S.A. 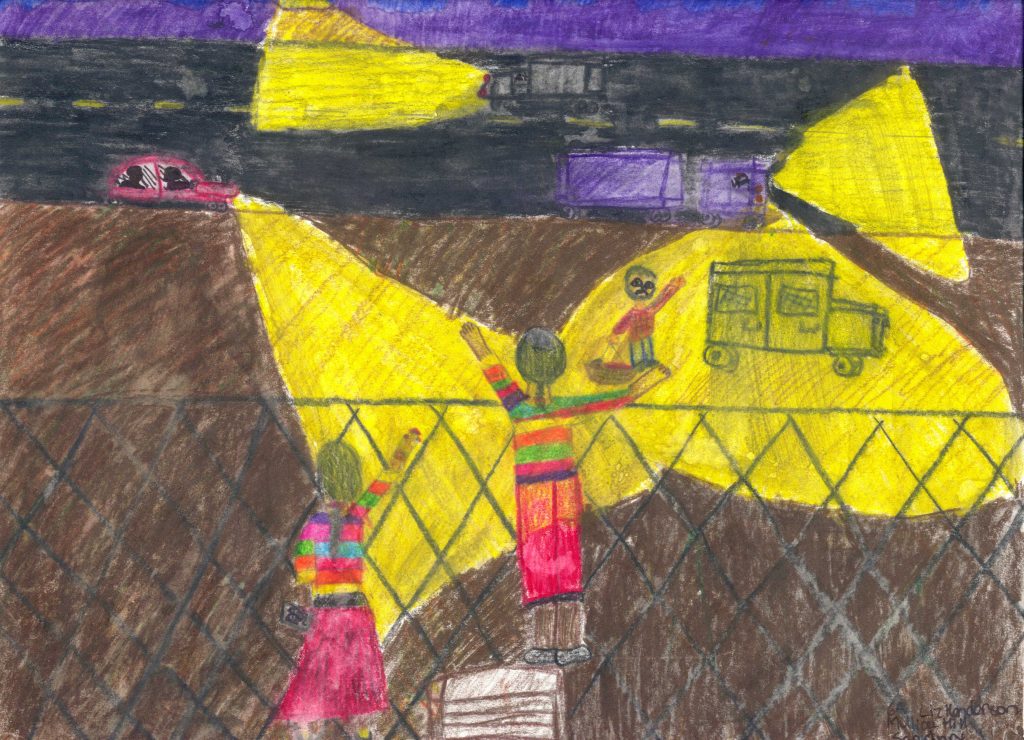 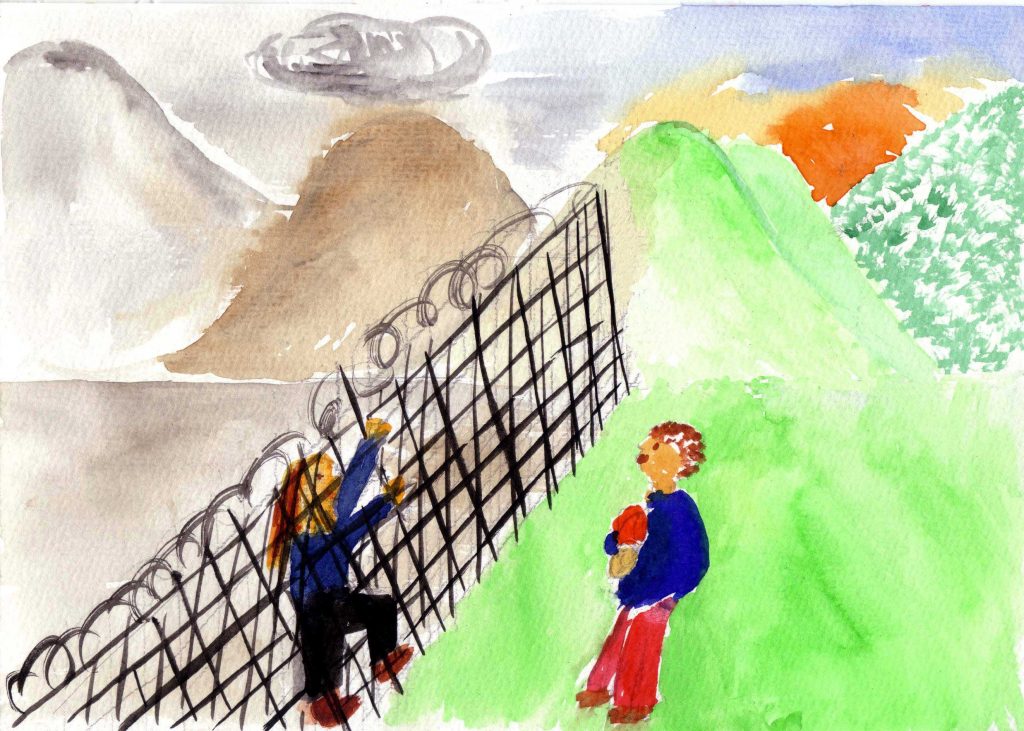 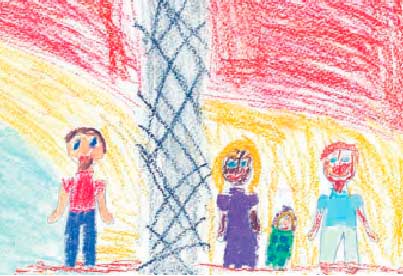 Names and locations were changed to protect those involved.

The call came late one night. “Would your group be able to give sanctuary to two young couples and their month-old babies fleeing from violence in Guatemala? You must decide quickly.” He paused a moment, then went on, “One of the babies is stranded with her parents in Mexico. We’re worried she isn’t getting enough to eat and may be starving. We need someone to travel to the border to help them cross.”

As I put down the phone, I remembered our Quaker meeting being concerned for years about the terrible violence in Central America. We heard daily reports of hundreds and thousands of people fleeing from the fighting and from arrest and torture by their own governments. Where else could these men, women and children go?

We went to sleep each night in warm, comfortable beds and woke up feeling safe each morning. We thought about sharing our security with others. Many meetings, churches and synagogues in the United States and Canada were giving sanctuary to Central American refugees. This involved breaking national laws and required a lot of help from a lot of people.

We held a special worship where people spoke. “We might break our government’s law, but we would be following God’s law to help people in trouble,” one friend said. “There aren’t many of us and we aren’t rich, but isn’t God calling on us to share what we have?” asked another. One older woman reasoned, “If God means us to accept this challenge, the way will open. I think we should go ahead.” We chose to become a Sanctuary.

So when the call came that night, we were decided. But I wondered if we were really ready and able to provide care for six people. Who would go to the border to help them cross? Now that real human beings needed our help, would the way really open? My husband, John, and I talked long into the night.

In the morning, we gathered the Sanctuary group to share the news. The group asked John, who speaks fluent Spanish and had worked with refugees before, to go. He flew west, thousands of miles, to the border. I waited at home for the call that all were safe.

The danger for a U.S. citizen helping someone cross the border illegally was arrest, trial and possible fine or imprisonment. John knew if this happened, his family and the Quakers would be there for him.

We all knew the danger for the refugees was far greater. If caught, they would be detained and most likely sent back to Guatemala. Carlos had been arrested four times for speaking out against the government at his night school. The last time he narrowly escaped being killed. If he was sent back, Carlos would most likely be killed. Where would that leave his young wife, Maria, and their baby Anna?

John finally called, his voice full of joy and excitement. All were safely across. The two baby cousins, a boy and a girl, were happily being passed back and forth. “I’ll tell you more when I get home,” he said.

It was quite a story. Life on the Mexican side of the border was difficult and dangerous. As a Guatemalan, Carlos could not look for work. They were living with Mexicans who were part of the Sanctuary Movement. After Anna was born, she and her mother were too weak to travel. Food was scarce, so Maria wasn’t producing enough breast milk. They traveled away from the border to look for food and shelter. Finally, they were strong enough to try to cross again.

When John arrived, he rented a jeep and drove winding roads to the lonely meeting place. He waited tensely on his side of the fence for hours, aware that with each passing minute it got darker and more dangerous to drive back to town. The family walked miles in the growing darkness.

First to be passed over the fence was the baby Anna. She began to scream. She grabbed John’s beard and pulled hard. John had all he could do to keep from screaming himself. Maria crossed next. Carlos and the other family crossed at different places, as this was safer. John bundled the tired mother and child into the jeep and drove cautiously back to town. He could only see the lights of other cars. Border police could be in any of them and he wouldn’t know it until they pulled him over. Then what would he say?

Though frightened himself, John tried to talk to Maria. She remained silent, huddled in the corner with her sleeping baby in her arms. Imagine how frightened she must have been driving through the dark in a new country, with a bearded man she did not know. But the trip went without incident. Maria and Anna were delivered safely into Carlos’ arms. Only then did Maria relax and give John a shy smile. By the time John returned home, the way had opened for all six refugees to come into our Sanctuary. Friends prepared space for them, scheduled helpers around the clock for just after their arrival and practiced Spanish.

The families began their long trip across the United States, driving many miles each night, staying with different Sanctuary families. Each family would call ahead to the next family and say, “The Lone Ranger is here.” Then, they would gather clothes and food, fuel up cars and get ready to drive the refugees to the next place. Thus they travelled on a modern underground railroad not very different from the one used by those escaping slavery in the U.S. over a hundred years ago.

Finally it was our chance to provide transport for the refugees to their new home. On a fine April morning, John and I woke at five in the morning to set out over the mountains in a borrowed van. We arrived at the safe house just as everyone was having breakfast. Before turning around to drive home, we sat on the back porch, drank coffee and passed around those beautiful babies.

As I write this, Anna is four years old. She has a beautiful baby brother named David. Her family has brought so much joy to our community! They have cared for our children, taught us how to cook Guatemalan food and shared their music and poetry at our celebrations. We have held vigils, prayer services and other events to help community members and citizens in our state understand the situation in Central America. We have had times of fear and difficulty, misunderstanding and hurt feelings. But over and over, we work and listen and struggle with each other, and finally, the way opens, and we take the next step in our experiment of caring for each other in the Sanctuary.

The U.S. Congress passed a law to protect refugees from being sent back, but it didn’t always work. It only protected them for two years and didn’t include Guatemalans. Most refugees and people who helped them were in danger for decades. People of different faiths were arrested for their work in the Sanctuary Movement, but we continued to protect people entering our country and advocate for recognition of their full rights as human beings.