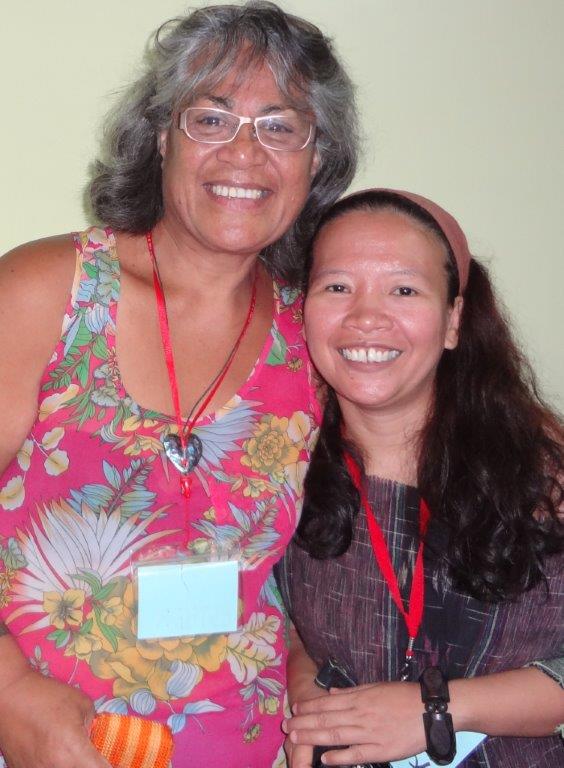 I was called to service in the Philippines to lead a team of AVP facilitators. The experience was a wonderful opportunity to meet other F/friends and to witness the power of love and transformation among Boholano and Manila Friends. Unfortunately time did not permit me to extend my stay to visit other parts of the Philippines. Perhaps another time!

This report will highlight three particular areas of interest of my visit: 1) connecting with fellow Quakers; 2) the AVP workshops; and 3) the visit to the peace school and the people involved.

Prior to the Philippines I had two weeks in Indonesia with Nadine and the 2014 Indonesia Peace team.

My first stop was Manila where Marjorie and Ludwig were at the airport to meet me. They had flown in from Bohol earlier and stayed on to wait for my flight. Ludwig and I had been in regular communication via email during the planning stages of my trip so it was very nice to at last put the face to the name. I was delighted to meet him and as my trip progressed, our relationship as AVP colleagues and Friends deepened to one of mutual respect and collegiality through our faith and work in the AVP workshops. Marj and I were able to renew our connection as Friends as, to my great delight, I discovered we were together at the World conference in Kenya. As time went on, our relationship also deepened through being Friends and having regular contact in Bohol and later the AVP workshop.

Our stay with Charlotte Lapsansky

From Manila airport we travelled to Charlotte Lapansky’s very beautiful apartment. I had also communicated via email with Charlotte – a Friend from the USA working in Manila. As with Ludwig, it was lovely to meet Charlotte and put the face to the name. On the evening of my arrival, Charlotte took us to her favourite vegetarian restaurant where we had the most delicious vegetarian food. This was the start of many vegetarian meals for me and happy to say the food I enjoyed there influenced my decision to become a vegetarian. Even though Charlotte had to leave the next morning for Bali she was so welcoming and made our two nights stay in her home very comfortable. I can’t thank Charlotte enough for her wonderful hospitality and kindness to me when I landed in Manila and then when I returned to fly to New Zealand. Heartfelt thanks, Charlotte!

When I returned to Manila from Bohol after the AVP workshops, Charlotte and I attended a Manila Friends meeting for worship. There were 5 of us at the meeting and we discovered after introducing ourselves that besides being Friends we also had one other common feature and that was that we all had PhDs and were at some point in our lives academics. The diversity of our group in terms of ethnic background was also noted – 1 of Scottish descent, 2 Filipino, 1 Samoan /New Zealander, 1 African-American.  Following our meeting, we shared a delicious lunch to which everyone had contributed.

Whilst in Manila, Ludwig, Marjorie and I visited a Peace school – the Golden Link College in one of the poorest parts of Manila called Camarin, Caloocan City. We were met by Vicente Hao Chin, Jr., President of the school and Rekha Nahar, the school’s administrator.  The school was set up by the Theosophical Society in the Philippines as a manifestation of selfless service in line with their principles of peace and equality.  The students ranged in age from 3-25 and the classes went from early childhood through to College.  What impressed me about the school was that there was no graffiti or obvious displays of bullying. What I observed was a relationship of respect between staff and students.

All the children were served one vegetarian meal a day, which we got to sample ourselves when we joined the staff for lunch.

All around the school on the notice boards were positive reinforcing messages of peace and achievement, illustrated by quotes and sayings from respected historical and current renowned Leaders and visionaries.  The whole atmosphere of the school was a living example of how to live and work together in peace. Summer school classes were on during our visit so we were asked if we would say something to the students’ English proficiency class. I spoke for a few minutes on New Zealand.  I left feeling extremely inspired by what I observed.  I was very pleased that I had further contact with some of the staff at the opening of their preschool in Bohol later on in my visit.

I had taken an earlier flight than Ludwig and Marj, and when I arrived was pleasantly surprised to be met by another fellow Quaker—Ludwig’s dad, Boni.  Marj, unfortunately had to go to work but Ludwig joined us for breakfast when their flight landed soon after mine.  Once settled in to my accommodation, we met with our team and proceeded to organise our dates to meet and plan the AVP workshops.  The AVP team for the workshops was comprised of Kind Kins (Alma Aparece), Lively Ludwig (Ludwig Bon Quirog), Brave Boni (Bonifacio Quirog, Jr), Caring Cecile (Maria Cecilia Arigo), Marvellous Melanie (Melanie Ticong), and Romantic Ricky (Ricardo Lacea) and myself (Exciting Esther) as Lead Facilitator.

AVP Workshops – the people, the context, the outcomes

The workshops were amazing! I was truly excited and totally in awe of the participants. They were fully participatory, extremely funny, creative and talented. The role-plays were a brilliant piece of entertainment and learning. 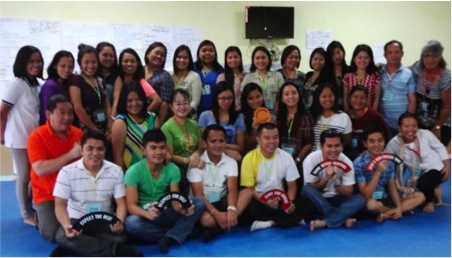 The first workshop had participants from the faculty and staff roster of the UB High School and the Victoriano D. Tirol Advanced Learning Centre, both subsidiary institutions under the University of Bohol, where Kind Kins, one of our facilitators, is the Dean of Planning.  They were all workers of the academe and had been used to very conventional educational methods – very different, as they discovered, to AVP methods.

Since the workshop was sponsored, in part, by the university, the participants were selected by the administration from a roster list.  It was done this way so the limited slots would be best utilised.  Those that were selected to attend were informed of the opportunity, which was regarded as one of the enhancement training programmes they were encouraged to attend during summer vacation. Many were glad to be there while some were obviously sceptical about why they were selected.

There were 24 participants, 19 females and 5 males, with a broad age range.  There were teachers as young as 21 years and an older participant aged 55 years.  We were confident, though, that the age gap would not be a hindrance since they were all colleagues and worked in the same field. This added to their comfort of being together and their ability to express their feelings openly and honestly.

In terms of participant responses to the workshop from their evaluations, they gave an overall score of 1.09. This was very affirming of the facilitators, especially those who graduated from the Training for Facilitator’s workshop in October 2013, because this was their first time in an AVP workshop facilitator role. For the majority, the highlights were the Transforming Power session and the principles of the Mandala.  “I Messages” and “3 wishes” were noted by a few and many commented that The Transforming Power Mandala served as a catalyst for personal change in them and that it has helped them become less violent people. The materials were highly commended for being eye-opening and practical and for one participant the physical materials were environmentally-friendly. There was nothing deemed ‘unhelpful’ or ‘least helpful’ and the facilitation of the workshop received very positive responses.

We completed the first workshop and then went straight into the second workshop the following day. It was exciting and rejuvenating but also quite taxing because of the ‘back to back’ timing of the workshops.  Nevertheless, the team approached it with zest and zeal! We were fortunate we didn’t have to reinvent the wheel totally as we were able to utilise a considerable amount used in the first workshop for the second. We simply made changes that were relevant and appropriate for the much younger participants aged from 11-15 and those who were predominantly in the 18-20 year age group. Altogether we had a total of 18 graduates – 15 females and 3 males which included an older group aged 36-40years.

The score for the overall workshop was overwhelmingly high (1) as well as for content (1) for process 1.11 and facilitation 1.16. Over 50 percent of the participants thought the Mandala Transforming Power talk was the highlight of the workshop. Others mentioned “I messages’, concentric circles, light and livelies.  A few of the participants commented that everything was a highlight. Most of the participants said they were changed most inside by the principles of ‘Transforming power’ stating it helped them improve how they saw themselves and how they go about their daily lives. They also said the workshop had improved their self-awareness and sensitivity to the needs of others. The majority of participants said nothing was unhelpful, but two mentioned lack of time was a hindrance, and one said the agenda preview was least helpful, and one that the role-play was ‘boring’.

There was a general sense that the participants wanted the workshop to be longer, over several days in a live in camping style. I would surmise that their understanding of having the workshop in two levels and training for facilitators may have not been fully understood hence the request for more days.  Being young people also, a more social amenity has an appeal for them. Perhaps they may not be as ‘busy’ as older more mature participants as well