Skip to content
Peace Activists Have Been Protesting Korea’s Navy Base in Jeju for 12 Years!

Peace Activists Have Been Protesting Korea’s Navy Base in Jeju for 12 Years! 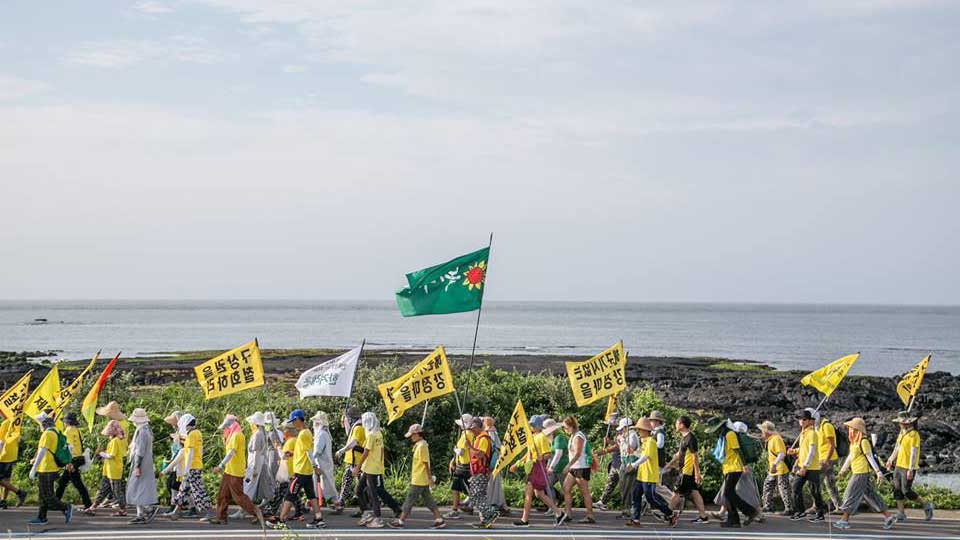 The Peace and Life March it is held every summer for one week to walk around Jeju Island, Korea, to call for the demilitarized of our Island.

Gangjeong Village’s activists call us to engage in local-to-global movements for nonviolence, sustainability, and democracy. Let’s learn from them and support their work.

The Association of Bereaved Families of Victims announced that they will send 100,000 signatures to the US embassy in Seoul to demand the U.S. take responsibility for their part in the April 3, 1948 massacre of civilians on Jeju Island, Korea.

Earlier this year, March 2019, protesters from Gangjeong Village and their allies stood in opposition to the arrival of U.S. Coast Guard cutter Bertholf, which pulled into port just as Jeju’s people were memorializing the horrific April 3 Uprising and Massacre of 1948.

The Jeju April 3rd Peace Park commemorates the Jeju April 3 Incident. Thousands of islanders were killed by government forces implementing a “scorched earth strategy”. National Police opened fire on civilians in Jeju on March 1, 1947 and again on April 3, 1948, when members from the Jeju branch of the South Korean Labor Party called for Korean sovereignty and freedom from Japan or U.S. control after WWII. On September 21, 1954, the last of the displaced people finally returned to their homes. 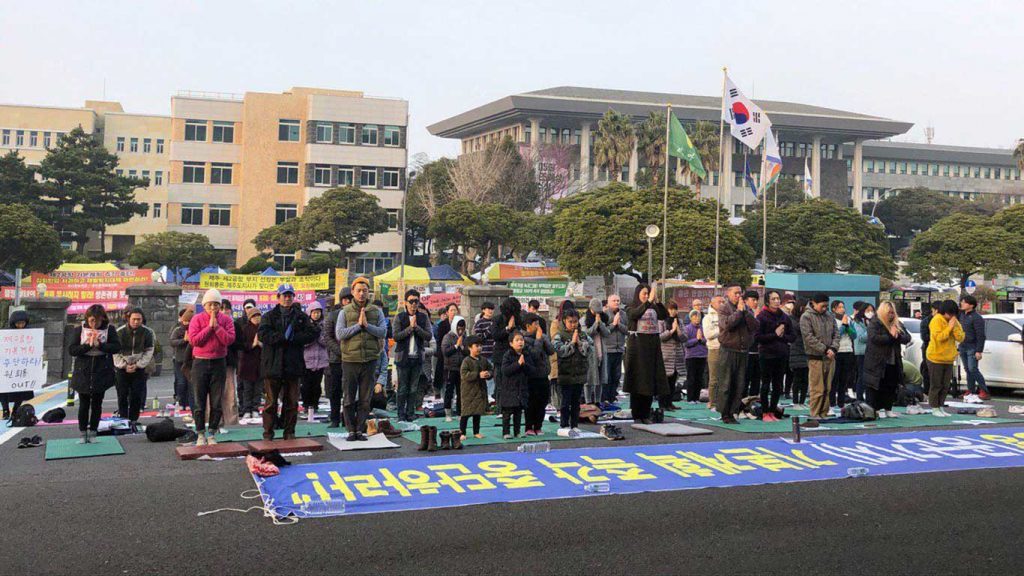 With this massacre in mind, contemporary activists in Gangjeong Village addressed this massacre with sea- and land-based protests as the U.S. cutter Bertholf arrived and berthed in March. To promote a more peaceful world, the activists demanded that the United States apologize for the Jeju massacre in 1948 and they told the U.S. Coast Guard to get out of Jeju. Now again, on October 24, they will send 100,000 signatures demanding recognition and responsible action.

Since 2007, peace workers in Gangjeong Village have called on everyone to support their daily protests against the building and expansion of the Jeju Civilian-Military Complex Port. Friends Peace Teams Asia West Pacific supports the work carried out by Jeju’s pro-peace, pro-ecology, and anti-military protesters. These resilient peacemakers show us that there are many ways to make a better world, and that we all have a part to play.

When the Korean government proposed the military base in 1993, Gangjeong Village residents began objecting to the government’s plans. The peace advocates expressed opposition to the Navy base because its presence would destroy daily life for residents on Jeju Island. Gureombi Rock was a unique, exquisite lava formation, 1.2 kilometers long and 200-300 meters wide. Photographs do it no justice, only direct experience connected us to the immense natural, spiritual power of this unique ecology and rock formation. It was the spiritual home of Jeju culture dependent on the physically-demanding, traditionally-skilled work of women divers. The Korean military then poured concrete over this ecological wonder. A decorative portion of the Gureombi Rock is locked inside the Base. But this spiritual, cultural center of Jeju was destroyed–a tragic attack on ecology, culture and women. 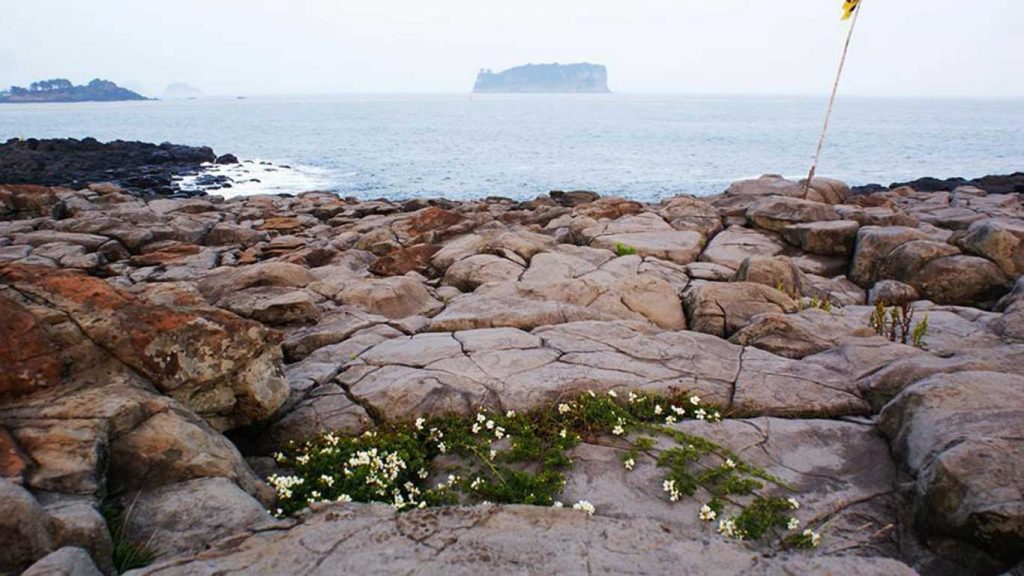 The Gureombi Rock before the military buried it in concrete, 1993.

It became clear that the construction and operation of the base: 1) threatened the environment and contaminated the Island’s entire ecology; 2) provided a foothold for the United States to oppose China and to confront the government in the northern half of Korea; 3) uprooted local social and economic relations by placing the base at the center of work and commercial relations, and 4) located girls and women, boys and men within the violent realm of male-dominated, racist, sexist and imperialistic militaries. In addition, the Navy base was designed to house guided missiles equipped with U.S.-made technology, a very dangerous situation for residents.

As a result, protesters objected to the Navy base, which included plans to berth 20 military ships and cruise ships with tourists. Even though residents expressed their grave concerns, the government refused to hold a democratic discussion. Rather than establishing an open decision-making process about whether the base should be built, the state shoved the construction project forward. The government held a sham vote on the project, where over 90 percent of the eligible voters had no chance to even participate, much less to vote “no.”

Gangjeong’s peace activists began carrying out daily protests in 2007. These protests continue to this day. So far, activists have protested for over 4,500 consequent days, voicing their democratic and peaceful opposition to the Navy base and related developments. In the first five years alone, protests stopped the construction of the military base at least seven times. Jeju’s peace work continues unabated, partly because peace activists from around the world have stood with Gangjeong Village.

Simultaneously, during this memorial time in March 2019, Jeju environmentalists led protests against the building of a second airport. The construction of this airport would bring the cutting of age-old forests and the contamination of Chunmi-cheon stream, which has provided drinking water to residents of eastern Jeju Island.