When the Tunas Baru Preschool in Barak Induk was established, being able to understand and be a companion for children represented the hopes and ideals. This is part of the struggle process of some people who realize that education is very important, especially for their children born and raised amidst the struggle of being displaced by war and trying to get recognition of their rights as Indonesian citizens in this new place.

In 2010, the residents of Barak Induk, which currently have 475 families, received recognition of their population in the form of the issuance of Identity cards after waiting 10 years. Until now, they also had to struggle to gain recognition of their land rights and settlements. 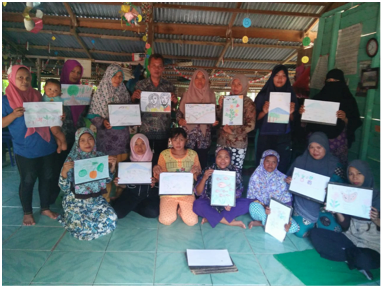 Mislan, Syahrida, Sri, Legiani, Legiatik, Dita and Suci Suherni are seven people who did not have formal education background. Now, they have all graduated with Early Childhood Education degrees because of scholarships from Friends Peace Teams. Due to these scholarships, they were able to survive and assist children and parents to look for a more peaceful future. The government has now shut down preschools without formally trained teachers.  Tunas Baru was allowed to stay open because of the scholarships for their degrees.

The spirit of the seven people is inseparable from the loyalty of Nadine Hoover who has supported them since 2006. The AVP Workshop, Trauma Healing workshops, and the knowledge of child development are part of the skills that were shared with them to get out of their trauma and adversity. Ultimately, it brought out their ability to rely on the power of change guided by conscience. They are aware of the great change they experienced as a community.

They drew, sang, played, moved and pressed paper to experience their child’s activities and understand their value and how to support their children’s skill development. This training took two hours. The hope was how to train skills and bring empathy to parents to be able to feel what the child feels.