Greed-based Economy is Built on Sorrow and False Hope 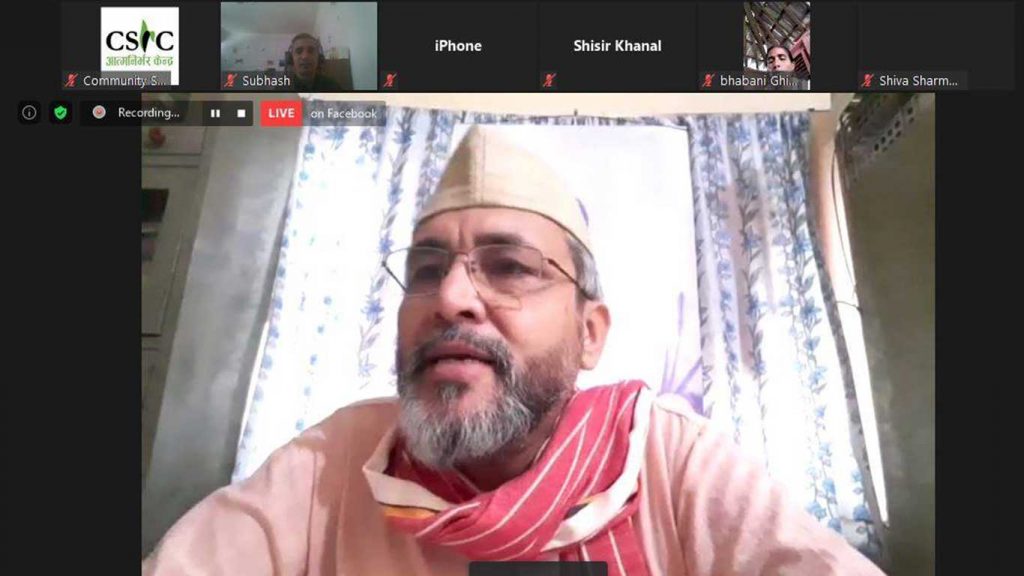 FPT-AWP friends in Nepal from CSRC and NLRF organized the first ever public virtual discourse on ‘Nonviolent Economy’ in Nepal on the occasion of International Day of Nonviolence on 2nd October. FPT-AWP Country Coordinator Subhash co-coordinated and moderated the discourse. This series recounts some of the important aspects of that discourse.

Nepal is a country of villages, which are now home to only about one third of the population. Factories draw cheap workers, and exploitation is normalized and unpunished. The modern education system denigrates and stigmatizes agricultural work. Most of the educated new generation felt ashamed to say their parents are farmers. Only a few choose agriculture as a profession, while most pursued office jobs lauded as most promising, but with false hope. This greed-based economy drives villagers from their village homes to become a new kind of slave in a violent economic system. This economy is based on breaking human relationships with Mother Earth and each other in the name of democracy, development, and employment.

Once the lockdown began to control the pandemic, villagers who had come to the city in search of work lost their jobs and could not afford to live in the cities. Neither the government nor the economic system cared about their plight. Long marches of reverse migration took people back to their villages from the cities. Hundreds of thousands of people lost not only their connection with the cities and governments, but also their access and control over the natural resources back home in the villages. Historically, who did the land and forests belong to? The villagers. Who did the rivers and waters belong to? The villagers. And, today, who do these resources belong to? A mafia of urban rich people veiled in corporate interests.

Villages have become increasingly dependent on industrial production and supply for almost everything– food, clothes, medicine, seeds, fertilizer, processed junk food, health, education, alcohol, and beverages. Traditional, local systems of production and supply have been lost or are not functioning properly. So, there is a high possibility of unimagined levels of hunger, crime, and economic and political chaos in the coming days.

This shows that the current economic system is incapable of taking care of the weak and poor. It is built on false hopes at the expense of the people’s plight and sorrow. This tragedy is created by advertising that tricks us into believing that we need to consume more, and if we are good workers we will get what we need and have a fulfilling life. But this system does not respect or value labor. Issues and concerns of the poorest people are not given space, consideration, or importance in the mainstream national discourse. The rich think of the poor as vote banks, not human beings.

This greed-based system’s main (but hidden) objective is to capture as much of the natural and human resources into the hands of a few people in a few corporations to make as much as profit as possible at the expense of Mother Earth and their fellow humans. Who is forced away from access and control? Farmers, landless, and laborers. We cannot imagine an equitable society out of this system, because without equal and respectful participation and shared ownership, equity is not possible.

Therefore, we need to question- democracy and economy for whom? Development and employment for whom? And at what expense? Is our talk about freedom limited to papers and talks? Where is the freedom of a worker in a factory? Do we understand how many hours farmers work in the field? Where is their freedom and dignified life? Many of us wish to change this violent economy to a nonviolent one. To do so, we only need to look to the plight of farmers, landless, and laborers to know whether the economy is violent or nonviolent.