Skip to content
Militarization of COVID and Military Opportunism

Militarization of COVID and Military Opportunism 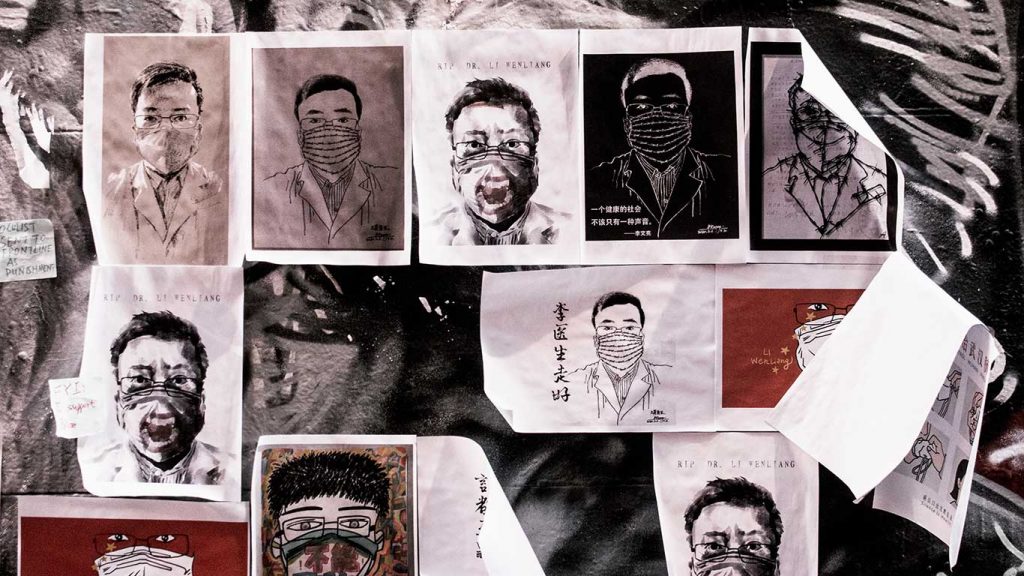 Rest in Peace Posters of Dr Li Wenliang, who warned authorities about the corona virus outbreak seen at Hosier Lane in Melbourne, Australia. Dr Li Wenliang became the ‘face’ of speech suppression in China. Photo by Adli Wahid on Unsplash

Authoritarian governments impose unquestioned control over resources, decisions, and power. They are very aware that emergency situations offer tremendous opportunities to expand their interests. The global COVID-19 pandemic offered such opportunities. Many governments have militarized their responses in subtle and invasive ways. Not only low-income countries but high-income countries have spent huge amounts of taxpayers’ funds on war, military contracts, and profiteering instead of investing in adequate healthcare systems. A few weeks ago, we shared a story titled ‘Resist Militarization of COVID-19 Responses’.

Whether we are in easy or hard times, we think our societies and systems should function based on conscience, discernment, and democratic values and processes. We should not militarize civic, public, or governmental roles. We do not want societies run by fiat, control, secrecy, deception, and violence, like military or armed groups. We have seen the results of this in North Korea, Myanmar, Afghanistan, Iraq, and many other countries. Since the media often fails to do so, as citizens we must share our stories with friends who care for peace and justice through nonviolent means. Friends Peace Teams’ AWP Country Coordinators continuously observe the situation in our respective societies, and will give you an overview from seven countries.

The Russian government imposed a 7-day-per-week 24-hour curfew. Chechens were allowed to leave their homes for two hours once or twice a week, if they received a special government warrant. But it was unpredictable who would get the permit or how often. Anyone found outdoors without a warrant was arrested. Then suddenly, during the referendum, Russia lifted the curfew including in Chechnya.

Indonesian’s National Disaster Management Agency (BNPB) has been headed by military personnel since its founding in 2008. So in response to a disaster, the military takes primary control. Before 2008, the Community Capacity Building Board (Babinas) ran disaster relief, not the Military Regional Command (KORAMIL). Previously President Abdurrahman Wahid, fondly called Gus Dur, wanted to disband KORAMIL, but was opposed by the military. When Gus Dur was deposed, KORAMIL was still functioning. The current government structure is highly militarized in all aspects of society. So of course the military strongly controls the COVID response, not the Ministry of Public Health or local government. The government adopted a policy to refocus the budget for COVID-19. Civil society called for oversight of the use of budget, but a law lecturer at the University of Gajah Mada in Jogjakarta was arrested for holding a discussion criticizing the president’s management of the pandemic response.

As Melanie Siaw reported earlier, on 18 March 2020 the new Perikatan Nasional government composed of the old guard, Barisan Nasional, and other Malay-based parties enforced a movement control order (MCO). Millions were forced into self-quarantine in homes to reduce the spread of coronavirus. Five days later, the Malaysian Armed Forces (MAF) was roped in to assist the Royal Malaysia Police (RMP) in enforcing the MCO. It is debatable whether the government has acted in accordance with the Constitution when the MAF was deployed during this pandemic, but it sets the tone of investment in military rather than public health investments and interests.

Nepal’s army has become the main and leading institution to respond to the pandemic. They plan, coordinate, and execute the tracing, quarantine, and import of health equipment and medicines, mainly from China. Recently a spokesperson from the Health Ministry was replaced because the military did not like the previous one. The military’s spending on quarantine is huge and they have refused to be questioned or audited, not only by civil institutions, but by the government itself. An army general wrote on their official website- ‘localized responses to the virus at the tactical level in the military sense that are disconnected from the grand strategic elements cause gaps that undermine a nation’s ability to respond effectively.’ The very civic and public capacities we need to keep us safe and healthy are weakened and eroded by military institutions who take over and expand their control in the name of the pandemic.

When COVID happened, a special law was passed to give authority to the state to facilitate easy access to funds and clamp down on people writing ‘fake news’. In March, Philippine’s President Duterte arrested prominent journalist Maria Ressa. In April, he warned civilians who violated the pandemic curfew could be shot by police. Then in early May he shut down the country’s largest broadcasting network, a blow to press freedom and the flow of information in the middle of a pandemic. On June 16, 2020, the Japan Times reported on the     “ ‘Shocking judicial masquerade’: Philippine journalists’ case highlights global decline of press freedoms…. It’s given a perfect framework for the repression of reporting.” Allegedly 30,000 arrests and 900 murders have taken place during the lockdown. Now, the Anti-Terror Bill was passed as a priority bill, and the termination of the Visiting Forces Agreement between the Philippines and the US was put on hold. The military runs the integrated task force for COVID. The message running for weeks is that the Filipinos are so ‘hard headed’ and undisciplined that the answer to the pandemic is increased law and order, not healthcare. If people won’t be contained, they will be disciplined harshly.

The government uses military language when talking about the pandemic. The Prime Minister said he was in the “fight for his life”, almost “took one for the team”, he survived because he was “strong and determined.” The British government refers to key healthcare workers as “frontline workers.” People were told this was the biggest national challenge since the war, suggesting that people respond with a war-time attitude and spirit. Distribution of PPE to hospitals and COVID-19 testing stations around the country are run by military personnel. The track and trace app will be the most extensive mass surveillance tool and operation ever launched in the UK. People will be expected to share unprecedented amounts of personal information. Many, understandably, are uncomfortable about signing up to such pervasive surveillance measures. Government says that it is everybody’s civic duty to do so.

No one in pandemic preparedness imagined that the US would have a failure of testing. But failures to test and treat revealed the massive divestment in public health. Military language permeates the news–frontline workers, a battle against the virus. The military received huge funding allocations to put up emergency hospitals that were for the most part not used at all, again diverting funds away from public health. Over-reaction and under-reaction have been used for political polarization or fear rather than educating people on how the virus transmits and how to stay safe. The militarization of our thinking, response, and media coverage obscures the subject of real investment in public health and public good.

We know militaries around the world have garnered massive contracts and investments, further depleting investments in public health and the common good. Since we monitor human rights, we also know that the worst offenses occur when travel is restricted and no one is looking. It may be decades before we discover the real cost of the global-wide travel restrictions and stay-in-home orders.