Skip to content
Land Rights Movement and AWP in Nepal 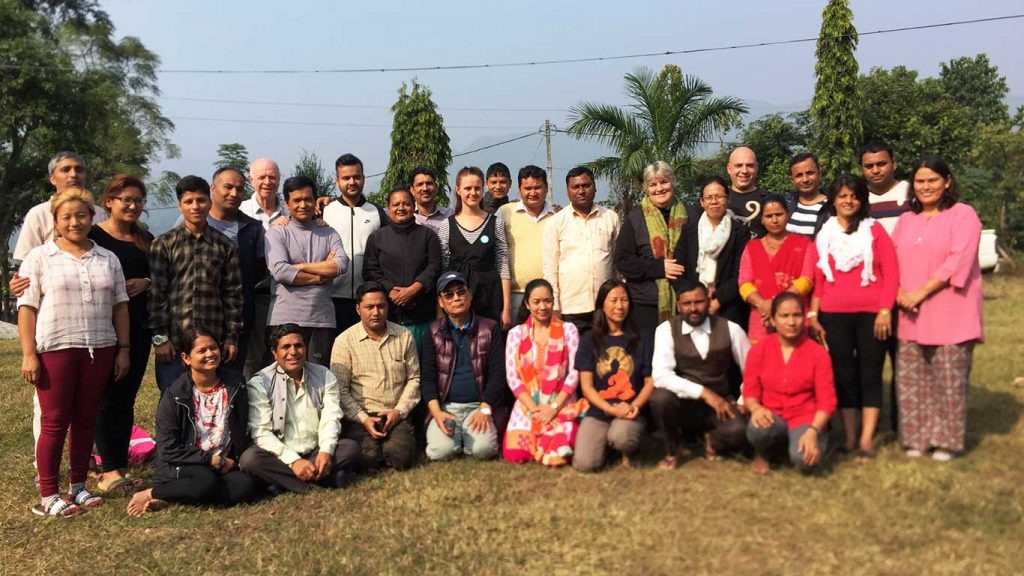 The first ever Creating Cultures of Peace training group in Nepal, November 2018, photo by CSRC

More than a million people in Nepal have been awaiting land-related justice for generations. Many claims to land ownership due to bonded labour, squatting rights, unmanaged settlements, forced evictions, displacements, or temple/monastery trust land transfers go unrecognized. Unsettled claims are most extensive among the lowest strata of the society, who suffer from social, economic, political, and educational disadvantages. In a society that accepts poverty, exploitation, oppression and gender discrimination, the poor suffer further from denial of their rights, access, and ownership of land.

Two organizations lead the largest nonviolent social movement for land reform and land rights in Nepal: Community Self Reliance Center (CSRC) established in 1993, and National Land Rights Forum (NLRF) established in 2004. CSRC facilitates and supports the movement, does research and knowledge development, resource generation, leadership development, lobbying, and advocacy. NLRF is a self-organized movement of landless and land-poor people of about a hundred thousand members. This people’s organization carries out a grassroots nonviolent social movements for justice and rights across the country.

Subhash joined the movement around 2007 and continues until today, because he believes justice is necessary for lasting peace. It is the natural role of a peace and justice worker to stand with poor and disadvantaged people who need societal support and solidarity to achieve the justice they truly deserve. Subhash uses the advantages he has gained from being from the so-called high caste to empower those with less advantages, who mostly come from the so-called lower caste. To achieve peace, we must end privilege that legally or structurally protects the advantages of some to the disadvantage of others, and use the advantages of our development for the betterment of everyone. 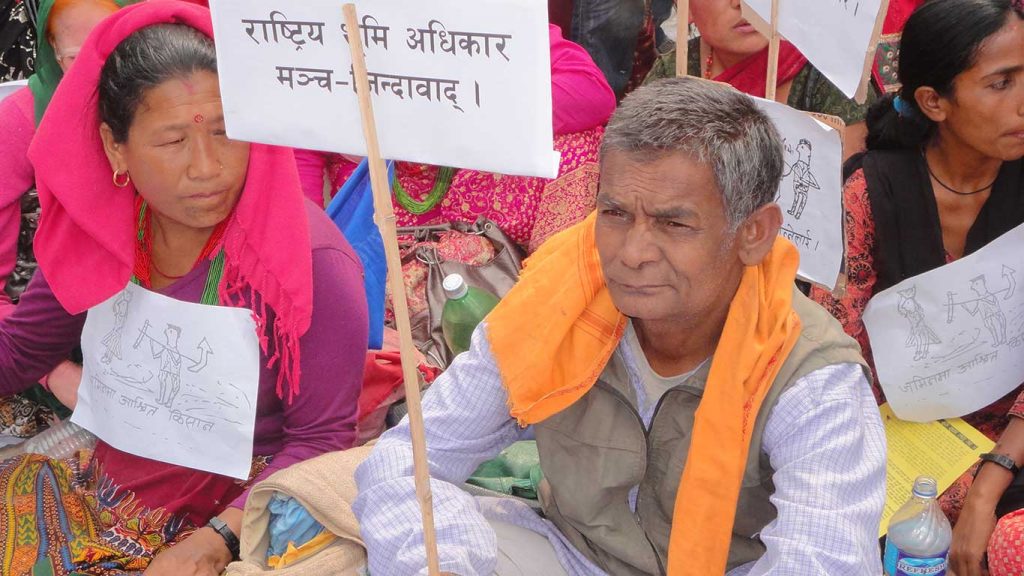 Soon after the devastating earthquake of 2015 in Nepal, FPT-AWP received unexpectedly large sums of relief donations to share with the victims. Subhash helped to channel those resources to those most in need in the remote areas through CSRC and NLRF’s network. Friends Peace Teams’ relationship with the Nepali land rights movement began with this effort. During this time, Subhash, Kalpana, and others from CSRC and NLRF, joined Nadine, Vidya, and others from FPT-AWP to organize this relief effort based on timely, mutual discernment. The CSRC and NLRF leadership appreciated how quickly and effectively we were able to make decisions and act.

The relationship continued to grow. Land rights activists attended the AVP Creating Cultures of Peace (CCP) training at Peace Place in Indonesia: Nari Ram Lohar from NLRF in 2018, Kalpana Karki from CSRC in 2019, and Kumar Thapa from CSRC in 2020. Nari Ram and Kalpana deeply felt that their organizations and movements really needed a training like CCP. In 2017, Nadine and Kins shortly visited CSRC in Kathmandu and NLRF in Sindhupalchowk, and introduced a taste of CCP to the larger group. After some consultation and preparation, CSRC and NLRF hosted the first-ever CCP training in Nepal in November 2018, mainly for the core leaderships of CSRC and NLRF. Nadine was invited to lead the facilitation team. Just before the training, Friends Peace Teams installed a much needed water filter at the NLRF central office in Timura, Nepal.

To sustain and institutionalize the experience and practice of creating cultures of peace, CSRC decided to organize regular monthly practice sessions in their organization for all available activists. Subhash and Kalpana continue to coordinate and facilitate these practice sessions. CSRC in Kathmandu organized a training session for their own teenage children, and NLRF in Rasuwa district organized another CCP workshop for district level activists. CSRC and NLRF adopted the practice of these tools such as stopping and core self on a regular basis in their gatherings, meetings, and reviews. Kalpana from CSRC and Subhash with two other CCPers have been regularly practicing companion groups to support each other in their practice of peace in private and public life. 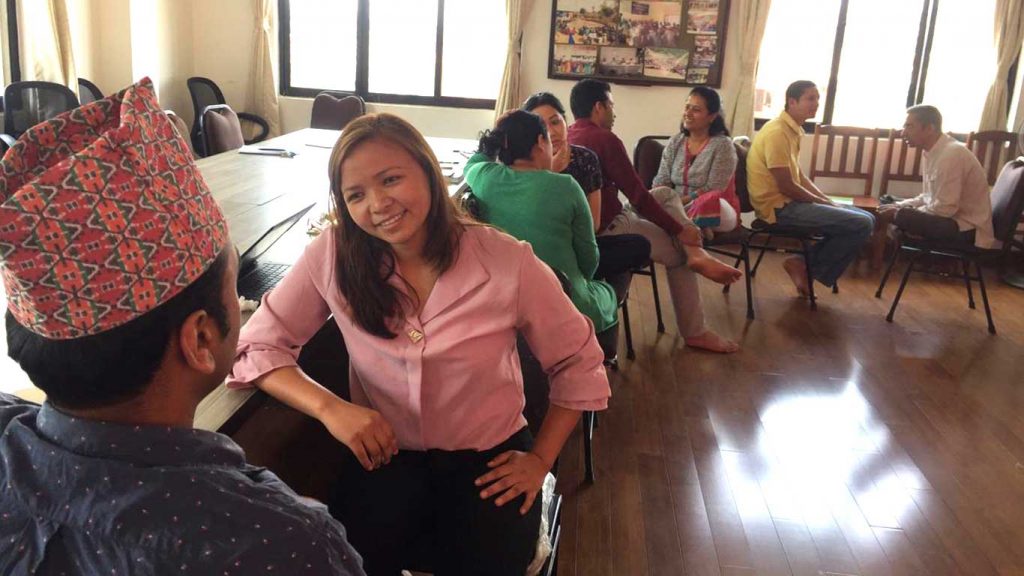 Sabitri (second from left) and others practicing affirmation in pairs exercise in a practice session at CSRC June 2019, Photo by Subhash

In Friends Peace Teams’ relationship with the land rights movement in Nepal, we:

The hope is to continue to nurture and strengthen our friendship and relationship with CSRC, NLRF, and the land rights movement in Nepal. NLRF is trying to figure out steps to integrate and institutionalize CCP into their organization. This process has been delayed because of a combination of the pandemic and their developmental limitations. A series of leadership development training, including CCP, are planned for the second layer of activists at CSRC and NLRF across the country. Those trained will then share their experiences and tools with other communities through leadership development training. The CCP Nepal team hopes to organize and host national (and probably international too!) CCP training in coming days, and CSRC and NLRF are happy and willing to participate in hosting. CSRC has expressed its commitment to support the translation of Creating Cultures of Peace by Nadine Hoover into Nepali and Subhash has started the task. A very good team of facilitators is gradually developing within the CSRC and NLRF. We hope to continue to grow.

Subhash regularly shares news and stories about CSRC and NLRF through Friends Peace Teams and hopes to continue to do so.

To AWP Working Group members, donors, and supporters, Subhash would greatly appreciate your questions, comments, or feedback about AVP-CCP, CSRC, NLRF, the land rights movement, or the AWP Working Group’s relationship, involvement, or participation in Nepal at subhash.peace.nepal@gmail.com.