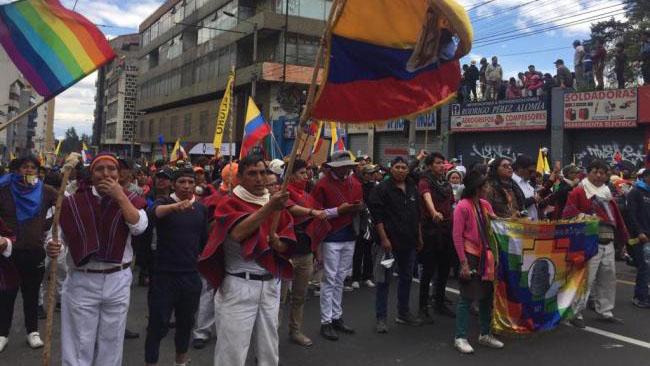 In October, widespread strikes against the government’s recent agreement with the International Monetary Fund (IMF) paralyzed the country for ten days, with previously unforeseen police repression and martial law.  So much tear gas was fired against protestors that the supply ran out, as the US Embassy tried to secure more from Colombia.   Police also utilized rubber bullets which they aimed directly at the face and head, causing loss of eyes and in one case, death.  The overall death toll of protestors was seven, with hundreds more injured and over one thousand arrested.  Youth and indigenous people mobilized in mass, taking to the streets around the country and arriving into Quito from distant rural areas of the Andes and the Amazon.

Given the indigenous leadership through this delicate political crossroads, work with our partners is more important than ever.  Kichwa women leaders of Jambi Mascari of the Central Committee of Women of the Union of Indigenous Communities of Cotacachi (UNORCAC), are preparing to take the AVP Facilitator Training in early 2020.  They will then adapt the workshops for Kichwa-speaking women in outlying rural areas.