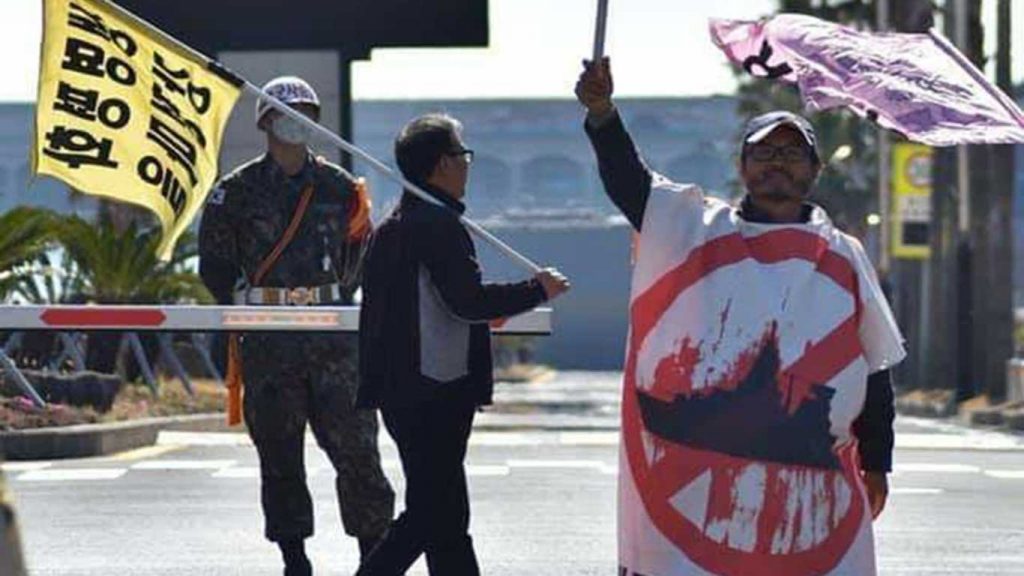 Dear friends of Friends Peace Team in the world,

This is Jungjoo working in Jeju Island of Korea and I need your help TODAY.

I will print and deliver them to: Jaeyoung Lee, Korea Peace Institute, Namyangju City, Kyunggi Province, South Korea to deliver on January 23.

I would like to make a request to you for my dear friend, great mentor and passionate coworker, Brother Song. Some of you may have already heard about him. If not, please read the description below. If you have time or interest, please write a one paragraph letter to appeal.

January 27 is his second trial so we hope to see a better result with the appeal letters.
His attorney told us having written letter appeals from his friends may be more supportive this time. You have already supported him in many ways and I really appreciate your support and attention. Deadline is by 23 January 2021. Please see below to get a glimpse of what you are supposed to write.

1. Song Kang-ho has been working for peace in international conflict and disaster affected areas like Afghanistan, Pakistan, Rwanda, Aceh, Timor-Leste (East Timor) and Haiti since 2000. Recently, he has been opposing the competition between imperial powers to dominate international waters in the South China Sea from Gangjeong on Jeju Island, South Korea, and tirelessly promoting solidarity for demilitarization and peace between islands of different countries fighting militarization like Okinawa and Taiwan. This is the fifth time he has been imprisoned in the struggle against the Jeju naval base.

2. Imprisonment & Trial
Song Kang-ho remains imprisoned with his appeal trial underway after being sentenced for two years for cutting through the barbed wire fence of the Jeju naval base and entering the base to pray for peace on what remains of Gureombi Rock where the original waterside park once stood on 7 March 2020. The base itself was constructed illegally, in haste, and through violence on Jeju, the Island of Peace. President Roh Moo-hyun proclaimed Jeju the ‘Island of Peace’ on 27 January 2005. However, Jeju has steadily become more and more militarized. We hope you will help us create a real island of peace. In particular, to ensure that civilians can share in what is called the ‘Civilian-Military Complex Port’, Song Kang-ho has been requesting that the remaining fraction of the dynamited Gureombi Rock be opened for public access once a year on 7 March. After entering the base on the 8th anniversary of the blasting after not hearing a response to his multiple written and verbal appeals, he is now appealing the heavy sentence of two years imprisonment imposed on him.

Dr. Song Kang Ho, who founded The Frontiers, has committed his life to peace work in Korea and all over the world – from Rwanda to Afghanistan to Iraq to Rohingya refugee camps. In his work against war and structural violence, we have witnessed his commitment to nonviolent peace and justice.

We are aware that because he violated Korean laws during his protest action at the Jeju Naval Base, that he has been in jail for almost a year, and that there is one year remaining in his sentence.

We ask you to consider that Dr. Song did not cause human harm in his violation of the law, and that the message behind his action was a call for human security and sustainable peace that cannot be obtained through military competition between nations. When he is released, Dr. Song’s work of building a more peaceful society will benefit many more people around the world. Please use the power that you have been granted with wisdom and justice. 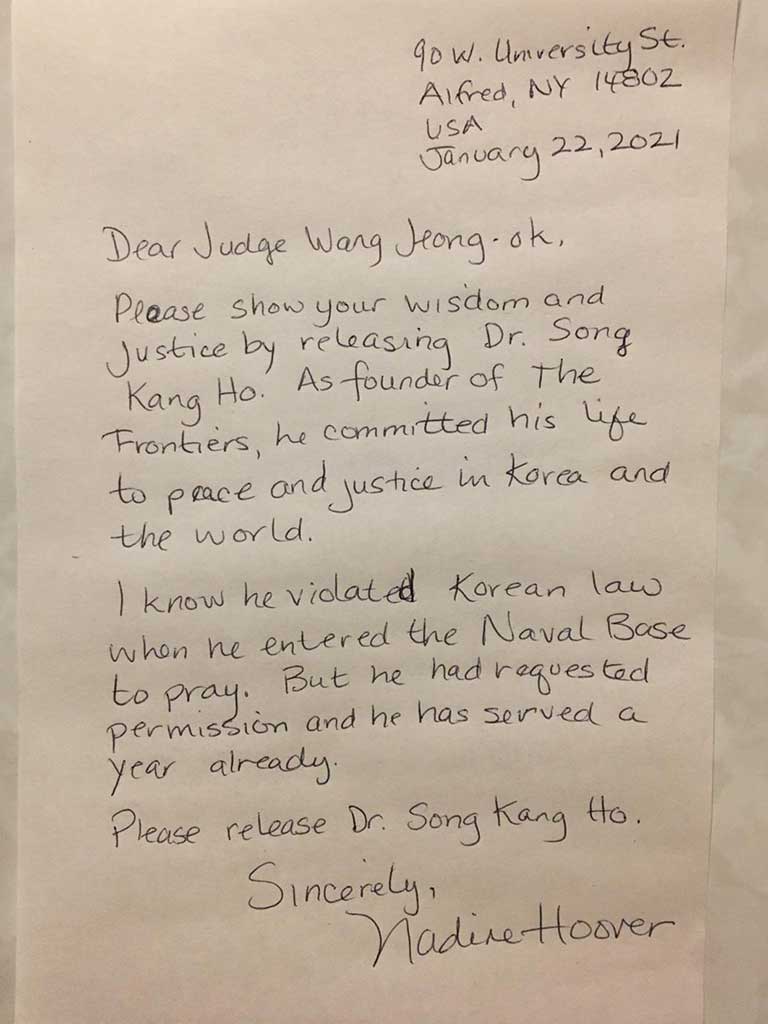