Gabriel is a member of the Friends Peace Teams Council.  A lifelong Friend, he got interested in Quaker peace work while working at the Quaker United Nations Office in New York.  Gabriel then interned with the African Great Lakes Initiative in Burundi.  He currently resides in Brooklyn, NY, where he teaches at Mary McDowell Friends School. 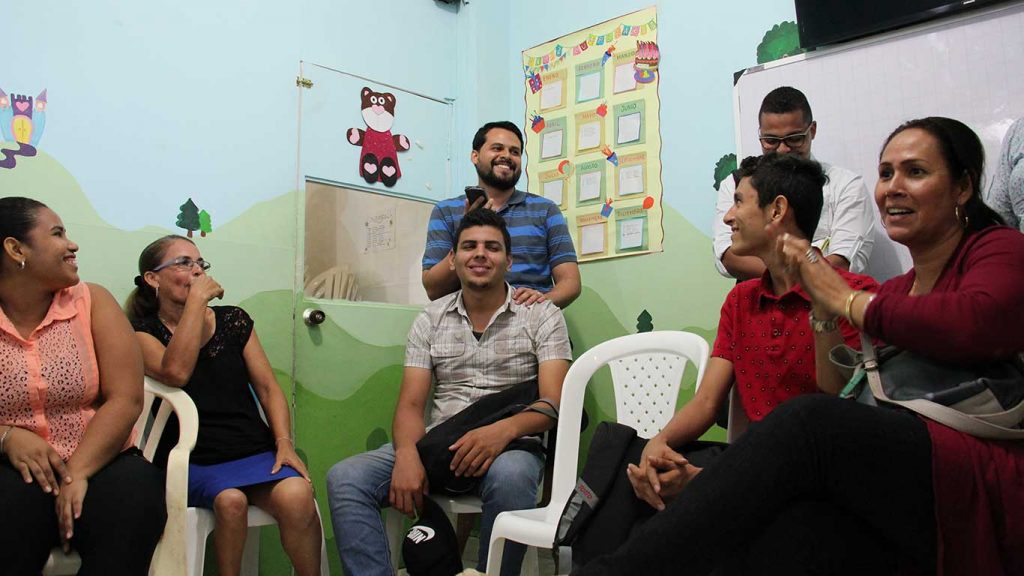 Manuel shares stories of his experience with AVP, Barranquilla, Colombia

“Transforming Power has changed my way of being. I was impulsive and wanted to change, but I wasn’t finding the way. Those who want to hurt me, I no longer judge, and I forgive them.” -Alternatives to Violence Project participant, Montería Prison, Montería, Colombia

I am writing to share my experiences during the remarkable two weeks I spent in Colombia in August 2010, during which I met and interviewed participants and facilitators of the Alternatives to Violence Project, which carries out three-day workshops in non-violence in Colombia and in scores of countries around the world. I am also writing to ask you to consider supporting the work of PLA this fall.

I knew very little about Colombia before my arrival. I had vague notions about coffee, drug trafficking, jungle, guerillas, paramilitaries, salsa, and more. I came to see how these vague notions occlude a truer picture of a country with an incredibly rich history, culture, and in the midst of a difficult struggle for peace and stability. Traveling to and learning about Colombia also took on a singular importance for me as an American, given the US’s “special relationship” with Colombia. Through Plan Colombia and other forms of aid, our tax dollars have played a major role in this country’s history, and American demand for cocaine continues to fuel the conflict.

Friends Peace Teams has been supporting workshops in Colombia since the early 2000s. Through the work of a dedicated team of facilitators, the program has flourished. Today, there are workshops and trainers in various places around the country: in Montería, Cordoba, near the Caribbean coast, in Morroa, Sucre, in Palmira Valle, in Barranquilla, and in Medellin. The AVP team gets support from Friends Peace Teams, but also other organizations such as the World Council of Churches. The list of participants is long and impressive as well. Workshops have included: displaced people, demobilized military, at-risk youth, nuns, monks, lawyers and judges, teachers, students, and many more. Friends Peace Teams representatives have also developed a methodology for trauma healing, based in part on workshops developed in the African Great Lakes. Colombian trainers also recently helped with trauma healing workshops in El Salvador.

The story of Miguel and his family illustrates the different types of violence that pervade the country. He, his wife, and his five children lived in Tierra Alta in the Cordoba Department (State). Cordoba, near the coast, is one of the most sought-after parts of the country because its soil is so fertile. Fighting between guerillas and paramilitaries is fierce there. The region saw more than 1,500 deaths in one year, and it is called the “Red Zone” for all the violence. Miguel, his wife, and five children fled to lower land, where Miguel’s wife had family.

Now, Miguel earns a living working as a motorcycle-taxi driver, which earns him only a few dollars a day. But instead of fearing fighting between guerillas and paramilitaries, his family lives in the shadow of the drug smuggling organization whose airstrips begin just a little ways down the road from Miguel’s house. Miguel told stories about people disappearing, others working for the smugglers for months without getting paid. He also said that everyone in the community is inside their houses at six pm with the lights off to avoid suspicion. He had lost a brother just months earlier to the fighting that went on in his old community.

Exposed to so much violence, at so many levels, Miguel said that he too behaved violently. He said the way he behaved toward his family was not correct and that until he participated in an AVP workshop, he did not know it. Now, he says, he treats them better and they live together more harmoniously.

An AVP facilitator told a story about putting the AVP teachings into action as well. He was standing at an intersection when two cars almost crashed. The drivers stopped, got out of their cars, and started exchanging heated words. The situation escalated, and the argument began to draw a crowd. The confrontation was approaching a physical altercation or worse. At that moment, the AVP facilitator began to clap, as if the drivers were actors performing a scene. The other bystanders joined in, and gave a full round of applause. The two drivers were bewildered, and so shocked by the strange reaction of the crowd that they stopped arguing, got back in their cars, and drove off. The facilitator says that AVP gave him the strength and presence of mind to find another way of approaching the conflict. Without AVP, he wouldn’t have had the the tools or capacity to find a peaceful resolution.

Manuel, a facilitator in Montería lost his best friend to the violence. Before he came to AVP, another friend says, Manuel was lost, unable to make friends because he was so traumatized. Through AVP, he was able to begin trusting again, and to make new friends. Now, Manuel facilitates recreation programs with at-risk youth, helping them fight drug addiction, and view themselves in a positive light.

Brief vignettes tell the story of how much AVP means to people as well. Facilitators recounted spending a day at a school, talking to teachers about AVP and what it could do for their students. At the beginning, the teachers hemmed and hawed about the time, saying that they couldn’t stay past 4pm. The time to leave came and went as the facilitators went over-time, and not one had left. At another workshop, the team members expected 15 teachers. Fifty-nine showed up. At a workshop in a prison in Montería, the team told of a participant coming into the workshop stone-cold, a sneer on her face. They said that by the second day, she was crying, sharing her story because of the trust that the workshop created. They also described women coming to workshops on the first day wearing revealing clothing, slouching in their seats. On the second day of the workshop, without saying a word, the women came back dressed nicely, and sitting properly, ready to engage. The team touts these and others as examples of the demand that exists for the workshops and the power they have to change people.

Participants from workshops in a Federal prison in Montería share their perspectives on AVP:

“Just because we have ended up in this situation, doesn’t mean life is over. Life has just begun. In class you learn how valuable we are to each other and ourselves. To become better persons, to change the negativity in ourselves and convert it to positivity. This class has brought light to us, which is hope.”

“One should know how to forgive, and to forgive oneself, to drop our pride, to help and collaborate with people who need [us], love others and love oneself.”

“For a moment, [AVP] made me forget that I was shut up in here. I learned that it’s important to put humor, a lot of humor into life. If we could practice all this in our day-to-day lives, everything would be much easier.”

“Since the death of my father, I had trauma and despair…I understood that we can overcome our pain. It feels good to know that we can and should move forward.”
These are only a select few voices from the hundreds who have taken part in AVP programs in Colombia.

In Montería and in Bogotá, the enthusiasm and excitement of the facilitators was tempered only when discussion turned to financial resources. They receive requests for workshops from all corners of the country, they say, and if they had the resources, could carry out many more. Funding for workshop covers food, transportation, and sometimes facilities–three day workshops cost just a few hundred dollars, and their impact is huge.

I felt privileged to spend two weeks with such charismatic, kind, and dedicated facilitators. They undertake cutting edge peace work, all while caring for their families and careers. They welcomed me warmly, hosted me, and taught me not just about the ugliness and pain of life affected by conflict and poverty, but about the beauty, the rich culture, and the warmth of their country.

Please consider a donation to support the moving and remarkable work that AVP volunteers are carrying out in Colombia and elsewhere in Latin America.

Gabriel is a member of the Friends Peace Teams Council. A lifelong Friend, he got interested in Quaker peace work while working at the Quaker United Nations Office in New York. Gabriel then interned with the African Great Lakes Initiative in Burundi. He currently resides in Brooklyn, NY, where he teaches at Mary McDowell Friends School.