Doing “Speaking Out” with Communities 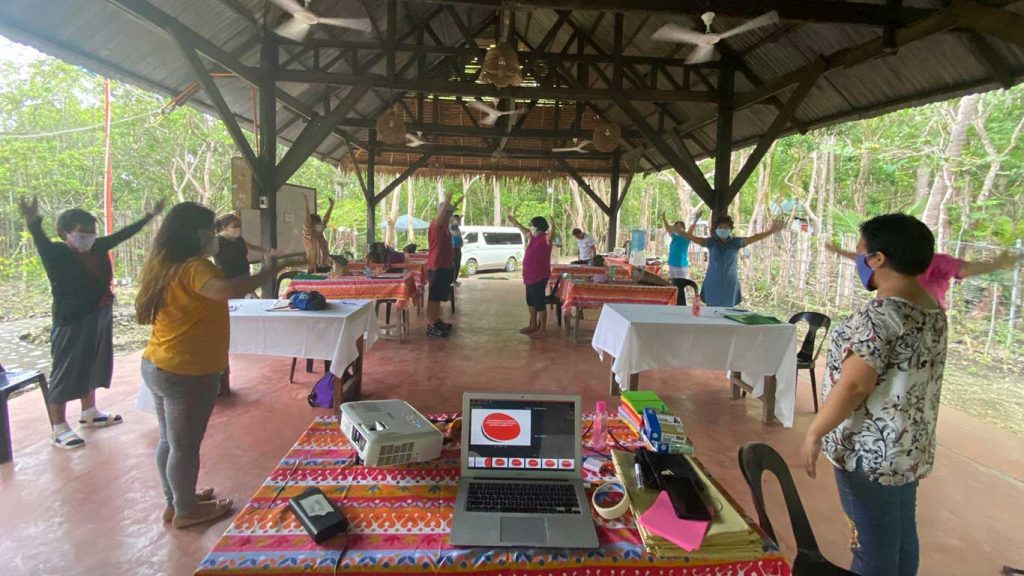 I am using the format from the Speak Out activity as a tool for communities to process their problems and seek authentic solutions.

What we [saw/heard] was_[concrete action or words]

What has to change is __[concrete action or words]__

No matter how short the time allotted, I still follow the AVP Road Map. Even if it’s brief, we get to know each other, do some sort of affirmations, get each person speaking and listening, and then working together on writing a statement. The group does not need to participate in a full Cultures of Peace workshop, but they do need clarity of mind to make a good statement.

On June 24-25, 2020, during the Reorientation on the Basic Instruments for the Protection of the Rights and Welfare of Informal Settlers and Strategic Planning Workshop, we repeatedly did the following: stopping, gathering for sharing, play (with physical distance, not touching), reflection, and closing. On Day 1, we did good listening, shared in pairs, remembered the laws affecting informal sectors, analyzed the key actors in the community, and shared our dreams.

On the morning of Day 2, we wrote the Speak Out statements. We translated the template of Speak Out into the local Cebuano language. Below are the results. The first one was a significant experience for the group since it was the first time they spoke frankly and openly about corruption within their own group, and experienced the power of doing so. To address their own internal issues strengthened their ability to clearly speak out about corruption in the government units. 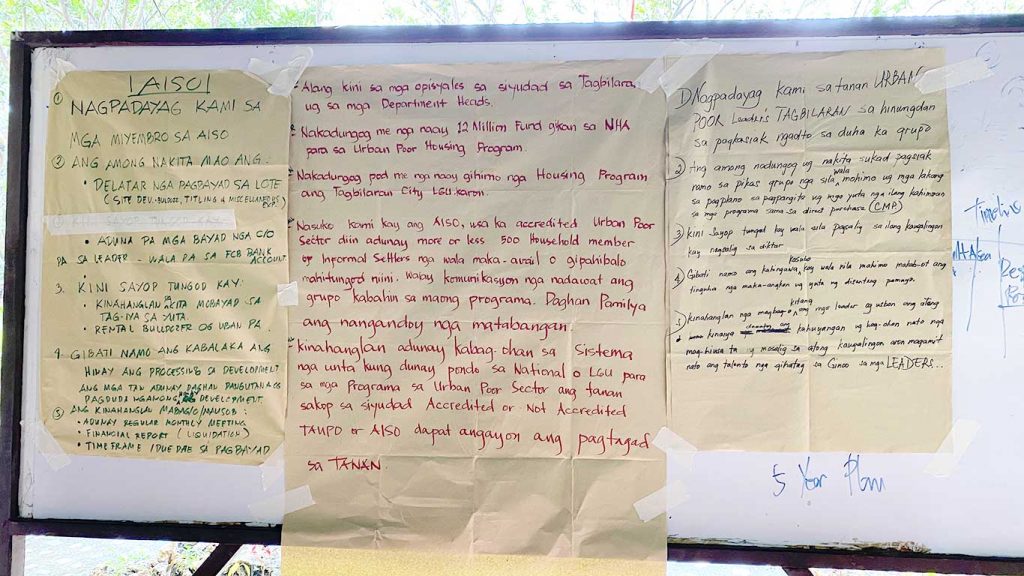 SPEAK OUT TO THE MEMBERSHIP ON TARDINESS OF MONTHLY PAYMENTS
We are speaking to the members of Alliance of Informal Settlers Organization (AISO).

We experience the delayed payment of lots for site development, titling, and other miscellaneous expenses. Some of the fees were under the care of the leader and are not entirely deposited into the FCB Bank Account (bank designate of Alliance of Informal Settlers Organization – AISO).

This act is wrong because we are paying the land installment to the owner, and we need to rent bulldozers and other equipment to develop the land. We feel worried about the slow development of the land, and with this, people start to ask questions and doubt us because of the slow processing. What needs to change is that we need to hold regular monthly meetings with regular payment of expenses, financial reporting, and reconciliation of accounts.

SPEAK OUT TO TAGBILARAN CITY OFFICIALS

To the public officials of Tagbilaran City and the Department Heads,

We heard about a 12M peso fund from the National Housing Authority for the Urban Poor Housing Program, and that the Tagbilaran City Local Government Unit crafted a housing program.

We feel angry because AISO (Alliance of Informal Settlers Organization), an accredited Urban Poor Sector with about 500 member households of informal settlers, was not informed or able to take advantage of this program. The group received no communication about this. Many families longed to be helped.

The system must change so that when funds are available from the National or the local government unit for the urban poor sector, everyone will have equal access to it. All the members of the city urban poor group, whether accredited or not, will be given attention.

SPEAK OUT FOR THE URBAN POOR LEADERSHIP IN TAGBILARAN

To all the Tagbilaran City urban poor leaders,

We heard and saw that since we formed two groups, the other group did not make plans and move to look for a piece of land that they could purchase directly. This is wrong because you did not show confidence in yourself, and relied on others’ dictates. We feel worried and sad because you did not achieve the goal of being able to purchase land and live comfortably. We need to transform as leaders, change our ways, accept our weaknesses but also try to do the work to learn by doing. We need to believe in ourselves so we can use the talents God gave us to become capable leaders.

Note:  Kins Aparece, FPT-AWP Coordinator, would like some feedback on how the social transformation tools on Cultures of Peace are integrated into the communities. Those who are developing or integrating similar tools may contact Kins.