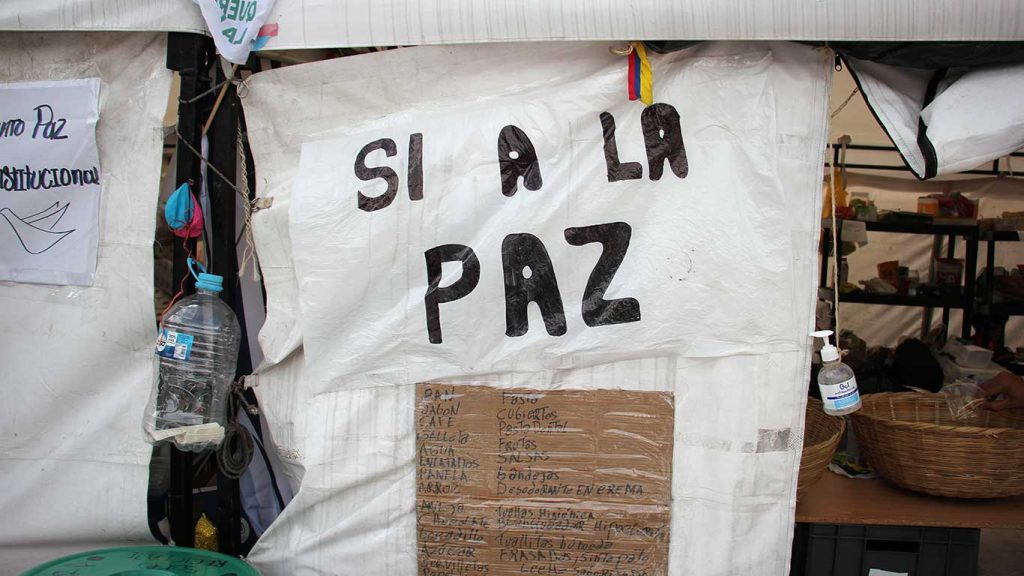 “This is the best time to make AVP more visible in the country.”- Gladys Cedeño.

Peace Accords: Understanding What is Going On…

While talks finalizing the Colombian Peace Accords call for a bilateral ceasefire between the Colombian government and FARC as well as the disarmament of FARC guerillas, achieving peace remains incomplete.

The Colombian government and FARC leaders are fine-tuning the political conditions for guerilla disarmament and reintegration into society, an agreement four years in the making. In mid-August, they hope to finalize a referendum and legalize it by September. The Colombian people will then vote on the stipulations.

The signing of the accords represents an end only to the 60-year war with FARC, the largest group of guerilla fighters, but does not end the conflict with other armed groups like National Liberation Army (ELN), Popular Liberation Army (EPL), drug traffickers, or paramilitary, who all continue to play their role in Colombia’s bloody history.

“This is not peace,” said Ricardo Esquivia, Founder and Director of Sembrandopaz, an organization that facilitates the construction of peace-building culture and capacity among grassroots organizations in Colombia’s Caribbean region.

The accords mark the need to create appropriate political reforms that stop armed groups from forming and the conflict from repeating itself. For true peace to come, however, the political reality must also address the rooted social conflicts that caused war and deal with the widespread post-conflict trauma across Colombia.

These changes not only need to be reflected on an institutional level, but also within and among citizens and communities.

“We will need to continue reconstructing from the base, from the communities and schools,” said Esquivia, who plans to do trainings with communities that explain what the accords mean so that community members can participate in the reparations once they are signed. 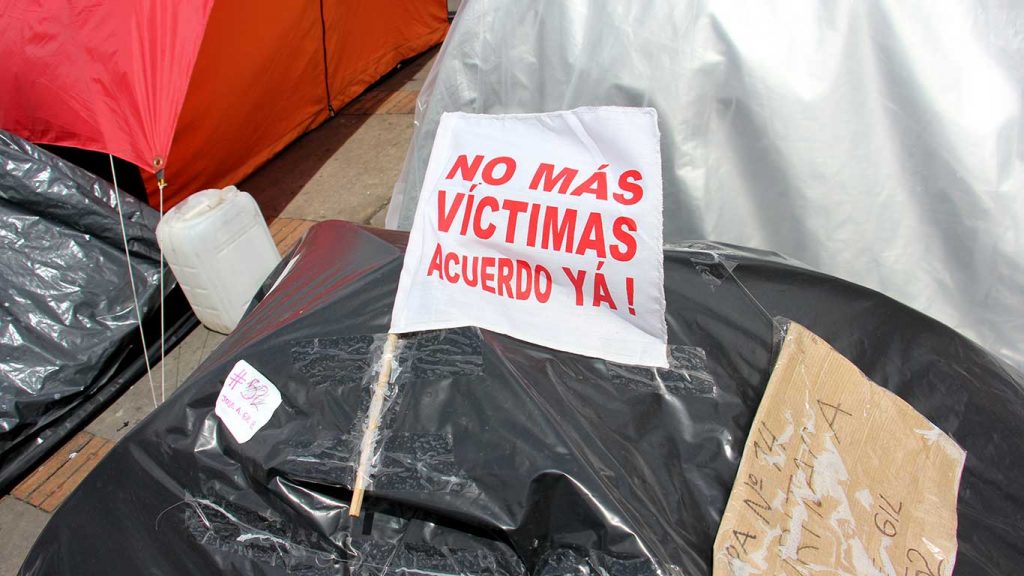 Why is Alternative to Violence Project in Colombia important to spreading peace in the wake of the peace talks?

For Alternative to Violence Project (AVP) Coordinator of Western Colombia, Gladys Cedeño, “the peace agreement is a starting point to work from families on increasing awareness and conscientiousness of what peace means”.

“It is the beginning of a profound and comprehensive work for peace and nonviolence, which generates the need to plant peace, to know strategies and alternatives in media and educational institutions,” said Cedeño.

Many AVP Facilitators believe that now is the time to broaden the scope of AVP workshops, believing that their focus on building communities and trauma healing will help bridge polarized groups as well as spread dignity and self-respect.

“The breadth of people who have been directly or indirectly affected by violence in this country is enormous. Indirectly everyone has. There is a lot of pain, trauma, fear, and resentment that really needs to be addressed if we are going to be able to live together,” said Paul Stucky, who was crucial in bringing AVP work to Colombia and currently works with the Center for Environmental and Social Studies (CEAS) in Bogota to assist local churches in work with victims and reconciliation.

“Our society is very polarized so the challenge is how to build bridges that make dialogue possible. How to build trust where there hasn’t been trust. How to go from a zero-sum game, a you win/I lose or I win/you lose game, to find a place where we have something to contribute and have that contribution be recognized,” said Stucky.

“The AVP training and workshops are very helpful in building community among participants, giving skills for people to recognize their own personal value and the value of others. This is the essence of what human rights and dignity is about: the ability to communicate and talk to each other in constructive ways and begin to think about communities. AVP has a lot to contribute in terms of building communities as well as trauma healing. This is very important,” said Stucky.

Wiflredo Benitez, an AVP facilitator working primarily in Bogota, held a workshop where two participants from opposing sides of the conflict came together.

“It was a very beautiful experience because we had a person who had been a part of the guerilla and in the same workshop, in the same space, we had a commander of the paramilitary who had renounced everything. They didn’t know. They had no idea. They shared all of the exercises, laughed, and talked together. At the end of the workshop, the participant who was in the guerilla told the group about her role. In the other corner, the man raised his hand and said “ah! I didn’t know. I was part of the paramilitary in the conflict.” Everyone else was in their seats like oof! What a shock! But it was really beautiful. People who participated in the war also can be victims of the conflict.”

Benitez believes that AVP workshops in Ciudad Bolivar, where the majority of people are victims of the armed conflict and displaced from their homes, give agency to people in a seemingly powerless situation. For him, the workshops not only help participants overcome their trauma, but simultaneously redefines their role as a victim to one of an empowered spreader of peace.

“This is what we are gaining from AVP. The ability to show people that they have the capacity to have lived a very strong episode of violence but now overcome it and not just stay in their trauma or episode, but now to help other people to also overcome their traumas,” said Benitez 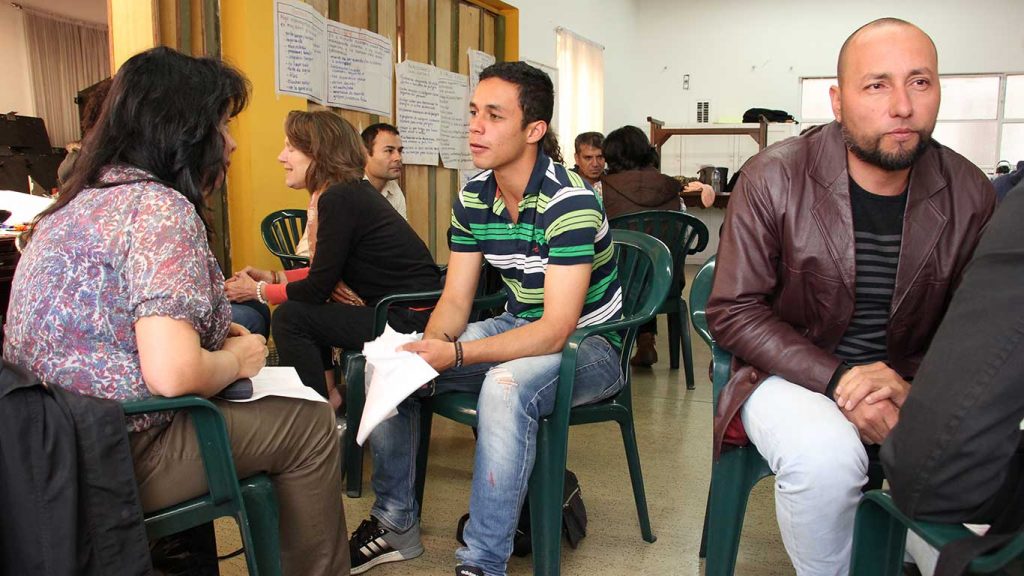 Photo from a Trauma Resiliency Training located in the Mennonite Church in Bogota, Colombia with community leaders

How will Colombian AVP facilitators utilize the momentum of the peace accords to spread workshops? What are the challenges they face?

Country Coordinator, Manuel Garcia, believes AVP workshops will be useful in various areas of the peace building process. In July, he represented AVP in various conferences like Caribbean Network for Colombian Peace, a forum on educational strategies for peace, and a conference on employment, peace and development work. “We are participating in forums, workshops, conferences around the theme of peace, now almost all areas are talking about peace,” said Garcia.

Spreading AVP, however, will requires an increase in awareness, workshops, and new facilitators, issues that at times have been impacted by lack of funds, time availabilty and travel capacity.

“We are working internally on this,” said Cedeño. “In the latest six workshops that we have done [in Western Colombia], we are involving new facilitators to prepare them. How are we going to do it? Everywhere that requires it.”

Many predict that the transition will initially be unfavorable and there will be increased citizen unrest and political problems.

“The changes that are coming for our region, which is located near areas of armed conflict, will initially be unfavorable due to the increase in a population that is unemployed and the violence will increase,” said Cedeño.

“Everyone will protest and it will be very hectic,” stated Esquivia. “Currently, you can’t protest because you will go to jail. They will say you are an accomplice to the FARC. Protests will make a come back. The people will make demands. We will see a lot of movement. The government needs to prepare itself. The expression will be very strong.”

As Stucky noted, however, “it is encouraging and positive that how in spite of so many years of this conflict, that so many people are committed to nonviolence. A tremendous number of civil society organizations are working for peace and human rights. Amazing that it has remained strong, that despite dangers and disappointments, people continue. Preserving hope in that way is very important. I think in that sense the peace accords will help to make this kind of work possible.”