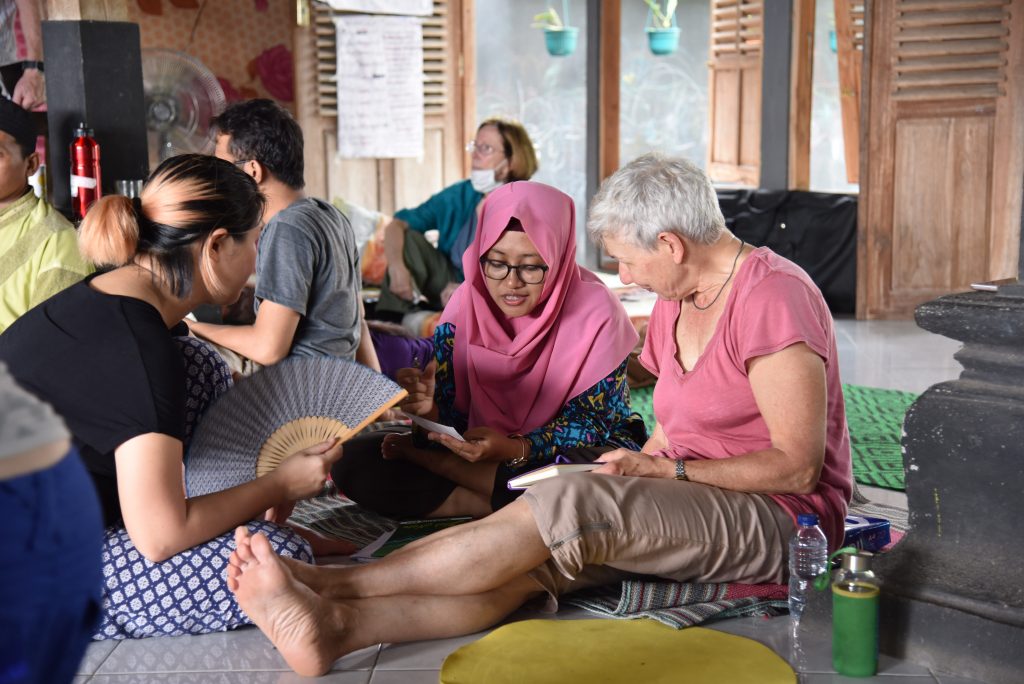 Creating Cultures of Peace Training had 47 participants from 11 countries!

It is impossible to really understand the experience of Peace Place Pati other than through sharing the experience, over long days with many hours, in deep discussion. When we arrived at the subject of “Violence and Conflict Solution”, I tried to hide my sense of helplessness. But it was unnecessary: we were all in the same boat.

In order to connect to the “transforming power of other people”, I needed to learn to trust others. This, then, became my mantra. And for twenty-four hours a day, over ten days, I put it to the test. I had no choice but to battle with my defences; peeling away layers of unhelpful protective gear. Memories of fear and of anxiety dropped away; dissolved by the emotional surround. It was the safety net provided by those around me that I needed; the experience of their transforming power.

And how does all of this lead to peace, to non-violent conflict resolution and the healing of trauma? I found this piece of writing to be particularly helpful:

“To live in the Spirit is to act in the belief that love is stronger than death; in the belief that if we act in goodwill toward another we overcome our fear of them and their fear of us. And such action is the proclamation of peace. To live in the Spirit will mean moving towards being open to those modes of being, thinking, deciding and acting that are empowering from within, rather than controlling from without, for ourselves and for our neighbours.” (“This we can say”, Margaret Bearlin, 1984)

I am grateful for the life-changing International Peace Training I experienced in Indonesia; for the many opportunities I had to grow as a person, immersed in the Power of Goodness stories; accompanying young children and learning with them, and for the hands-on exposure to permaculture.
I am confident I can consciously implement the changes necessary for peace in my life; thus keeping me connected to those life-giving experiences. I knew I needed to do more than put on a brave face for this training. I needed to co-create courage with those around me. 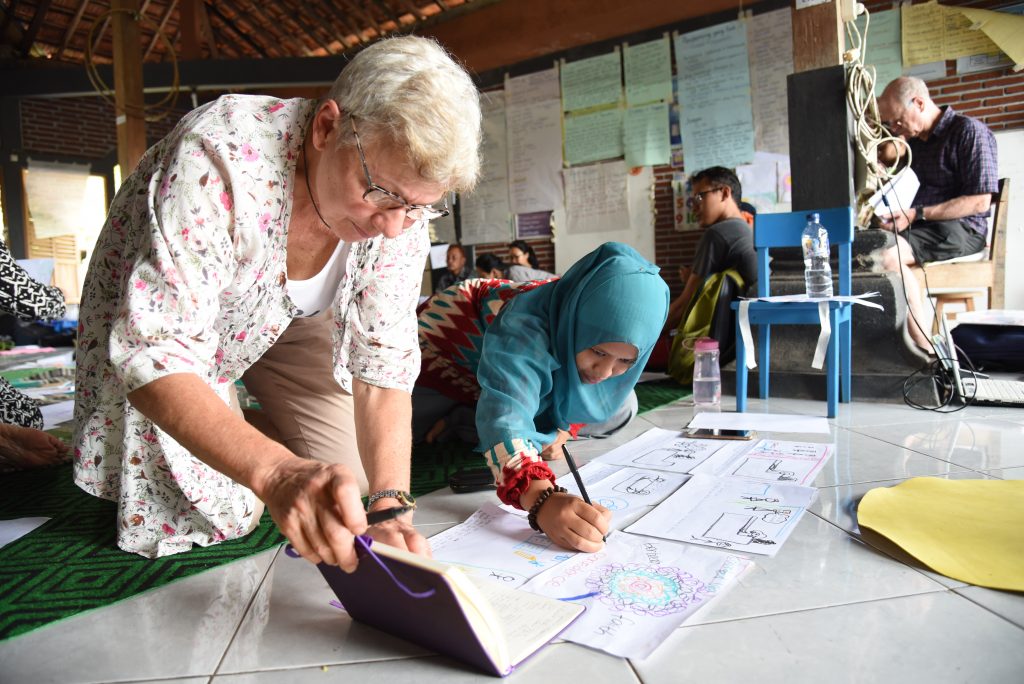 This is the first year, over a dozen seriously engaged peace workers had to be turned away, seven from Africa; and it’s the second year we had nearly 50 participants. Some participants had begun practicing the tools in their daily lives and work. The results they experience have dramatically increased their dedication to inviting others in their communities to practice with them at home. Other participants attended for the first time. This range of experience is widening beyond the team’s capacity to manage. The team feels the need for regional leadership trainings, both mono-lingual local groups and multi-lingual global groups, in addition to training for newcomers.

In the past we offered empowerment and resiliency and added one special topic, but this year we covered all four core topics: 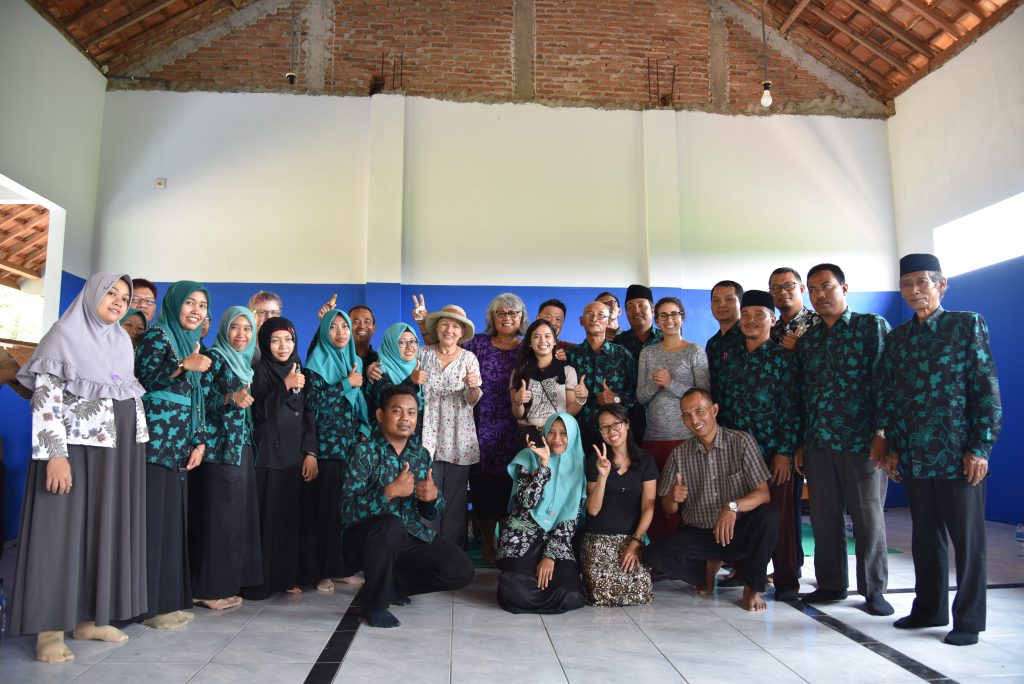 In addition we added two special topics: the Power of Goodness and Permaculture. Permaculture was of tremendous interest. Over 25 participants got up very early each morning to attend a permaculture group before the training sessions and undertake tasks. This required more work and attention than special topics usually took.

A mid-week heat wave became excruciating. Some of the participants – not used to the Indonesian climate –  became dehydrated or got heat stroke adding an additional strain.

The critical mass of English speakers drew the group into a speed and ease of English speaking the group have not experienced before. Non-English-speaking facilitators would give instructions multiple times because the group was not listening to them. The interpreters gave up. Nadine noted to the group that when we spoke Indonesian first they waited for the English, but when we spoke in English first the group began talking and acting and did not wait for the Indonesian.

Pointing out the dynamic usually is enough to correct it. But between the heat, increased activity, and single-language interpretation, for the first time the team was not able to maintain our multi-lingual commitment with ease and grace. The Indonesians increasingly relied on Nadine, who was just recovering from a concussion and an embolism. She became irritated in the last couple of days at the sense of disregard for the interpreter and the group. She called attention in terse ways that did not feel peaceful or respectful, when the group itself was tired and stretched thin. For this, Nadine deeply apologizes. We gained a new respect for the challenges of our commitment to multi-lingual-rich environments.

For the future, the team therefore agreed to:

The stresses did not diminish the tremendous value of the incredible training in peace, nonviolence, storytelling and permaculture, however. The gracious sharing among amazing participants was life-changing! We went home invigorated to take on the new challenges posed by the global expansion of faith in peace and dedication to practice.