By Musa Akmadov — Set in Chechnya 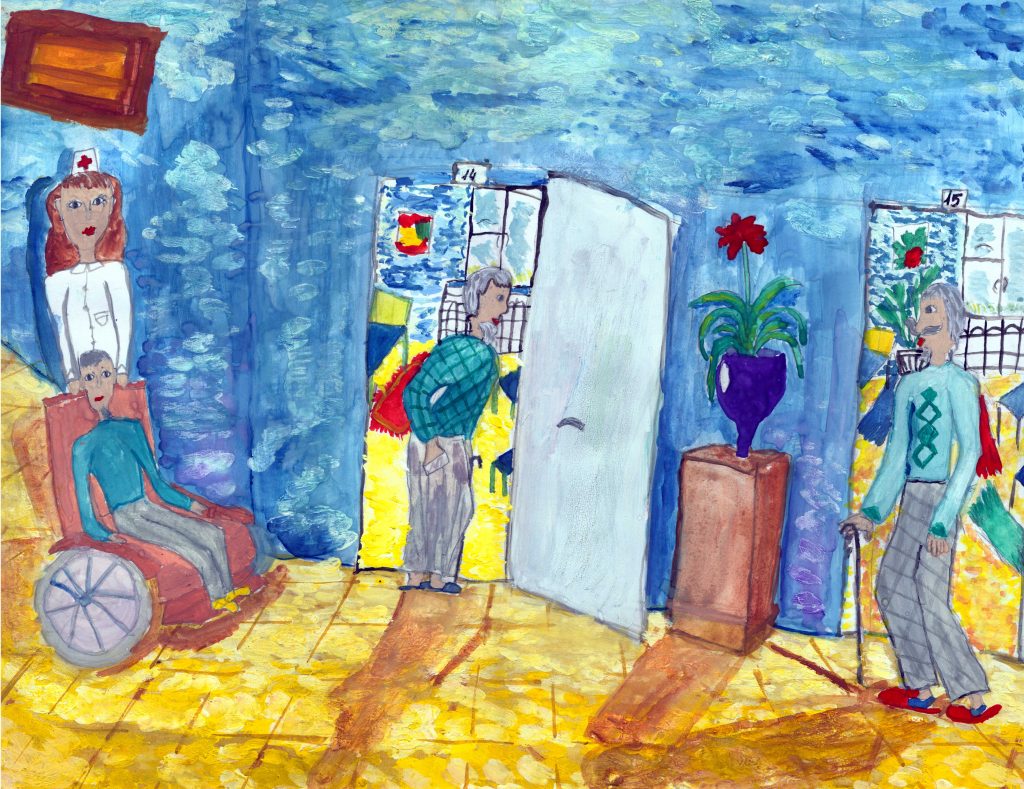 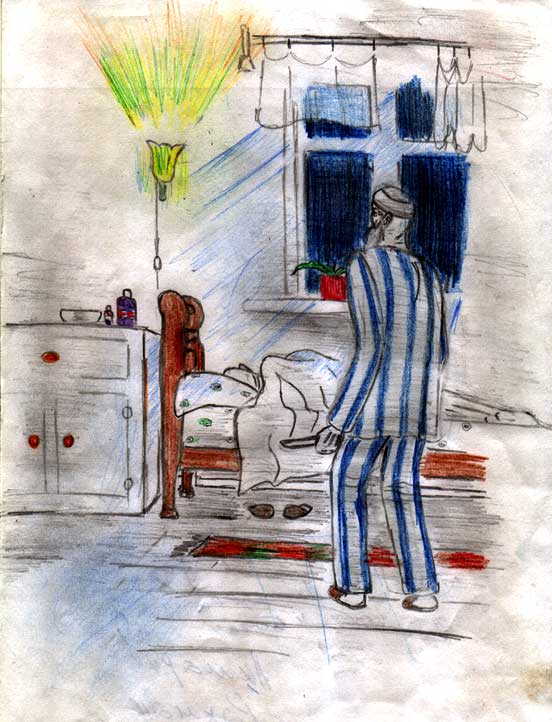 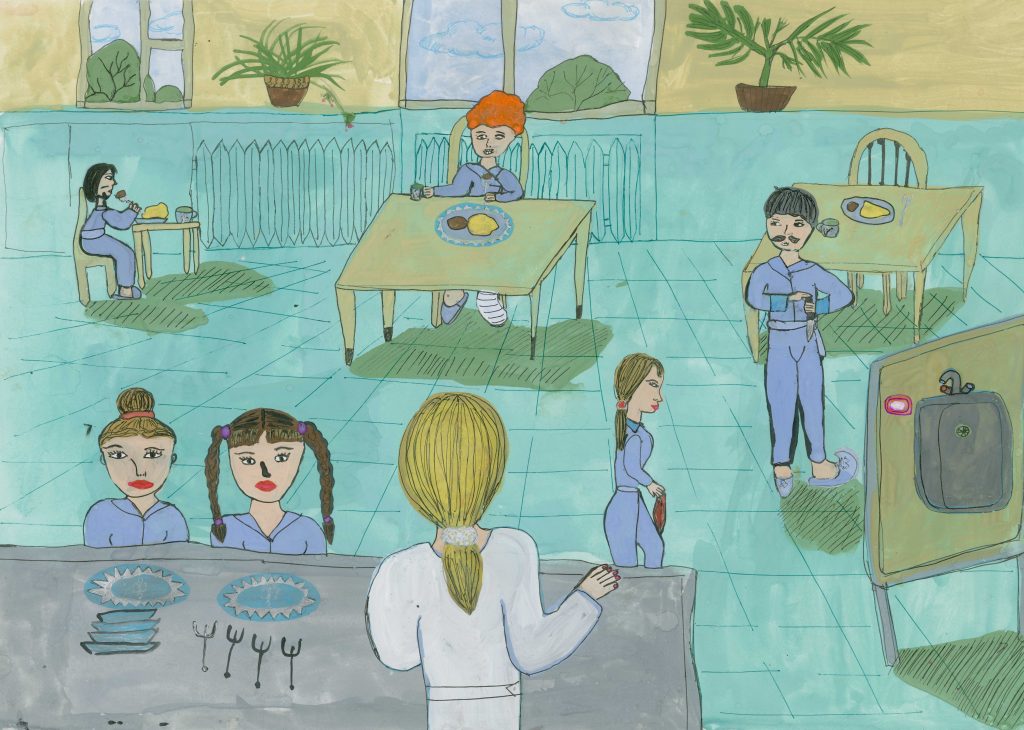 In all his long life, Bocha had never been really sick. Now he was a patient in a hospital for the very first time.

His doctor said he needed an operation. At first the old man resisted. After all, he did not have much longer to live; it would make more sense to just keep going as long as he could. He might die on the operating table. His objections subsided by evening. “You never know,” he thought, “I might just get better, instead of dying straightaway.”

That night, for the very first time in years, he dreamed of his dead father. The dream woke him up and he could not get back to sleep.

When the first rays of the sun burst cheerfully through the window, they lit up the face of the old man, tormented and worn out with lack of sleep. Bocha sat up, looked through the window at the clear blue sky and murmured softly, “As you can plainly see, Father, I still haven’t built up the courage to come and join you.”

He was much better soon, thanks to the care of the doctor and the nurses. When he was stronger, he began to think about how he could thank the doctor. When the doctor came to see him, he always did his best to say something pleasant, trying to show reverence and respect. But that was not enough. Once he instructed his son to bring a good slice of dried mutton from home, then he chose the right moment to present it to the doctor.

At first Khaid refused to accept the gift, but then he saw how deeply the old man was hurt. So he thanked him and took the meat away. All the same, Bocha realized that this was not the right gift.

He thought about how to find some special gift for the doctor.

That evening, while Bocha was talking with one of the other patients, the other said, “Did you know that our Khaid’s father is a patient in this hospital?”

“Can you tell me which ward?” Bocha asked.

Bocha set off immediately in search of Ward 15. He could not wait to show some kindness to Khaid’s old father. At least he could chat with him and tell him that his son was a distinguished and much-respected man. He found no one in Ward 15. But another patient asked, “Who are you looking for?”

“Our surgeon’s father? He’s the one you want? Just wait. He’ll soon be back. Look there he is now.” A man came down the hall. His face was as pale as the wall, and his legs could hardly carry him. He was tall, with big ears and a small beard. Bocha thought he must have seen him before. When the man coming down the corridor looked straight at him, shock made Bocha’s face turn white. The sick man turned and hurried into the ward. He had recognized Bocha, too.

Bocha was so shocked he could not speak. He rushed back to his own ward. Bocha sat down on the bed and tried to pull himself together. There could be no doubt. He had just seen the man he had been seeking for nearly 50 years. That man had caused the death of his father and two older brothers.

This is how it all happened long ago:

In those days Barznak, Dr. Khaid’s father, lived in the village of Varsh-Yurt. One day a girl cousin to Bocha and his brothers was out working in the fields. Barznak, who was drunk, grabbed her and kissed her. In those days such an act was considered a huge dishonor for the girl and her entire family. Zaman had no brothers of her own to avenge the insult, and so Baudi and Adnan, Bocha’s brothers, had to fulfill this duty. They got hold of Barznak and pulled off his trousers. The elders then made peace between the quarreling parties. That should have ended it.

But hate overwhelmed Barznak. He thought of nothing but revenge on Baudi and Adnan, but most of all on their father, Doka. So he accused Doka and his sons of helping enemy agents. People said that Barznak bribed an important state official to make the charge. Barznak and his friends gave evidence in court. Bocha’s father and brothers were sent to a labor camp where they died. At that time, Bocha was just 15 years old. He made a secret oath to avenge his father and brothers. But Barznak had left the village. From that day on, Bocha looked for him.

It was quite clear and plain. After many years, when Bocha was weak and sick, fate brought them together again. Lying on his bed in the ward, Bocha thought, “If only it had happened just 10 years ago! But never mind. A man is still a man, even in old age. Goodness must be repaid with goodness, and evil with evil.”

All through that day, two voices were speaking, arguing in Bocha’s heart. The first seemed to say, “But he, too, is very weak and ill.” The second, “So what? My father was ill, too, but they didn’t spare him. That villain destroyed three people. How will I be able to stand up and face their souls, if I do not avenge them?” The first, “His son saved my life.” The second, “True, but there are a lot of doctors. Some other doctor would have done the operation.”

The voice telling him not to kill seemed to be right. No matter how much Bocha resisted, that voice kept sounding louder. Bocha decided to silence all his doubts. He would get hold of a knife.

The dining hall was almost empty. Bocha did not eat anything. He went to the table where they were cutting bread, took a knife, hid it up his sleeve and hurried out the door.

That night Bocha lay still for a long time with the knife under his pillow, then fell asleep remembering his anger, his father’s pain and how helpless he had felt. He twisted and turned with bad dreams and nightmares. He woke up in a sweat, glad it had only been dreams. Then he remembered the knife under his pillow. “Never mind,” he thought calmly. “I must do my duty. I must avenge the death of my kinsmen.” He got up and hid the knife in his pajama sleeve.

The moon lit up the ward with its pale light. Through the open skylights, Bocha heard the lime trees murmuring in the wind. Bocha quickly slipped through the door. The halls were totally silent. It was three o’clock in the morning. Like a sleepwalker, he made his way towards Ward 15. He never heard the sounds that came through the half-opened doors, the coughing or the snoring. All he could hear was the deafening silence.

At last he came to Ward 15. Bocha looked through the window. Barznak was lying on the bed next to the window, coughing and muttering in his sleep. The light of the moon fell on his face, giving him a strange, unearthly look.

Bocha said to himself, “I’ll open the door quickly and rush him.” Something made him hesitate, “As soon as he turns over onto the other side, I’ll go in.” Just then, Barznak turned onto the other side. Now there was nothing to hold Bocha back! Why did he still wait? Ah yes, a patient suddenly came out of the next ward and walked down the corridor. Bocha pressed himself against the wall, and the man went by without seeing him. “I’ll just wait till he’s out of sight,” Bocha said to himself. Then he thought, “No, it’s better to wait until that patient is back in the ward.”

When the patient from Ward 14 came back and closed the door behind him, Bocha did not have any more excuses to put it off. Barznak was lying with his face to the wall. He, Bocha, was holding the knife in his hand. What more does a man need to avenge his kinsfolk? He forced his legs to move. He turned the door handle and half opened the door into the ward. Then he stopped. He stood still with his back against the wall and realized that he would never be able to carry out the plan.

For just when he drew the knife and started to go into the ward, a vision of the good doctor appeared to him, stopping him, forcing him to back off. “How do you feel?” the good doctor in the white coat sitting by his bedside was asking him. “Everything’s fine. You’ll soon be on your feet. You’ll have to put off dying till another day. Now then, let’s check your pulse.” He felt the touch of Khaid’s sensitive fingers on his arm.

All of this vision took place in a single second. The knife made a noise when he threw it on the floor, but nobody woke up. Tears ran down Bocha’s cheeks. He felt angry and helpless. He wanted to howl at the top of his voice throughout the sleeping hospital. The feeling of revenge that had driven him for decades was overcome by the power of compassion.

He could never lift a hand against the man who had saved his life. This new understanding was to be his gift to Dr. Khaid