Skip to content
Beginning a Peace Movement in Malaysia: A Personal Reflection

Beginning a Peace Movement in Malaysia: A Personal Reflection 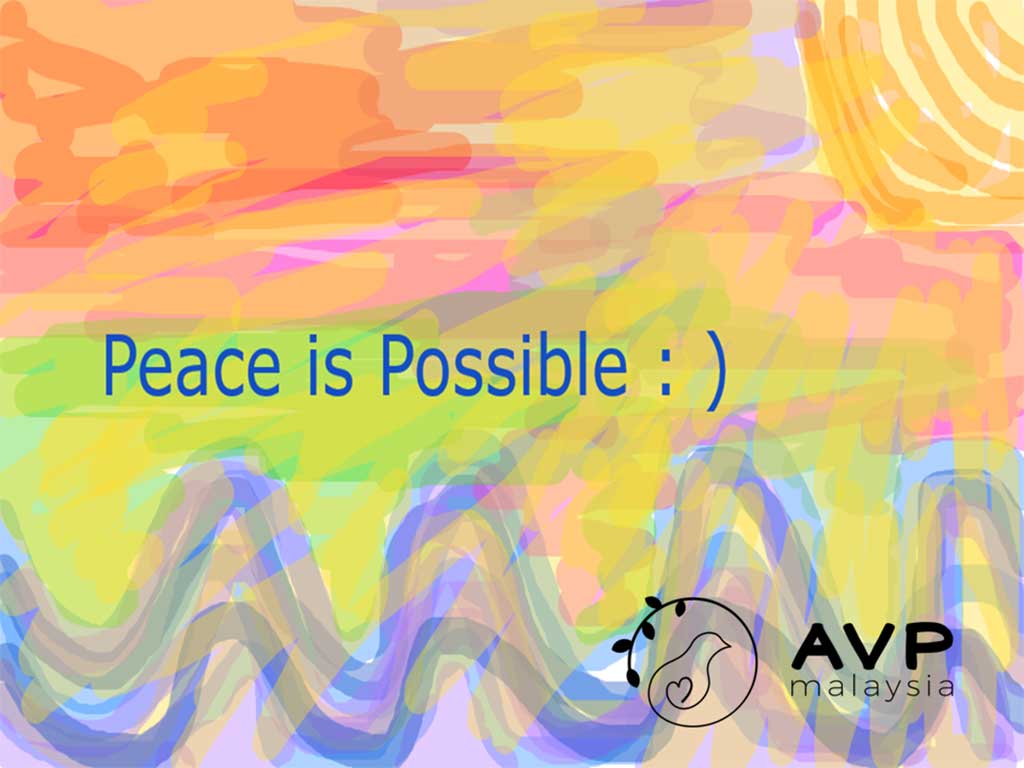 Melanie’s core self (A core self is one’s inner self that is whole, healthy, good, capable, and joyous.)

Nothing happens by chance. Take a step at a time even if you feel unsure. In time, all will become clearer. These are my life lessons as a pilgrim on earth.

I wasn’t certain when I started offering online introductory Alternatives to Violence Project (AVP) sessions using the Zoom accounts of Nadine Hoover and Chris Hunter. Since AVP was new in Malaysia, I had thought that it would be a good step to offer these sessions as they might build interest in practicing peace among people in my community. However, after several months of conducting these sessions, I had more global participation than local participation, which was discouraging.

I felt bothered. I reflected on this emotion, and realized I was focusing on how many people I could get to join the sessions. So what is my real work? Is it just organizing and facilitating sessions? I believe it is more than that. My everyday work of peace is to engage others and build friendships. After that insight, I continued to reach out and keep people informed of AVP-Malaysia activities, but with a more joyful and serene attitude. I also asked for friends’ help to personally connect me to those working in non-governmental organizations. I made an effort to get to know them. I showed my interest in their lives and in what they do. Slowly, I was building and strengthening my friendship with them.

When I received funds from the European Union to organize an online Creating Regenerative Cultures of Peace Empowerment Workshop, I felt hopeful that there would be sufficient people from Malaysia to attend the workshop. I had less than two months to prepare. But in every conversation, I only had one goal in mind: to get to know the others better. So I listened to them with curiosity. I took the time to ask about their lives. Somehow during those conversations, they would also ask about my life and the things that I was doing. Naturally, I would talk about AVP-Malaysia and the upcoming workshop. Not only did some of them sign up for the workshop, but they also reached out to their communities and asked others to join the workshop.

Out of the blue, a friend, whom I had not spoken to for a while, called me. Instead of just exchanging pleasantries, I spoke simply and truthfully without fear of making mistakes when I told him about my struggle in getting people to join the workshop. After our conversation, he contacted several of his friends and informed them about the upcoming workshop. A few of them signed up for the workshop, which in turn, led to their friends signing up too. My good companion, Kins also reached out to her friends in Malaysia. One of them signed up and invited more friends to participate. Soon, spaces in the workshop were filled and some people had to be placed on a waiting list.

It was humbling to see this movement of peace gaining momentum in Malaysia. It would not have been possible without the support of my good companions among the Friends Peace Teams Asia West Pacific family and friends. My good companion group, daily peace practice, as well as encouraging words from others have sustained me when the movement was not visible and seemed to go nowhere. Looking back, I am thankful and in awe of this journey thus far.