Baldev Who Modeled How to Practice Peace in Public Life 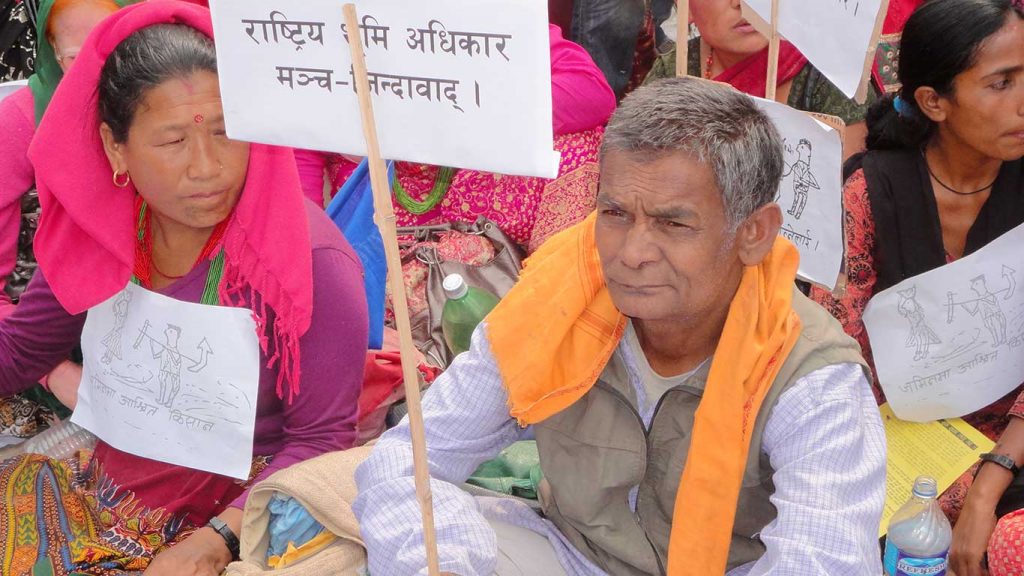 Baldev (in orange scarf) at one of the sit-ins to protest for land rights in Nepal. Photo by CSRC Nepal.

Thousands of land rights activists, including Dalits (so called untouchables) remember the late Baldev Ram for his courage, commitment, and leadership for the rights of landless people in Nepal. He died on August 1, 2017. During the first week of August, our friends in Nepal Community Self Reliance Center and National Land Rights Forum have organized events to highlight Baldev’s campaign and vision.

Baldev Ram belonged to the so-called lowest caste, lived with very little financial means, dark skinned, noticeably tiny body, and always wore minimal cotton cloths. And, he successfully modeled the practice of transforming power in public life to challenge the generations of exploitation, oppression and injustice to thousands of landless and land-poor people in Nepal, many of whom belong to the dalit community.

Friends Peace Teams in AWP joins CSRC and NLRF in acknowledging our respect for Baldev and the land rights movement that he inspired in Nepal, which we now feel part of and support.

Baldev belonged to the so-called lowest caste. He worked as an agricultural worker on a landlord’s land from childhood to his final days. Baldev started his activism for the rights and justice of landless people and bonded labor at the age of 14, and faced 24 charges over his lifetime. 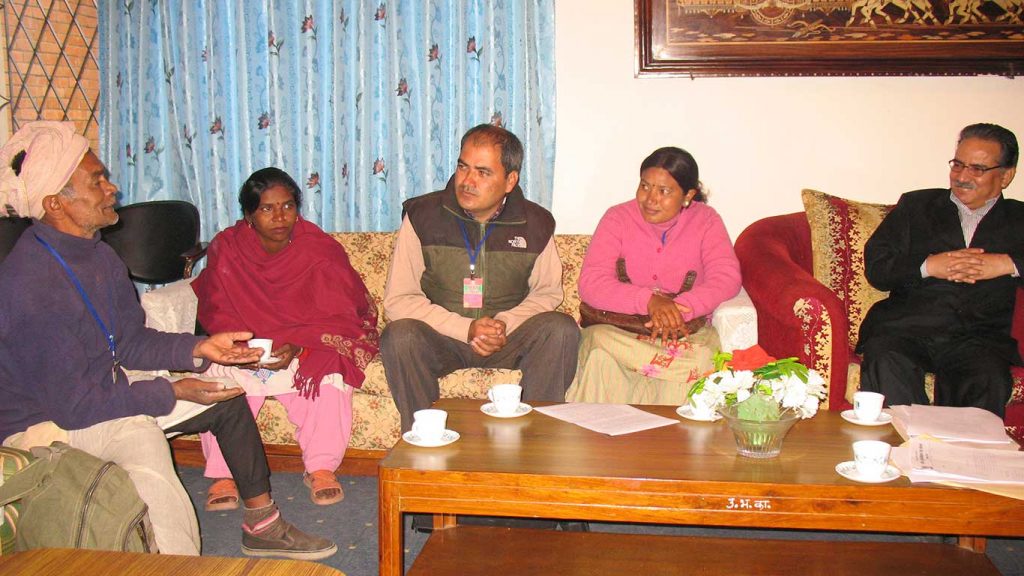 Baldev Ram, first from left, leading a deligate to meet the Maioist supremo Prachanda to lobby for the rights to the landless people in Nepal. Photo by CSRC Nepal

Baldev was the founding Chairperson of the National Land Rights Forum, a landless people’s organization comprising over a hundred thousand members, and struggled for their rights for decades. He blew the whistle and later launched a successful  ‘Carrion Boycott’ campaign against an inhuman practice that forced Chamars (a kind of Dalits) to dispose of cattle carcasses in his district. This campaign declared, ‘we are human too like you, we also have dignity’. This campaign significantly uplifted the respect and dignity of the Chamar people, a Dalit group considered to be the lowest caste in social strata. This campaign ended the mal-tradition of forcing the Chamar people to handle animal carcasses.

Baldev led several local, regional and national assemblies, marches, and sit-ins to campaign for landless and land poor people: to increase the wages, against untouchability, and for the rights of Haruwa-Charuwa and Haliya (forms of bonded labor in agriculture). He led a Satyagraha sit-in with about 400 Dalits in his district for democracy and land rights, which ended up with a march of about 20 thousand Dalits.

Reflecting on Baldev’s life and learning, Creating Cultures of Peace (CCP) facilitator and land rights activist at CSRC Kalpana Karki says, ‘living in simplicity and honesty gives courage to speak up to both the people at grassroot and people in power. Baldev never wore slippers or shoes, owned very few simple clothes but there was always an energetic vibration when he talked with landless, poor people in the communities or the Prime Ministers; everyone listened to him with respect and care. He also never forgot where he came from. Whenever he got free time from his struggle for justice, he used to go back to work in agriculture in his village.’ 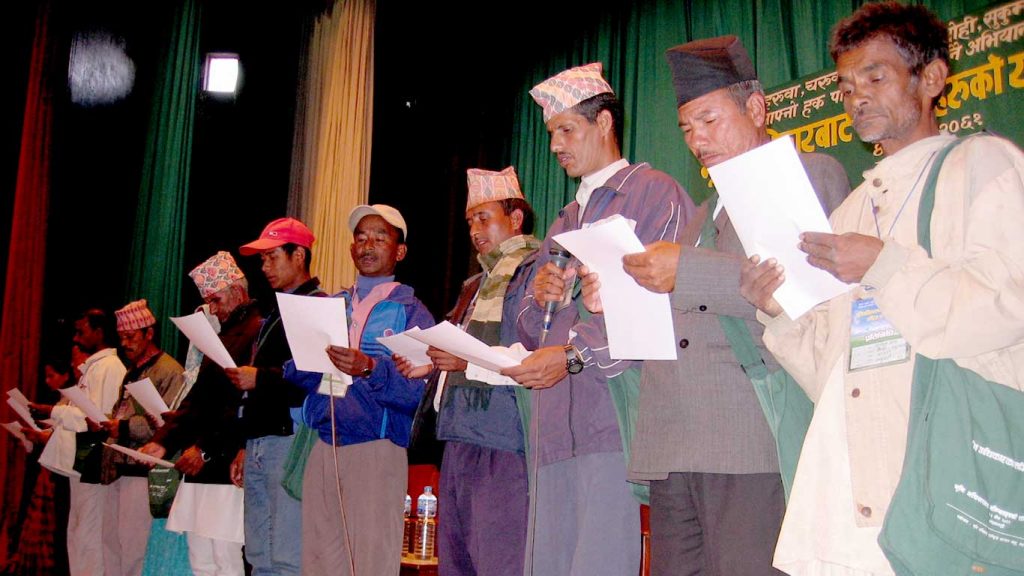 Baldev Ram, first from the right, taking oath as he was elected the first Chairperson of the National Land Rights Forum in 2004. Photo by CSRC Nepal.

NLRF activist and CCP facilitator Nari Ram Lohar- who also belongs to a so-called lowest caste- says, ‘Baldev is a model inspiration for the NLRF activists. He produced his own food and vegetables as he was offering leadership for justice. He was successful to transform his anger and frustration towards discrimination and exploitation for people like him into a powerful movement. There was simplicity, truth, honesty and intensity in his words, expression and living. His deep understanding about the situation and vision to liberate landless, Dalits and oppressed people gave him courage to question the system.’

He has been an exemplary activist for many of us. He exemplified how the rights and welfare of the masses is more important than personal gain, how to speak out truth to the people with power and privilege, how a person with no privilege or power can challenge and change wrong systems, how we can practice peace and nonviolence in our public life, and how to light the candle of hope among those in the lowest social strata.

Friends Peace Teams in Asia West Paficic expresses its respect to Baldev, offers solidarity with the ongoing struggle for the rights of landless people including Dalits in Nepal, and is delighted to have a close relationship with the movement in which Baldev was one of the key persons to look up to with trust and hope. Subhash, AWP contact in Nepal, has been contributing to the movement for many years now. The Friends Peace Teams AWP team led by Nadine Hoover was invited to facilitate Creating Cultures of Peace workshops for the core leaderships of the land rights movement in Nepal in November 2018. We hope to continue to build on our friendship for the shared concern for peace and justice.