We took a ferry from Padang, West Sumatra, to the Mentawai Islands off the west coast of Sumatra. Our base was the Saurienu village in the centre of Siapora Island, where Friends Peace Teams was invited to hold Alternatives to Violence Project (AVP) workshops primarily with pre-school teachers with additional training on Developmental Play. Indonesian speaking facilitators were Nanik, Petrus, Nadine, Rini, Homelia with the support of Juniarni. Facilitators without Indonesian were Annie Dusseau, Renee Bove and Valerie Joy.

The invitation was received from former Deputy Governor Rijel Samaloira (married to Ruth and with extended family) who 3 years ago settled in Saurienu because of its central location and access to clean water. We arrived the week he was defeated in the local election for Governor. His supporters collected significant documentation of illegal actions by the successful candidate to submit to authorities in the central government: votes were purchased, ballot boxes from rural communities predominantly voting for Rijel were destroyed with police present and even participating, and people were beaten for voting for Rijel. Background: In 1999 Mentawi became its own regency. Up until 1957, the population were all animists. At the insistence of the U.S. government, the Suharto regime decreed that all should take on one of three faiths, Muslim, Catholic or Christian, to prove they were not communists. Because people liked eating the local wild pigs, the majority opted for Christianity. Overall there are 10 counties containing 43 villages. Until recently there was little infrastructure, including roads, making travel by boat the easier option. Now roads are improving which enables the expansion of education and commerce. There is even an airstrip expanding on Siapora, particularly to serve the international attraction of prime surfing conditions off the north tip of the northernmost island. This all but destroyed the local culture. People had no knowledge of farming, textile making, or metalwork at that time. Present day farmers are growing rice and vegetables, harvesting coconut harvesting and fishing. Cloves produce a lot of wealth, but were put into disarray when Suharto’s son declared a monopoly on clove sales. The Mentawai people are still recovering, because of their great dependence on clove sales.

Now certain art forms are being reclaimed and documented.

In Mentawai, we talked with them about their efforts to establish a framework for basic human rights, looking for more resources for infant mortality and childbirth education. They talked about using traditional health practices and about needing trained midwives and education in transitioning to more advanced medicine. Public campaigns are in place for self-reliance, food security and women’s rights. Each village receives approximately $10,000 a year for their local development. There are no campaigns, however, for quitting smoking, which is rife in much of Indonesia. 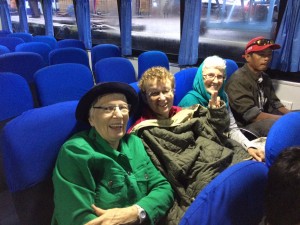 On our way to the Mentawai Island – Anne Dusseau, Renee Bove and Valerie Joy. 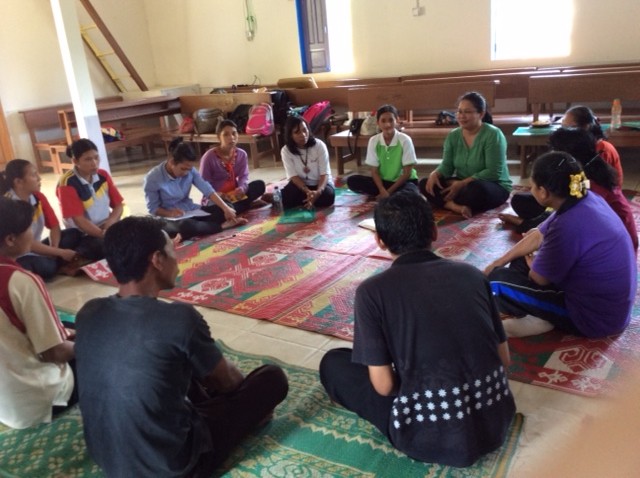 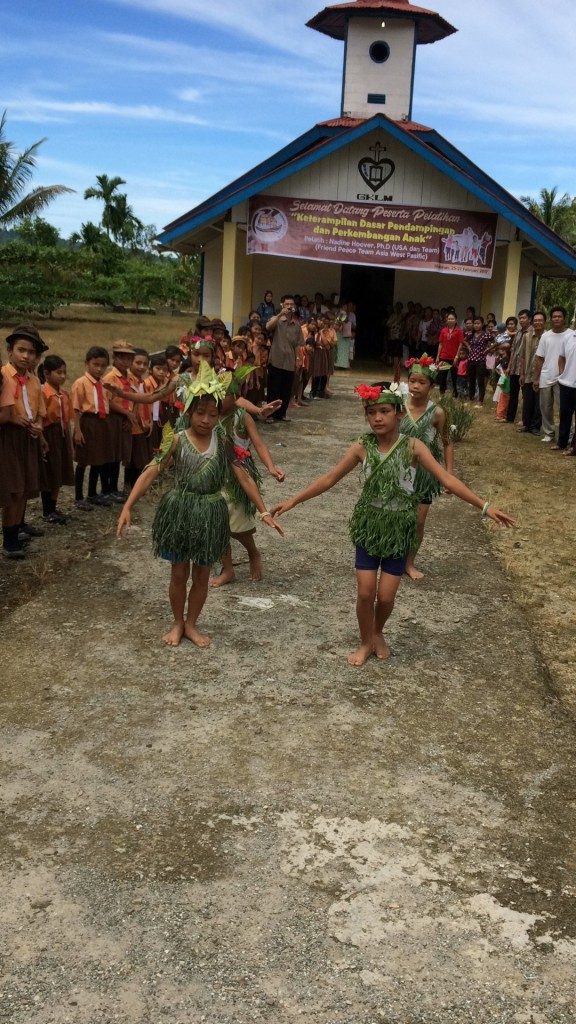 Rijel has a PhD in Economic Development and Politics and is a great believer in education as a means to lift people out of poverty. He sees the benefits of starting with the youngest children, hence he supports training for preschool teachers. Mentawi is the poorest area of West Sumatra, with little assistance from the government in education. During his term as Deputy Governor, he has secured 500 scholarships for local children to go to Padang, Jogya or other places for higher education, including doctors, nurses and teachers. They must then work for three years in rural areas of Mentawai.

Rijel successfully fought the establishment of palm oil plantations. He was detained and tortured. Others were also captured and tortured and he fought for their release also, after which he organised campaigns in human rights and environmental rights.

In 2009 he met Petrus and became involved with SHEEP. He owns a house on Mentawai, which is now used as the local office for this NGO. He found that Petrus shared similar values for the importance of education. He said violence permeates every day life and shuts down creativity, one of the main messages of AVP.

The group was given a whole of village welcome, with children’s dancing and speeches by Rijel and other local dignitaries. The local Lutheran church serves as the centre of community activities, since there are no other public buildings. Rijel’s home serves as a base for much community consultation. There is a small roadside stall, selling fuel and small necessities, but apart from that people are self sufficient with food and water.

Workshop: The Basic Workshop was held over one full day and two half days with a total of 18 hours. There were 27 participants from many districts on the island. Some had a 90 minute motor bike ride each way. Rijel’s family provided cooked food. My favourite was the Mung Bean porridge (mung beans, coconut and ginger). Rijel attended the majority of the sessions, but was also taken up with preparing the case of the corruption in the recent elections. His wife Ruth attended initially, but then got busy supervising the cooking and tending her baby. Many participants arrived slightly late, after harvesting rice and finishing their other domestic duties. Emphasis was made on “care of the self, the community and the 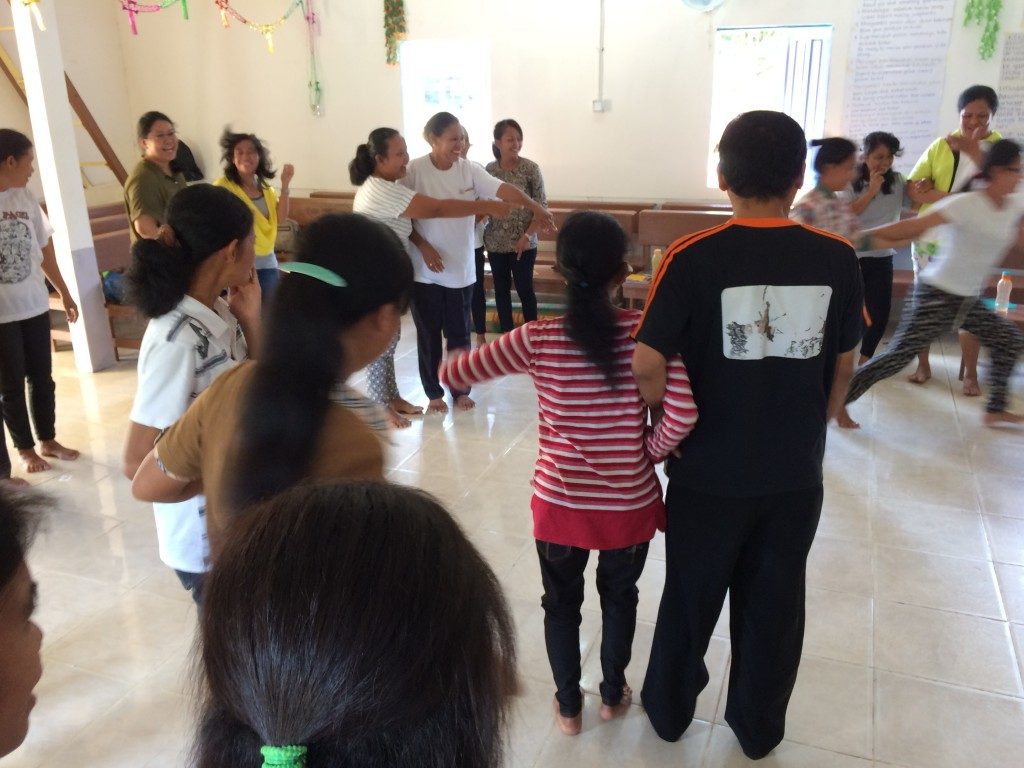 Cooperative agreements exercise discussed their culture of being “nice,” but importantly focused on “what is honest.” Positive adjective names came next. In the afternoon, the Gathering topic was “a place I felt safe as a child.” Good Listening was brainstormed and practiced, through sharing in pairs and then fours. The L&L was Elephant and Palm Tree. Core Self involved everyone drawing their feelings around a time they felt totally themselves, at ease and happy. Then each person added their positive name and three words to describe themselves. These were read to the group before being posted up. How can this feeling be created in your home and school? Groups of 4 discussed this.

After this, to bring us to solid reality, we looked up and named 3 things we could see, 3 things we could touched and 3 things we could hear. The activity “What is Violence? What is Nonviolence?” was followed by Animal Parade. With the stories on violence we spoke about where we were, what happened, how we felt and when we knew it was over. Next was Bump Tag and later Sun and Umbrella. Concentric Circles was done with the whole group with Nadine translating. In the processing, the comments included – I learned patience; exchanging ideas is beautiful; I learned more from this school of life; we have different perceptions; life feels more valuable and has more meaning; enthusiasm; we share joys and sorrow. What will we take home from this exercise? I am going to listen more than talk; ask more questions. Nanik said that children from as young as two and a half can do this. As homework, people were asked to note instances when their behaviour had changed at home.

The following day, the Gathering was “something I learned from yesterday.” Some responses included: discussions with partners and children worked well using good listening; we don’t have to start angry in the morning; I am more self confident; it changed the way the day went by being on time; I am so grateful for this and see that my whole life can change; I’m safer at home and at school; am finding calmness in myself; we can face any problem if we use our hearts and a calm mind, without violence; listening to people and not fighting worked in the rice field, so I could let go; I was calmer with my children and talked to them about what we were doing and they want to participate too; I can be calmer and introspective and asked the children to pray before bed; My child said he would help me to pray; I usually give in to this person, but I risked standing up for myself; I feel like I’m changing, I can control myself better; I usually scream at the kids, but we are not going to do this any more; How to find the patience that is within me. I’ve had a tough time, but we need to help remind each other of these good things; I’ve experienced change and transforming power; Our family had a wonderful evening together.

We then did Broken Squares in groups of 5. In the discussion that followed, participants remarked: I felt egotistical. It was hard to balance attention to myself and to others. It was hard to give up my own square. I really liked noticing what others needed; working together was harder than I thought. When I gave up my square it was enjoyable. The last round, we were allowed to talk. It was more complex without communication. We followed that with Paper Tearing in groups of 5. Once you could see a pattern emerging you could go with it- this relates to day to day life. It took a lot of concentration to realise others might have a different idea; different groups have different patterns; a leader shapes the patterns.

Frogs and Crocs
Empathy: One problem I’m facing right now is….Processing: so many new ideas I hadn’t thought about before; when you take a problem inside, it’s tougher than you thought. People wanted empathy, not advice.
Affirmation Posters
Pattern Balls

Whispers: I felt touched with sadness. The harsh words stick with you for ever. We pass on our horrible experiences- using bad language to each other – this must change. Nanik said “our words can be encouragement. Words are seeds which will grow. We then all shouted positive words, clapped, hugged.”

Reflection on whole workshop: Petrus asked if participants would use both the structure and content of the workshop?

Opening of the Play Centre: This new building is located at the back of the church- equipped by Nadine, Nanik, Petrus, Rini, Homelia and Juniari with pre-school equipment eg water play, play doh, blocks, paints, blackboards, dolls etc. The teachers arrived and did writing and book making exercises and learned how to use the Centre. Homelia will be the ongoing resource person with assistance from Juniari. There is no electricity or water connected and it appears that the builders embezzled some of the allocated funds, but it will be an ongoing reminder of the learning which has taken place amongst pre-school teachers and an encouragement for them to go on experimenting with Play.